We had friends over for dinner on Saturday night, and the menu has a bit of Tex-Mex flair. I made vegetable-bean enchiladas smothered in a thick spicy sauce, an all-natural queso (cheese) sauce to be scooped up with crisp tortilla chips, and some colorful Spanish rice as an accompaniment. These were all recipes that had been long bookmarked and were just just waiting to be cooked up for the right occasion.

Here's a look at a plate I fixed up for myself the next day for lunch; these tasty leftovers were my sweet reward for a Saturday afternoon's cooking. 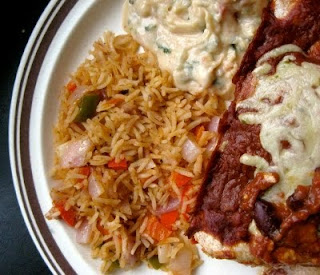 Recipe #13 is Enchilada Sauce, inspired by this post on Feasting on Art. This is a beautiful blog where recipes are often juxtaposed with classic works of art- a true feast for the eyes.

For this recipe, I added one more spice to my pantry: Mexican chili powder, which is a mixture of dried peppers, garlic, cumin etc. It is a very versatile seasoning.

The recipe bowled me over with its simplicity. You simply combine ingredients in a pot and simmer them down to a thick sauce.

2. Use an immersion blender to mix up everything smoothly.

3. Bring to a boil, then simmer until reduced.

Wow. This resulted in a thick, red, rich sauce. As the sauce was cooking, I made a quick enchilada filling with sauteed onions and red and green peppers, cooked kidney beans and some seasoning. To assemble the casserole, I spread some enchilada sauce in a 9x13 inch baking pan, folded the filling into whole wheat flour tortillas and arranged them in the pan, spooned more sauce on top (I did not need the whole amount of sauce), sprinkled some cheese and baked it until bubbly.

Recipe #12 is Spanish Rice, inspired by this recipe on Alosha's Kitchen. It is so very similar to the endless varieties of pulaos in Indian cuisine, only you start by toasting raw rice in hot oil until it is very well browned and nutty. Then some minced vegetables are added in (onions, pepper, garlic) and some seasoning (oregano, cumin powder) and vegetable stock to cook the rice in. The recipe has detailed step by step pictures and gave me great results.

Recipe #11 is Chile con Queso, inspired by this recipe on Homesick Texan. I've longed to try this recipe for months; it looked so good. A few years ago, I went through a regrettable food phase where I was buying jars of tostitos salsa con queso and eating it cold straight out of the fridge. This recipe is a much more civilized way to enjoy cheesy goodness on a chip. I followed the original recipe very closely, only substituting dried chipotle flakes for the serrano and jalapeno peppers. This recipe is a keeper, but I going to exercise my willpower and make it only very occasionally as a special treat.

We had a canine house-guest this weekend, a friend's little dog who stayed over while his people were out of town. I was hoping Dale would be a good host and share his beds and toys with our little guest, but here's what he did instead: squeezed himself onto the guest's tiny bed. Sigh. 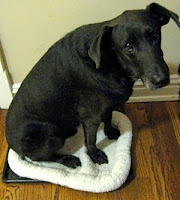 Have a great week; see you tomorrow.
Posted by Nupur at 7:20 AM