In my last post, I introduced the United Tastes virtual travel project that my daughter and I have started, and shared what we made for the four "A" states. Our alphabetical journey continued west from Arkansas to the great state of California, the Golden State.

California is a state that is golden in many ways- it bears an outsize influence on the culture of the US and the world in general. There is so much to learn and admire about this state and its people. We read three books about different aspects of California history and life. The Camping Trip that Changed America: Theodore Roosevelt, John Muir, and Our National Parks by Barb Rosenstock is an interesting slice of history and a tale of how a leader's vision helped to put laws in place to conserve some of our outstanding natural resources in the form of national parks. Levi Strauss Gets a Bright Idea: A Fairly Fabricated Story of a Pair of Pants by Tony Johnston is a funny tale of how denim jeans came into vogue in the days of the California gold rush. In First Day in Grapes Book by L. King Pérez, the author tells a story about a migrant child who goes to a new school every few months as his family travels from place to place to pick different types of produce in California.

California food presents us with a number of choices. There is the famous San Fransisco sourdough bread, which is enjoying a trendy moment at this time but is more of a commitment than I wanted to make. The ever popular ranch dressing and green goddess dressing were both invented in California. Other choices were California club sandwiches and mission burritos. But my daughter suggested California rolls and that's what we went with.

California rolls are a type of sushi, non-traditional but highly popular. They are characterized by being rolled inside out, with rice on the outside and the seaweed sheet inside. Usually they contain crab or imitation crab, but we followed this recipe for a vegan California roll. The other Cali-special ingredient in this roll is avocado.

The first order of business was to go to the local Asian store and buy some sushi rice (grown in California!) and roasted nori (seaweed) sheets. I already had seasoned rice wine vinegar at home. To serve with the sushi, I also bought a small tub of sweet pink pickled ginger.

The vegan "crab" mixture calls for chickpeas, cabbage, carrot, etc. with a dash of cashew paste for creaminess. As odd as it might sound, it tasted really great. 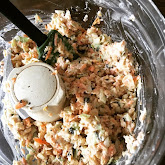 I made a cup of sushi rice in the instant pot. Then we laid out the "crab" filling, and thin slices of cucumber and avocado. We had fun rolling the inside-out California rolls with the help of a bamboo sushi mat, although they turned out far from perfect in our inexpert hands. Still very tasty, though! For a change, we also made some "regular" rolls using the same ingredients. Funny enough, the rice-out rolls tasted better to me. With the leftover ingredients, I made some sushi bowls the following day, also good to eat and very easy to put together!

It was fun to try something new, and I was gratified that it turned out tasty at the first try. Now I have 5 pound of sushi rice and will have to make these frequently over the next few months. This is good timing, as sushi rolls are a refreshing and light choice during the summer months.

From California, we flew to Colorado, the Centennial State. We read two fascinating books about the history of the region- Down the Colorado: John Wesley Powell, the One-Armed Explorer by Deborah Kogan Ray, and The Ancient Cliff Dwellers of Mesa Verde by Caroline Arnold. We had the opportunity to visit Colorado for a cousin's wedding a few years ago, and it is such a spectacular place.

For Colorado we considered making a Denver omelet, which is a thick and sturdy American-style omelet (almost a frittata) with onions, peppers and ham. Another choice was to make a batch of trail mix, because I strongly associate Colorado with hiking, climbing and other outdoor adventures fueled by a baggie of trail mix.

It turns out that Hot Pockets, the frozen microwaveable snacks, were invented by a pair of immigrant brothers in Denver, CO, in the 70s. I've never actually bought or tasted Hot Pockets but this factoid reminded me of the comedian Jim Gaffigan's bit on Hot Pockets, parodying their ridiculous ad jingle. We decided to make our own Hot Pockets for this state's food.

I found this knock-off recipe, which calls for a quick dough that is somewhat like pie crust. Normally, I would use puff pastry dough or something as a short-cut for pastries of this sort, but this dough came together in just a few minutes. I simply used a bowl, not a stand mixer. I stuck the dough in the fridge while I made the filling- mushrooms sautéed with some onions and garlic, with a bit of tomato sauce and Italian seasoning.

When we were ready to make the Hot Pockets, I rolled out the dough, sliced it into 8 portions, added some filling + mozzarella cheese to each pastry sheet, then folded and crimped them. The resulting mushroom Hot Pockets were absolutely delicious! The crust was tasty and it would be perfect for samosas.

My TV watching time is severely limited these days. I just go to bed as soon as the kids go to bed, and sometimes even before they go to bed! But here are a few good shows from recent months.

Looking around for some light reading, I checked out Tina Fey's memoir, Bossypants, a book that has been on my to-read list for many years. I love Tina Fey's sardonic brand of humor and her work on SNL, and this book was really fun to read. I particularly enjoyed the behind the scenes chatter about 30 Rock and have now started watching 30 Rock on Prime streaming. A great escapist sitcom.

During dinner every evening, we have been watching a couple of episodes of Jeopardy! on Netflix. My husband and I are both trivia buffs. Alex Trebek hosted this show for decades; he passed away a few months ago. I happened to find Trebek's memoirs The Answer Is . . .: Reflections on My Life in the new books section of the library (yes, the library is open again and it the biggest joy to be able to browse again) and it was a very quick and fun read. With little snippets and anecdotes, Trebek shares some moments from his life and from behind the scenes at Jeopardy!

Perhaps the most gripping show I watched recently is Challenger: The Final Flight, a four part documentary series on Netflix on the ill-fated space shuttle mission. The demands of managers and bureaucrats were prioritized over the concerns of engineers, with devastating results.

Wherever in the world you are, I hope you are safe and well. Please share snippets of your life- what are you eating? What are you watching?