Memorial Day- May 28 this year- is considered the official kick off to summer. Ours started memorably enough but not in a good way! We had the wettest May on record with 18 continuous days of rain. On May 28 at dawn, I awoke to a loud bang and in a half-asleep, dazed state, saw the ceiling fan going haywire with sparks flying out of it. No joke, and it was not a dream. It turns out that in the overnight storm, a large tree limb fell on our main power lines and sparked a dangerous electrical surge into our home.

The surge damaged our refrigerator, cooking range and microwave to the point of no repair. The refrigerator's water lines were damaged, causing the kitchen to flood, so the water mains had to be shut off. The surge caused the heating/cooling system to malfunction, and the power and internet cables had to be cut by the power company for safety reasons. In one fell swoop, we lost all the modern conveniences that we take for granted, during a holiday weekend. It took us almost 3 weeks to dig out of this mess. As expensive and aggravating as this month was, it could have been a lot worse and we are thankful that there was no fire and no one was harmed. 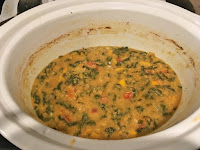 We were without a kitchen for several days. Friends came to the rescue in many ways. We were able to borrow fridge and freezer space from one friend to rescue some food. Others let us borrow a mini fridge, slow cooker and toaster oven so I had a makeshift kitchen until we were able to get new appliances installed. It was my first time using a slow cooker- I tried a few different things, including a tortellini (stuffed pasta) casserole, which turned out a bit mushy but edible, and rajma, which turned out a bit watery but also edible. The most successful was a simple red lentil dal with summer squash, Swiss chard and tomatoes.

Chantarelle mushrooms: The rain may have caused havoc in some cases (trees falling and all that) but it also caused a boom in chanterelle mushrooms. I wrote last year about foraging for chanterelles and this year this expert mushroom forager (and eater) Lila is at it again. We are enjoying them simply sautéed with garlic. 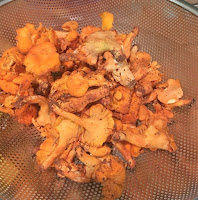 For a few weeks, lacking a functional kitchen, I gave my CSA vegetable boxes to friends. But here are some highlights from the veggies that I did end up using over the month.

Napa cabbage: For the first time, I bought some fresh Hong Kong style noodles from the Asian store. Not knowing any authentic way to cook these, I just pan-fried them, then topped them with roasted napa cabbage and mock chicken with a sweet and sour sauce. This impromptu dish was a hit. 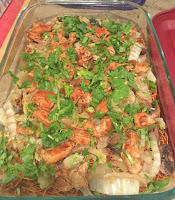 Green garlic: I remember my aunt buying green garlic (they look like green onions but with a distinct, delicate garlic aroma and flavor) when it was available seasonally, and very rarely, in Mumbai. She would cook it in into simple scrambled eggs and it was such a delicacy. I was excited to get green garlic in the veggie box and that's exactly how I cooked it- into scrambled eggs. 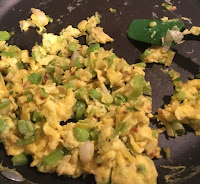 Tomatoes: For Father's day, we made a simple dinner of some of Daddy's favorite foods, including this deluxe bruschetta/caprese salad mash up with thin slices of baguette topped with tomato slices, mozzarella, fresh basil and chopped olives, all drizzled with garlic-infused olive oil and balsamic vinegar. 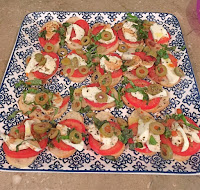 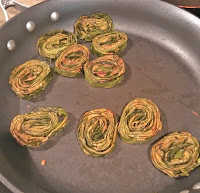 Shishito peppers: Last week we got some of these mild peppers in the box. I had never tasted them; V remembered eating them in a fancy restaurant a while ago. We cooked them in a searing hot cast iron pan and enjoyed them as in, with a yogurt dipping sauce. 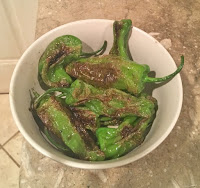 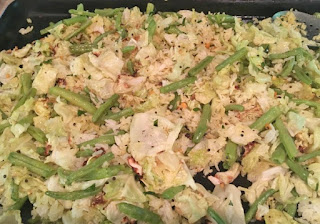 There was a bumper crop of cabbage and green beans in the CSA box last week and I inaugurated my new oven with this twist on a classic South Indian dish- lemon rice, a light, tangy dish just perfect for summer.

This version is a hybrid of lemon rice and cabbage rice. It fits in with the way I like to eat- with vegetables front and center, and the recipe makes a big batch.

1. Make rice in a rice cooker or stovetop and let it cool down. I used Jasmine rice because that's the staple in my kitchen, and this dish uses about 3/4 cup (1 rice cooker measure) raw rice.

2. Roast 1 baking sheet worth of vegetables at 400F until slightly charred at the edges and tender throughout. I used cabbage and green beans. Carrots, zucchini and summer squash would work well in this recipe, and steamed green peas or black eyed peas would be a nice addition.

3. Juice a couple of lemons and set the juice aside. In a pan, heat some oil. Temper with mustard seeds, chana dal, urad dal, asafetida, turmeric, fresh ginger and fresh curry leaves. Turn off the heat and stir in the lemon juice.

4. In a large mixing bowl, toss together the cooked rice, roasted veggies and spice-lemon mixture. Serve warm or at room temperature.

Appliances may have let me down last month, but books did not disappoint. Oh, it was a glorious reading month.

For the Read Harder Task #5: A book set in or about one of the five BRICS countries, I read The Widows of Malabar Hill by Sujata Massey. BRICS is the acronym for an association of five major emerging national economies: Brazil, Russia, India, China and South Africa and of these countries, I chose a book based not only in India, the land of my birth, but set in Malabar Hill, a neighborhood in South Bombay only a mile or two away from the place where I was born.

This book is a historical mystery based in 1920s Bombay but so many of the neighborhoods, landmarks, bakeries and foods mentioned brought back my own memories from the Bombay of the 80s and 90s. I will refer you to Niranjana's excellent review of the Widows of Malabar Hill and add only that if you are looking for a solid summer read, this one is worth picking up.

For the Read Harder Task #6:A book about nature, I read Astrophysics for People in a Hurry by Neil deGrasse Tyson. Astrophysics- the science of nature at its biggest and most expansive. The book starts off with this quote:

"The Universe is under no obligation to make sense to you."
- Neil deGrasse Tyson

But after declaring this, Tyson takes on the personal responsibility of helping ordinary mortals make sense of the universe. This slender volume features 12 essays, each of them highlighting some delicious feature of astrophysics. It is only June, but I am pretty sure this is going to be my favorite book of the year.


For the Read Harder Task #14: A book of social science, I picked up Life Reimagined: The Science, Art, and Opportunity of Midlife by Barbara Bradley Hagerty. The author is an NPR reporter (religion beat) who interviews dozens of people going through midlife, and talks to many social scientists researching aspects of midlife, plus there is a memoir theme running through this book.

For all those who like me are staring midlife in the face (!!), some takeaways from the book.

Three themes to living richly in midlife:
1. Engage with verve.
2. Choose purpose over happiness- the concept of eudaimonia (flourishing).
3. Your thinking is your experience.

Two of the many suggestions from the author:
Aim for meaning and not happiness, and you will find both.
At every stage in life, you should be a rookie at something.


They say not to judge a book by its cover, but sometimes I do just that- browsing in the library looking for covers that look interesting. That's how I picked up this book in the children's section. Frenemies in the Family: Famous Brothers and Sisters Who Butted Heads and Had Each Other's Backs by Kathleen Krull. This book is informative and delightful and very funny, a gossipy series of essays on famous sibling sets. It covers everyone from royalty, presidents, sports figures right down to the Gosselins.

How was your month of June? Hopefully not as eventful as mine ;)
Posted by Nupur at 7:12 PM 29 comments: