A little cubby in my galley kitchen is dubbed the snack corner. It is home to a couple of bags of tortilla chips and potato chips, bananas and ripening cantaloupe melons, the occasional box of cookies (often triple ginger cookies from Trader Joe's or good old Parle-G) and boxes of homemade snacks. This way, people who complain that they are hungry an hour before dinner, friends and neighbors who drop in all have something to nosh on. During the holiday season, the snack corner is better stocked than usual and today it is almost crowded, because I spent the morning making two sweets and one savory snack.

Recipe #16 is Butterscotch Candy. I saw the recipe only 2 days ago on Pinch My Salt and jumped up and down when I did. A year or two ago, I bought a bag of butterscotch morsels for some recipe that I never made and have now forgotten. Since then, every time I spotted the bag of butterscotch morsels (which are some highly artificial too-sweet concoction), I regretted that impulse buy. This recipe seemed to be a sign from the universe that I should use up the butterscotch chips and make something guilty-but-yummy, which is OK during the holidays, in my book.

It is a super-simple 3-ingredient recipe that I followed word for word. You melt the butterscotch chips, stir in corn flakes and roasted peanuts and scoop mounds of the stuff and let it solidify. Even a 5-year old could do it. And in fact, 5-year olds should do it, because this recipe has exactly the kind of sticky, messy, happy feel to it that they would love. 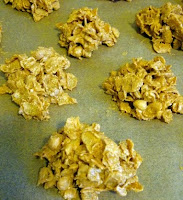 In spite of myself, I'll go ahead and admit that this candy is a delicious sugar rush. As I'm typing this, I can spot V sneaking past me to get one more of these from the snack corner.

Recipe #15 is Flourless Pistachio Cookies that I spotted on Kalyn's Kitchen two weeks ago. I have a strong affinity for recipes with really short ingredient lists, and this one is a winner with only 4 ingredients (almond meal, pistachios, sugar, eggs). I followed the recipe closely, making only two modifications. I used sugar instead of Splenda but reduced the quantity to ¾ cup, and added a splash of vanilla extract to the batter. The whole thing gets put together in 5 minutes in the food processor. 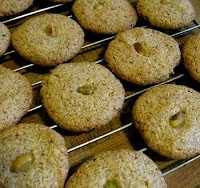 The cookies were nutty and delicious! I made platters of the candy, cookies and slices of fruitcake (yes, I made it and it turned out great but that's a story for another post) for my neighbors.

I desperately needed something salty to counter all of that sweetness and decided to try the chivda from Vadani Kaval Gheta.  Now I have my own standard bare-bones recipe for chivda that I've posted before, 4 years ago (!!). I think of the recipe from Mints! as my chivda 2.0 because it has all the fixings like puffed chana dal, poppy seeds, sesame seeds, coriander and cumin powder that really make the chivda authentic.

I followed her recipe closely with a few tweaks. I mixed 3 cups Rice Krispies cereal and 5 cups thin poha and spread them in a sheet pan and roasted them in the oven at 275F for 15-20 minutes to get them crispy (instead of the microwave method used in the original recipe). I added some cranberries to give the chivda a festive seasonal touch; the tartness is also wonderful. 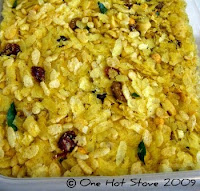 Enjoy your weekend; I need to log off and cook some more- hungry friends are due to show up for dinner!
Posted by Nupur at 5:09 PM