A Cupcake Cake, and other Summer Treats

Summer 2022 is going by in the blink of an eye. I don't have a recipe today, just a few pics and notes about things I've made recently.

1. First up, our little boy turned 6 this month and we celebrated outside at a local park with a few of his little friends. This park has a splash pad as well as a playground, and the kids had a blast running around and eating cupcakes, sandwiches, watermelon and chips.

The birthday boy loves ice cream cones so I made a cupcake cake shaped like an ice cream cone. The idea came from (where else but) pics I've seen online. The cupcakes were a double batch of this funfetti cupcakes recipe, made the night before, with the "cone" cupcakes in cocoa frosting and the "ice cream" cupcakes in strawberry cream cheese frosting, with Mike and Ike candies as sprinkles. The "cherry" cupcake was dipped in red sanding sugar. 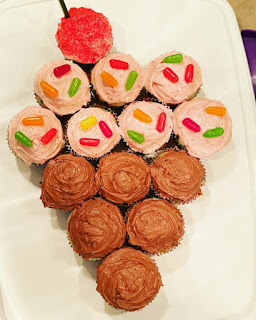 2. A staple of summer is summer rolls. They are refreshing, colorful, and wholesome, a mini hand-held salad, if you will. We made this batch for a small gathering. I prepped everything and then my daughter made the rolls. Yes, it is nice to have a sous chef around. They are fun to make and absolutely delicious to eat. While the weather is hot, I hope to make these a couple more times for a light meal. 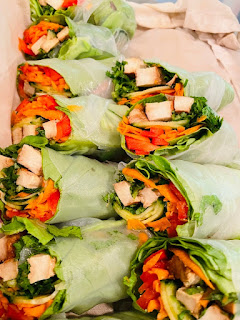 3. Next up, we've been making chutney sandwiches. I always think of them as "Bombay sandwiches" because they're sold as street food in Mumbai. Waaay back in 2005, I wrote about these on a post about the green chutney spread that makes these sandwiches so tasty and special. Recently, I've discovered that Trader Joe's sells Yemeni zhoug sauce that's so very close to the hiravi chutney. When I buy that tub of sauce, sandwich making is just a matter of slicing veggies and assembling everything. 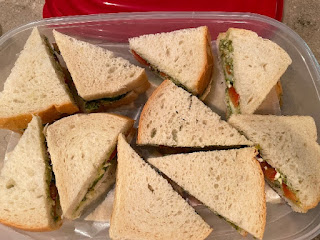 4. Eggplant is my favorite vegetable, and when eggplants are in season in summer, it is time to try all those bookmarked eggplant recipes. This stuffed eggplant parm was one I got around to trying and it was delicious. However, the effort it took to scoop out the eggplant halves, and the way the eggplant shells did not bake evenly means that I am unlikely to make this again. 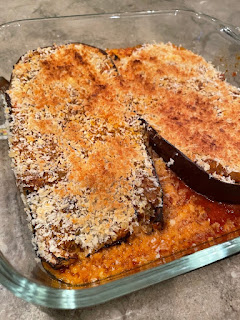 5. Pickles! My daughter adores pickles and eats ungodly amounts of them. We always tell her about her unusual daily breakfast when she was just 2 years old- a fried egg and a pickled okra! This time, we tried making these refrigerator dill pickles and they were so easy to make, and turned out perfect. The only problem is pickling cucumbers are not easy to find. 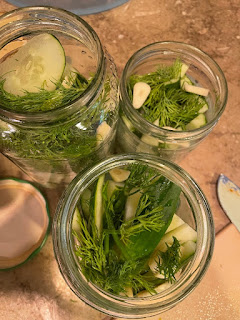 6. For a recent brunch with friends, I decided to try making a pan of cinnamon rolls. I used this recipe but the way I rolled and cut the dough yielded about 16 medium rolls rather than the 24 mini rolls I was going for. But they were delicious! I made an icing drizzle rather than the cream cheese frosting. 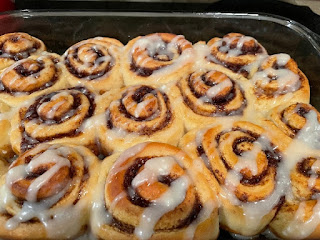 7. Last on the list, a sewing project. I made a set of quilted coasters with some of my favorite Indian block prints. They are easy and fun to make- pattern here.

Other than these little kitchen projects and craft projects, summer has been full of work, driving kids to and from various camps (botanical garden camp, interior design camp, barn sanctuary camp, gymnastics camp...), a little outdoor swimming, some reading, some spring cleaning...and before we know it, the new school year is almost here.
How is your summer going?
Posted by Nupur at 6:22 PM 8 comments: