Wrapping up 2018, and a recipe for Sugar Plums

The blog has been silent but the One Hot Stove kitchen has been working overtime in the last two months. Read on to see some of the things I've been cooking and baking.

Birthday cakes: I've made 3 birthday cakes over the last two months, two for my work family and one for my darling spouse.

For V's birthday, I made him one of his favorite cakes- the tres leches or three milks cake. I used this recipe which is written for the vitamix. It takes the hard work out of whipping eggs by having you make the cake batter in a couple of minutes in the blender. The three milks I used to soak the cake were condensed milk, evaporated milk and coconut milk. For the topping, I whipped a cup of heavy cream by hand, and topped the whole confection with fresh blueberries and canned mandarin oranges just before serving. V shared it with his colleagues at work and I swear it served about 20 people. It is a rich cake and the pudding texture makes it a decadent crowd-pleaser. 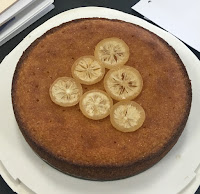 Several people in my work family have gluten allergies so when I volunteered to make a birthday cake for one of them, I chose this recipe for gluten free sticky lemon cake. It sounded light and tasty and just the right thing to serve at a celebratory coffee break. The only special ingredient needed was polenta (the raw kind, not the cooked polenta in tubes); I checked a few stores and couldn't find this. In the end, I used a 50-50 mix of fine cornmeal and corn grits. As the birthday girl was poised with the knife, with everyone gathered around poised with their forks, I started to think that this was going to be real embarrassing if this recipe didn't come out right. Luckily it did and the cake was soft and tasty. I do think the corn grits were a bit too gritty though (yes I know that's why they call them grits) so the next time I make this, I will seek out proper polenta. 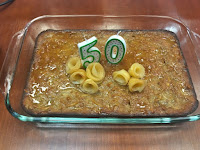 Buoyed by the success of my first gluten free cake, I stepped up to make the cake for another colleague and this was a bigger deal- a 50th birthday party. In conversations with her, it turned out that she is not a fan of the flourless chocolate cakes. They are the go-to choice for gluten free desserts but can be too rich and cloying beyond a bite or two. So I decided on this recipe for a gluten free apple and walnut cake. I simplified the recipe by baking the cake directly in a glass pan, not cutting it as directed, and simply drizzling the syrup on the whole cake. I used some cardamom in the syrup and all in all, it tasted like a baklava in cake form.

So now I have two stellar gluten free cakes in my baking repertoire and both of these are worth making again and again.

Diwali was a quiet affair at our home. Our grown niece visited with diyas, jalebis and chaklis. I made a dinner featuring saag paneer, and saffron kheer for dessert. The kids enjoyed whirling sparklers once it got dark outside. 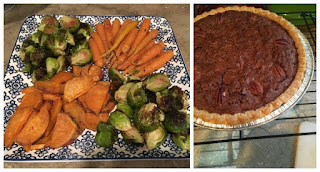 Thanksgiving: We hosted a small "friendsgiving" with 9 people at the table. The menu was pretty standard. The main dishes were a portobello wellington and a mock turkey roast from Trader Joe's. For sides, I made mashed potatoes, roasted vegetables, mushroom gravy, cranberry sauce and green bean casserole. Desserts were the chocolate pecan pie that I make year after year, and sweet potato brownies and assorted cheesecake slices brought by our friends.

For the holiday brunch potluck at work, I made this hash brown breakfast bake. My only modification was to use 6 eggs instead of 5 and to use less cheese than directed. Using frozen hash brown patties and pantry ingredients, it was a breeze to assemble it the night before and bake it off before work. In fact, I'm making another one of these for a new year's eve brunch as we speak. 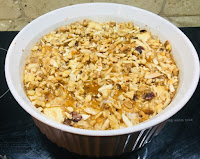 For yet another holiday breakfast get-together, I tried an apple oatmeal bake. I used a mixture of dairy and almond milk. This was also assembled the evening before and baked off the next morning. It was warm, hearty and not too sweet, with perfect winter flavors. We ate leftovers warmed up in the microwave for the next day or two.

Gifts from the kitchen: We don't have massive Christmas commitments and don't exchange gifts with family over the holidays (although we do get some small things for the kids) so I am free to focus on the teachers, mail carrier, garbage and recycling truck drivers, bus driver, co-workers and all of these wonderful people who make our life easier all year round. Some got gift cards, a couple got handmade scarves, some got store-bought goodies like giant popcorn tins and boxes of Walker's shortbread. I also made several batches of almond biscotti and buttercrunch candy to give as gifts. 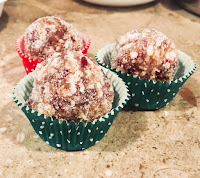 My favorite homemade gift this year was also the simplest one. We had a great month at ballet class and my ballet teacher played lots of fun holiday music all December, including pieces from The Nutcracker- my favorite being the Dance of the Sugar Plum Fairy. I thought it might amuse my ballet teacher if I gave her a box of sugar plums. Sugar plums are a classic holiday candy, but when I checked online, there are all sorts of versions of what these really are.

I decided I would make my own version, by essentially making no-bake fruit and nut treats and rolling them in sugar. Incidentally the (standard, cheap) granulated sugar I bought from Target sparkled very prettily and made it look very festive. I don't think the photos show that so you'll have to take my word for it.

(My version of) Sugar Plums

Pulse all ingredients in a food processor until you get a finely chopped mixture.
Form the mixture into balls.
Roll in granulated sugar and place in mini muffin cups.
Store in fridge.
This recipe makes about 15 sugar plums. 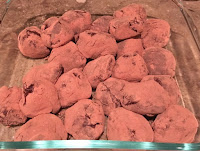 Instant Hot Chocolate: Here's a new recipe I tried that came through in taste but not so much in looks- see exhibit A to the left. They are cocoa blocks, designed to be mixed with hot milk to make instant hot chocolate. The recipe was easy enough but even after several hours in the fridge, I couldn't slice it into neat bars, ending up with knobbly truffles instead. Having said that, these are terrific to keep in the fridge to make hot chocolate on demand. That part of the recipe works as advertised!

A new favorite cookbook: I'm friends with the children's librarian at our public library. He is an ardent Indophile and we enjoy chatting about Indian traditions, languages and of course, Indian food. He told me that his all-time favorite Indian cookbook is Vegan Richa's Indian Kitchen. The name rang a bell for me; Richa has been blogging for a long time. But I hadn't read her cookbook. Mr E immediately obtained the book for me and I can see why he loves this book so much. I immediately flagged over a dozen recipes to try.

The first recipe I tried was for oats poha. It is one I've seen popping up on Indian blogs for several years, but had never quite mustered up the enthusiasm to try a savory oats recipe before. It turned out pretty tasty. But I think I still prefer oats in oatmeal and poha in poha!

Here's one I tried on Christmas Day, in a nod to our "Chinese food on Christmas Day" tradition of sorts. It is the well-loved gobi manchurian, only baked and not fried. Cauliflower florets are dipped in a marinade and baked, and meanwhile, a tasty sauce is made on the stovetop. We loved this and will be making it often. I will have to tweak the recipe a little bit to make the baked cauliflower more crispy but the favors are spot on.

The curry recipes in this books are very tempting. For years, I have been trying to get myself to like tempeh. It is a cultured soy product, high in protein and worth including in a vegetarian diet. But the taste and texture can take some getting used to. Enter Richa, with a great tip for boiling the tempeh in seasoned water before adding it to the curry. It worked! I used the tempeh in the do pyaaza (onion) curry and for the first time ever, I loved tempeh.

Finally, here are a few pictures from the holiday market at Lila's school. This is an after-school event- they set up a few tables in the hallways and let students and parents sell holiday treats, crafts, ornaments, bath and body stuff and things of that sort. It is a really fun and festive event and allows the kids to be little entrepreneurs for an afternoon. Lila (age 7) was really excited to participate. We made 4 items to sell: melted snowman cookies, gift tags (a recycled craft made with pictures cut out of the uber-cute King Arthur flour holiday catalog!), elves made from wine corks (not pictured) and red and green hair bows sewed from fabric scraps.

The melted snowman cookies were NOT a marvel of baking but they did look quite cute. In a last minute scramble, I simply bought a tray of plain sugar cookies at the supermarket. We made icing by mixing powdered sugar with a few teaspoons of milk. A puddle of icing on the cookie, a large marshmallow as the head, two pretzel sticks as the arms, m&m candy as buttons, and colored icing used to draw faces on. The icing hardens in a couple of hours. And, you guessed it, the snowman cookies were the biggest hit. We made a grand profit of $18 from the whole enterprise. The clever kid who made buckets of slime probably made hundreds! 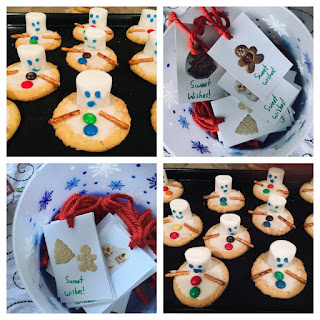 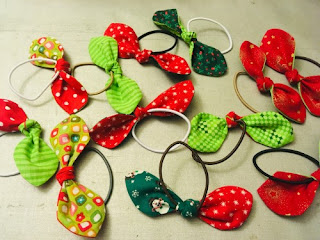 2018 was a good year for books- and in no small part due to the Read Harder 2018 challenge. I picked up so many unexpected books thanks to this challenge, and although I came late to the party (starting only in July), I finished the last of the 24 tasks last week. The list of books I read for all 24 tasks is here.

The Read Harder 2019 challenge has been posted and I already have books picked out for a few of the tasks. Would anyone like to join me in doing this reading challenge in 2019?

Here are a few recommendations from my past reading for some of the tasks. I'll be looking for new books to fit these tasks, of course.

1. An epistolary novel or collection of letters
84, Charing Cross Road by Helene Hanff,
The Guernsey Literary and Potato Peel Pie Society by Mary Ann Shaffer
The Diary of a Young Girl by Anne Frank

2. An alternate history novel
11/22/63 by Stephen King about the Kennedy assassination being thwarted and world events following that.

4. A humor book
The Hitchhiker's Guide to the Galaxy by Douglas Adams
PG Wodehouse has many classics!

5. A book by a journalist or about journalism
Into Thin Air by Jon Krakauer
In Cold Blood by Truman Capote

6. A book by an AOC set in or about space
Books by Neil Degrasse Tyson would fit this task

13. A book by or about someone that identifies as neurodiverse
Books by Oliver Sacks would fit this task

14. A cozy mystery
The Miss Marple Series by Agatha Christie, of course. But my personal favorite is the The No. 1 Ladies' Detective Agency series by Alexander McCall Smith.

2019 holds a milestone birthday for me, and I hope it brings peace and joy for us all. Happy new year, friends!
Posted by Nupur at 8:47 AM 20 comments: