On Monday nights, I often watch a TV show that fills me with shock and horror but compels me to keep watching (not you, Khloe Kardashian), it is called Hoarders. Compulsive hoarding is a serious issue for some people and this show is as real as it gets.

It so happens that my own tendencies lean to the opposite of hoarding; I tend to throw out stuff ruthlessly and don't really have a sentimental attachment to anything. V always jokes that one of these days I'm going to decide that he and the dog are just cluttering up the place and donate them both to the nearest thrift store! But this show is making me even less tolerant of "stuff" than I ever was. If you need an incentive to clean out your own clutter, you must watch Hoarders.

After this Monday's episode, the ripe bananas I had been saving in the freezer HAD TO GO. Predictably enough, I made banana bread from a recipe I've used once before, so it is not new to me, but I haven't posted it before, so I'll include it in my 40 recipes project anyway.

Recipe #30 is Chocolate Banana Bread adapted from this recipe.

I made only some minor changes:
1. I reduced the amount of sugar to ¼ cup because the overripe bananas are sweet enough.
2. I used some almond flour and whole wheat pastry flour to replace some of the all-purpose flour.
3. I used walnuts in place of pecans. 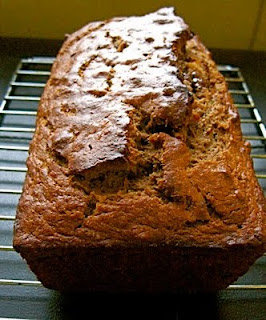 This bread is wonderful- chocolatey without being overwhelmingly so, and it makes for a great mid-morning or mid-afternoon snack. This recipe is definitely a keeper.