What I eat for breakfast every single day

Before I launch into the post: Did you notice a change on the blog? After years and years of keeping the same blog header, I was ready for a change and tinkered around and made a new one, just for fun. It looks a little blurry and I still need to figure out how to fix that.

Today I'm writing a quick post about breakfast, which remains an important meal for my early-bird self. Two years ago, I went on a work trip and discovered the hearty simplicity of steel-cut oats. Back home, I quickly got into the groove of cooking 1 cup of dry steel-cut oats and eating that batch over 4 days. Rinse and repeat. Having discovered an easy and tasty topping for the plain porridge, I found myself eating it every day. I waited to tire of it, but almost 2 years have passed and I still look forward to that hearty bowl of oatmeal, no matter the season.

My husband has eaten granola for breakfast for about 15 years and counting. I always wondered how he did not tire of eating the exact same thing every day and now here I am, eating the same meal every morning. There's something to be said for it. I spent so much time planning, shopping for, and cooking meals, trying to keep the menu somewhat varied and interesting, that it is a relief to have one meal that is sorted out every day. Just a little less decision-making in a day filled with thousands of choices and decisions, minor as they may be.

(About 4 servings)
1 cup dry steel-cut oats
4 cups water
1/4  tsp. salt
I usually add 3/4 cup or so of almond milk to the oats after cooking, for some creaminess.
On days 2, 3 and 4, when I am eating refrigerated oatmeal, I simply scoop some in a bowl, add some water if needed, and microwave for a couple of minutes until it is piping hot. 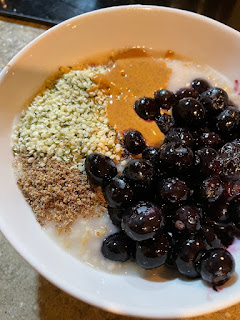 To my bowl of warm oatmeal, I typically add:
1. 3/4 cup of frozen blueberries, thawed in the microwave for a minute
2. A spoonful of hemp seeds
3. A spoonful of ground flax seeds
4. A serving of mixed nut butter
On alternate days, I add 1 or 2 chopped Brazil nuts for the selenium.
So that is it- my low effort breakfast!

Do you or would you eat the same thing every day for a meal?

Classic flan in the Instant Pot

While I don't have much of a sweet tooth, there are some desserts that I am very fond of. Near the top of that list is flan, or as I grew up knowing it, caramel pudding. A simple and comforting confection of eggs, milk and sugar, it was the first dessert I really learned to make- in the pressure cooker, in those stainless steel inserts- and also one of the first posts I wrote back in the spring of 2005.

My pressure cooker was small, so I was making caramel custard in the oven, using a bain marie (water bath). The same method went into making a pumpkin flan that featured on our Thanksgiving table some years later. However, bain maries are a bit tedious and I never really felt like I had a standardized flan recipe. By standardized, I mean a solid recipe that works in my hands, with tools that I own and familiar ingredients, and quantities that fit in my pots and pans, and with great results.

Finally, I have landed on a flan recipe that checks all the boxes. I made it this weekend for dinner guests and it is "the one". For one thing, it is made in the Instant Pot so there is no fussing with the oven or a bain marie. The flan mixture exactly fills my 7-cup Pyrex bowl which in turn exactly fits in the Instant Pot. The resulting flan has the perfect, smooth texture and serves 10-12, enough for a dinner gathering of two families, with a bit left over for the next day.

Making caramel is probably the hardest part of this recipe, which is good news because caramel is not hard to make at all. It can be done in the oven, stovetop or microwave and having tried them all at different times, I am firmly in the stovetop camp.

While flan is definitely a rich dessert and an occasional, special, treat, it is far from being cloyingly sweet. I don't use a whole can of condensed milk, saving a portion of it in a glass jar in the fridge. We can use it for another dessert later this month.

(recipe adapted from this video) 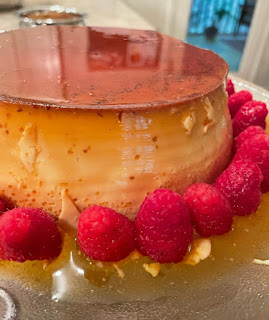 1. Set out whole milk, cream cheese and eggs out to come to room temperature (check quantities below).

2. Make the caramel. In a small saucepan, mix 1/2 cup regular sugar and 3 tbsp. water. Heat on medium heat until sugar melts, bubbles and caramelizes into a deep golden color. Watch the pot carefully because caramel can burn quickly. Pour the caramel into an ungreased 7 cup round bowl and let it cool for a few minutes.

3. In a blender, blend the following to a smooth mixture-

4. Pour the flan mixture into the bowl that has cooled caramel. Cover the bowl tightly with foil.
5. Place 2 cups water into the Instant Pot insert. The bowl goes onto a trivet and into the Instant Pot. Pressure cook on high for 30 minutes. Let the pressure release naturally.
6. Pull out the flan from the Instant Pot. Let it sit out for 15 minutes to cool slightly, then refrigerate for several hours to chill thoroughly before serving.
7. Run a knife around the edge of the flan to loosen it, then turn into a platter to catch the lovely caramel sauce. 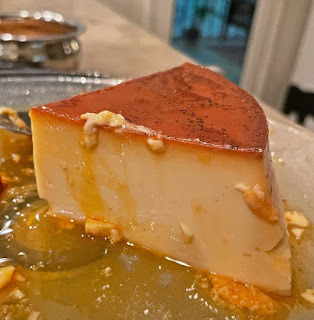 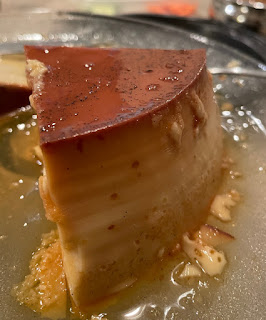 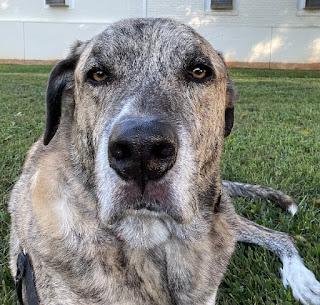