Lava Toffee, and the CSA begins

Puttering in the kitchen with kids is always messy and fun, especially when it results in some funky looking candy. A few months ago, Lila went to a one-day science camp. Her favorite activity of the day was the making of a candy called lava toffee. When I went to pick her up in the late afternoon, she was waiting not-so-patiently to taste the confection. Unfortunately something had gone wrong with the recipe (they likely did not heat it to a high enough temp)- the candy failed to set and the campers did not get a taste. Little miss was crushed and only settled down when I promised her we would make it at home "one day". That day came during Spring Break week in mid-March. 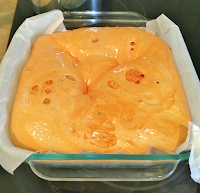 You know the quick and dirty volcano you can make with just vinegar and baking soda? This candy works on a similar principle, only using heat instead of acid to release carbon dioxide from the baking soda. You cook a sugar syrup to the hard crack stage; this is the temperature (300F) which gives a hard, crunchy texture upon cooling. Then add baking soda to the sugar syrup. The heat decomposes the baking soda (sodium bicarbonate) to sodium carbonate, water and carbon dioxide. The bubbles of carbon dioxide make the sugar syrup foam with a dramatic lava effect and the candy cools into a beautiful honeycomb candy. Lila is too young to understand or care about the science of lava toffee; all she wanted to do was eat it, but older kids might appreciate it as a tasty science experiment for a school science fair!

I used this recipe- it needs only a few pantry ingredients and a candy thermometer. The recipe worked like a charm, foaming dramatically and then cooling quickly into this light, spongy, crunchy candy. A cup of sugar makes a very generous 8 inch x 8 inch pan of candy. The only thing to watch out for is that the candy burns quickly: take the syrup off the heat the instant it gets to 300F. Our candy ended up having a bit of a burnt after-taste because I let it linger at 300F for a few seconds. Next time I will skip the honey, which probably also contributed to the burnt taste. 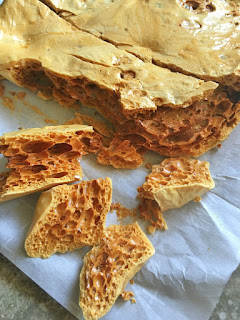 A couple of years ago, we enjoyed a weekly local vegetable box delivery (community-supported agriculture or CSA), as seen in these posts. Then we were busy with other things and I did not renew the subscription. I just got around to signing up again for a CSA for 16 weeks.

The first box contained:
1. Strawberries- Washed and eaten in 5 minutes flat.
2. Carrots- Tender spring carrots are best enjoyed as a snack and that's what we did.
3. Radishes- Radishes, radish greens and carrot greens all went into a radish sambar.
4. Beets- Beet thoran as an accompaniment to khichdi.
5. Parsley- Made into a simple and wonderful dressing in the high-powered blender with tahini, lemon juice, salt, pepper and some water.
6. Arugula- Potato arugula frittata; took this to a friend's house as our contribution to the meal.
7. Scallions- Tofu stir fry.
8. Baby greens- A few different salads.

You can't eat any more locally than this! These collard greens came from the vegetable garden in Lila's school- proudly planted and tended and lovingly harvested by the kindergarteners. Lila came home with a bag of shredded kale and recited a recipe- to cook it with sea salt, vinegar and honey.


* * *
Fitness Update: I wrote a couple of months ago about signing up for a weightlifting class called BodyPump. So far, so good. I have been going religiously 3 days a week for the last 12 weeks. The biggest difference I see with regular exercise is that it brightens my mood. I do feel stronger but there are no magical before-after pictures like you see in the ads- building muscle is not something that happens overnight and it is going to take a lot longer than a few months. I am excited to keep doing this.

When I schedule exercise formally by writing it in my calendar, I can stick to it. Once in my calendar, the fitness class is on par with other things that I don't blow off on a whim- like conference calls and parent teacher conferences.  The plan to start running again has not materialized because I have vague desires to run but never put in on my calendar, but I hope to add in some running or swimming into the exercise rotation in the coming weeks.

How has March/April been for you? Tell me everything!
Posted by Nupur at 7:19 PM 20 comments: