Day 3 of the recipe marathon is a mixed bag but quite heavy on Indian fare.

Let's start with a choice of two tasty appetizers- zucchini fritters and quinoa hash browns, and then a sweet potato-saffron protein shake to fortify us, and we're ready for a journey through India.

Once we arrive in the subcontinent, there are a couple more appetizers waiting for us- raw banana patties and baked masala vadai. Then, in Southern India, try some vegetable sukke from the Konkan coast, eggplants in a spicy peanut gravy from Andhra Pradesh, curry leaves kuzhambu from Tamil Nadu, majjige huli from Karnataka, Bittergourd in spicy Kolhapuri gravy from Maharashtra and lemon rice, popular all over Southern India.

Then we travel North to Punjab for a taste of dal makhani. Indian cuisines use rice in innovative ways, and here we have four recipes to showcase rice: methi corn pulav, methi pulao, egg biryani and nargisi biryani. Finally, a bread recipe gets an Indian touch with spices.

Back from India, the festive spirit is still in the air and we have a dessert table loaded with mexican cookies, pear and blue cheese crostata, lemony raspberry muffins and a gingerbread house.

I took a trip to Punjab too, by attempting to make Recipe #6: Makai ki roti (corn flatbread), inspired by this recipe.

Only, my roti had a bit of an identity crisis- it was made with masa harina instead of makai atta (regular corn flour) and using a tortilla press (exactly like this one) instead of being rolled out. So the only reason it is a mooli roti and not a tortilla is because of the radish and the spices, I guess.

Several months ago, I found a new heavy-duty tortilla press on Craigslist and uncharacteristically for me, bought it on a whim and stuck it in a kitchen cabinet. For the sake of the tortilla press, so it would have something to press, I bought a bag of masa harina and stuck that in the freezer. You see where this is going. Today, both were put to good use for the first time.

The dough was simple: masa harina, grated diakon radish, red chilli powder, cumin and coriander powder and salt, mixed into a soft pliable dough with hot water and pressed into shape with the tortilla press, then cooked in a cast iron pan.

For my first attempt, the rotis turned out fairly good! They are perfect winter fare. We enjoyed them with boondi raita. 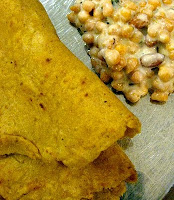 I know people use roti presses that are very similar (or the same?) to tortilla presses. Does anyone use those and are they any good for making regular rotis with wheat atta? Thanks for your input.

The marathon continues tomorrow- stay tuned! All the participants are coming up with fantastic recipes and making this so much fun for me.
Posted by Nupur at 8:28 PM