Catching up on the United Tastes series

In earlier posts this year, I shared about the United Tastes project that my daughter and I are working on, reading and cooking our way alphabetically through the 50 States, starting with the four A states and California and Colorado. Here are the others that we have toured since...

#7 Connecticut: Every now and then, my daughter will ask me to take her to Subway (the sandwich chain) for a lunch treat; it is our little mom and daughter tradition a few times a year. (My husband refuses to step foot into this particular chain restaurant.) It turns out that Subway started in Bridgeport, Connecticut when a student started selling sub sandwiches to earn money for college. So for the state food, we made our own Subway sandwiches.

I always get the veggie patty sandwich at Subway and that's what I wanted to recreate. The Morningstar garden veggie burger sold in the supermarket frozen section comes very close to the veggie patty that Subway sells. On a toasted sub-sandwich bun, we layered a bit of cheese and the veggie burger, followed by lettuce, tomatoes, onions and picked jalapeños. Finally, I made a knock-off southwest chipotle sauce based on this recipe by mixing a few ingredients that I had on hand- like mayo, yogurt, ranch dressing powder, white vinegar, chipotles in adobo, etc. and added it liberally, and the result was so tasty. We will be making this sandwich again and again.

#8 Delaware: The 8th state of our journey is famous for being the first state of the union. Here in Georgia we claim peaches as our own, but peaches were an important crop in Delaware in the 1830s way before they made their way south as the railroads were built. In fact the peach blossom remains the state flower of Delaware. So we made a snacking peach cobbler cake, with canned peaches, as fresh ones are not yet in season. The peach snack cake came along with us to a park picnic. 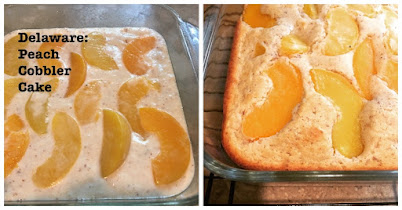 #9 Florida: Florida is our wild neighbor to the South and we have visited beaches on the Atlantic coast there. At some point, I suppose we will make a pilgrimage to Orlando and the theme parks, a mainstay of American childhood. We went all out on the food front and celebrated two iconic Floridian things- Cuban food and citrus. We made lime bars (with regular limes because key limes are hard to find!) using this recipe. I also made vegetarian Cuban sandwiches using Tofurkey vegan "ham", cheese, mustard and pickles, with the sandwich toasted by pressing on a griddle, and washed down the sandwich with a glass of OJ from FL. 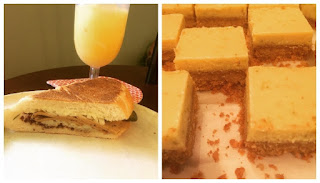 #10 Georgia: This is the state that we have called home for the last 8+ years. During this time we have come to embrace Southern Comfort and to love this state and its people. From mountains to beaches to forests and waterfalls, GA has loads of natural beauty and we love to get out there and fawn over it. As for food, we had endless choices. We eat Southern food all the time. Over here we just call it food! Peaches would have been the obvious choice for the Peach State but they’re not in season yet.

The universe made my decision easy when Vidalia onions arrived in my CSA share that week. Vidalia onions are sweet onions that are grown only in Georgia and they are the state vegetable. We made a beautiful Vidalia onion pie. (I should have served the Vidalia onion pie with some Diet Coke because, as you probably know, Coca Cola was invented in Atlanta). Georgia is also nicknamed the Goober state so we also enjoyed some boiled peanuts for snack. Peanuts came to North America with enslaved Africans and remain a very important cash crop in GA to this day. 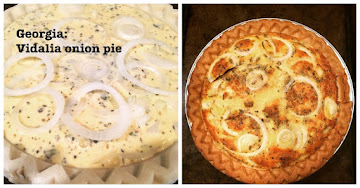 #11 Hawaii is a chain of volcanic islands floating away in the Pacific Ocean, far far away from pretty much anywhere. I mean, their state animal is the humpback whale!! Hawaii joined the US as the 50th state only very recently, in 1959. The word most associated with Hawaii- Aloha- is not Hawaiian slang for “hi”. It is a word with a spiritual meaning; the coordination of mind and spirit within each person. Hawaii is associated with macadamia nuts, sugarcane, pineapple. We made Dole whip, a pineapple soft serve dessert with frozen pineapple and juice and vanilla ice cream (which in my hands turned out softer than soft serve but was still praised by my two kids and a visiting neighbor kid). We also made classic Hawaiian comfort food called loco moco- rice topped with a burger, mushroom gravy and a fried egg.

#12 Idaho, the Potato State. Idaho is synonymous with potatoes so there was no doubt that this is the ingredient to showcase. Idaho was our state for Memorial Day weekend back in May, the unofficial start of summer. So we made a tub of potato salad with the works (Pickles! Onions! Chives! Celery!) and took it out to a state park for a picnic lunch. 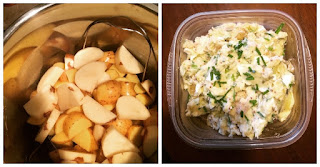 #13 Illinois! We lived in neighboring Missouri for many years and have visited Illinois several times- my experience can be summarized as lots of flat crop land after which you arrive in the glittering city of Chicago with its great restaurants and museums and the lakefront. We paid homage to Chicago by making deep dish pizza from scratch. It was a half day project and lots of fun- a buttery crust with some cornmeal for tenderness; cheese at the bottom and sauce on top (an upside down version of regular pizza) and baked in a deep cake pan for thick cake-style slices. It turned out fantastic! This was my favorite culinary experience of all the states we have covered so far and I highly recommend this recipe if you are looking for a cooking project. 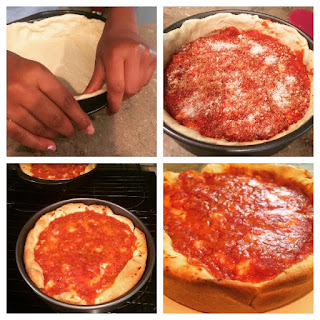 #14 Indiana: You know how we often rave about things being “the best thing since sliced bread”? Well, the OG sliced bread- the first pre-sliced bread that was commercially sold- was Wonder Bread from Indiana. The iconic wrapper of this bread was inspired by the colorful hot air balloons at the international balloon race on the Indy motorway. Wonder Bread celebrates its 100th anniversary this year so, well, we bought ourselves a loaf as the food of Indiana. Peanut butter and jelly sandwiches are THE food of American childhood. I made a back-of-the-envelope calculation that I have made over a thousand PB&Js since my kids were born and will probably make a couple thousand more before they grow up. So we used the Wonder Bread for a PB&J (this was my first and last time buying Wonder Bread; there is much better bread out there.) And for something extra, we made French toast roll-ups stuffed with peanut butter and jelly with the bread. 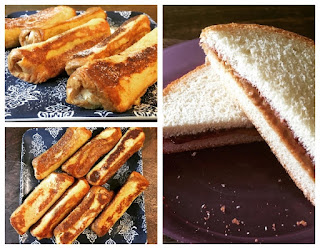 #15 Iowa. Iowa is a big corn producer and the Midwest does love its casseroles so we made a corn casserole as the state dish, using fresh sweet corn which is in season at this time. It was pretty good. A few interesting facts about Iowa: there are 7 pigs for every human in Iowa. Quaker Oats got its start in Iowa. The house shown in Grant Woods’s iconic 1930 painting American Gothic still stands in Eldon, Iowa. 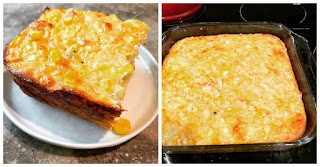 If you are on Instagram, I update the project here every week (or two or three; life has been busy lately); feel free to follow along if interested! You will also see pictures of the books we're reading for each state. The next state is Kansas, known to be the bread basket of America.

How is life going for you?