Why Do You Bake?

"Why do you bake"- This was the question posed to me by my high school friend's nine year old son. He was scarfing down brownies and lemon bars at my kitchen counter and had just informed me that I should open a bakery. Did I mention that he's a great kid? ;)

I bake because it is fun- like an experiment, and then you get to eat the results, is what I told him. Baking and cooking certainly is fun, but it is much more than that. It is a simple way to spread some cheer, contribute to the community, nourish relationships and share the love.

Recently, baking triggered a big wave of nostalgia. Over Memorial Day weekend, I hosted a mini reunion with two of my best high school buddies and their families. Some of our most vivid high school memories are of getting together in my parents' kitchen and baking a cake, specifically, a marble cake with swirls of vanilla and chocolate cake which was our family go-to cake recipe. It was a "true pound cake", as in, the recipe was similar to the original way pound cakes were made, using a pound each of flour, sugar, butter and eggs.

Baking certainly wasn't a traditional activity in Indian home kitchens at the time we were growing up. But my parents loved baking cakes now and then, using a big plug-in countertop oven which had been a wedding gift and an electric hand mixer which my grandparents brought back from a trip to Singapore.

I described the making of the cake in this blog post nearly a decade ago: "Equal weights of eggs, butter (usually home-churned), sugar (powdered in the mixie) and flour (sifted with baking powder) were set out. Ritually, butter and sugar were creamed together with some vanilla essence. Beaten eggs and flour were added in tandem, a little at a time, until a thick and creamy batter emerged. The batter would get divided into two parts. One part got tutti frutti and chopped walnuts stirred into it, and the other got a few spoonfuls of cocoa powder. The two batters were dropped in random clumps into a cake pan lined with newspaper, and after a hour of baking, a random marbled cake emerged, with swirls of pale yellow and dark brown. Occasionally, the birthday girl would request a more colorful cake, and then the batter would get divided into four, and two portions would get pink or green food coloring to result in a beautifully ribboned cake with swirls of pastel colors." 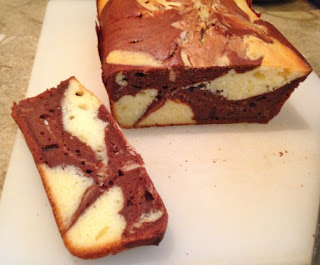 Well, this was the marble cake that we would make as teenagers. I use the term "we" loosely. The gal pals would sit around and yak steadily while I hustled to make the cake, then they gamely ate up half the batter in the name of tasting it even before it went into the oven. The resulting cake would be demolished in minutes in the way that only teenagers can devour food.

So when my girlfriends showed up, it made perfect sense to welcome them with a freshly baked marbled cake, for old times' sake. While I loved the "true pound cake" recipe back then, I no longer use those proportions to make cake- the equal weights of ingredients is way sweeter and greasier than it needs to be. Instead I used this recipe for marble cake from The Kitchn. A few notes on the recipe: I skipped the ganache frosting- it just isn't necessary. And I made the cake by hand- an electric mixer isn't needed. Instead of the buttermilk, it is fine to use a mixture of yogurt and milk.

The marbled cake turned out beautifully. The vanilla part was soft and vanilla-scented and the chocolate part was nice and chocolatey. In keeping with historic tradition, we polished off the entire cake in one evening; the last crumbs were eaten as we played poker late into the night...

That memorable Memorial day weekend marked the beginning of summer 2017, and the end of Lila's first year of public school; it was a busy and wonderful one and she seemed to thrive in her school. Some of her favorite times in school involved what they call the "specials"- Art, Music and Physical Education. Have you ever seen a bumper sticker that says, "It will be a great day when our schools get all the money they need and the air force has to hold a bake sale to buy a bomber." Yes, well, until that great day arrives, parents in our school have to work very hard to raise funds for these specials, for field trips, enrichment activities and teacher appreciation events that aren't covered by the regular school budget.

I rarely attended PTA meetings this year, but I tried to be a good worker bee and signed up to do simple, tangible tasks- like serving salad at the spaghetti dinner and reading a book aloud in the classroom on Dr. Seuss day. My interest in cooking came in handy when we were asked to contribute items to a silent auction fundraiser. I offered a three hour Indian cooking class- and to my relief someone bought it. It was great fun and something I would certainly offer again.

For the end of school teacher luncheon, I signed up to bring dessert and made these lemon bars. The recipe is a keeper- really easy and really fun to make. It makes a large batch and the bars freeze beautifully. A couple of notes on the recipe: you can cut down the sugar if you wish. And by far the best way to cut butter into flour for the shortbread crust is to freeze the sticks of butter and grate them into the flour. 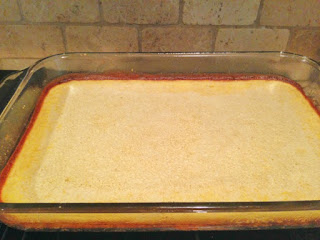 Lila felt bad that the teachers got lemon bars but the bus driver didn't get any, so she talked me into making treats for the bus driver. Together we made another batch of the lemon bars, and while we were at it, also made a double batch of brownies. My go-to brownie recipe is the one for Alice Medrich's cocoa brownies, featured here on Smitten Kitchen. A double recipe fits nicely in a 9 x 13 pan. Half the lemon bars and brownies were packaged up with a thank you note for our very nice bus driver, and the other half went into the freezer for the aforementioned Memorial weekend reunion.

So there you have it- three baked goodies- marble cake, lemon bars and brownies- that are all easy to make, made with simple pantry ingredients, all freezer-friendly and great to share as treats. Happy baking, friends!