About 3 years ago, the no-knead bread recipe was published in the New York Times and it took the food blog world by storm. I remember the time very clearly because I could only watch silently from the sidelines; I was on a blogging break at the time, neck-deep in writing my dissertation and eating suppers of Pepperidge Farm bread and peanut butter, washed down with orange juice.

I missed the no-knead bread bus and never ended up trying the recipe even later, but it was on my mind. Then, a book called Artisan Bread in Five Minutes a Day was written by Jeff Hertzberg and Zoe Francois on a similar theme, making great bread at home with an economy of effort. After waiting and waiting to try these kinds of bread recipes, I finally got this book home from the library last week. Read a review of the book here.

The main idea in the "5 minutes a day" method is:
1. Place water, salt, yeast, flour in a bowl and quickly stir it together.
2. Let it stay on the countertop for 2-3 hours, then move it to the refrigerator.
3. Then, any time in the next week or two, whenever you want fresh bread, break off a piece of the dough, let it rise for less than an hour and bake it.

The first recipe in the book is the master recipe for basic bread dough and that's the one I tried first as Recipe #9: Basic Boule. If you want to try this recipe at home but don't have access to the book, the master recipe has been posted in detail on this blog.

For my very first batch, I halved the recipe, mixing about 3 cups of flour with water and yeast and salt in a large mixing bowl and covering it with a plate. I decided that the original recipe called for WAY too much yeast- I added a teaspoon and that was plenty. Stirred everything into a wet batter and left it on the counter. 2-3 hours later, I peeked it and it was a bubbling mess. I stuck it in the refrigerator. Forgot about it for 2 days, then one evening, pulled it out, made 2 gobs of the dough on a pizza peel (spread with rava instead of cornmeal as an anti-sticking agent, because I did not have coarse cornmeal on hand), and let it rise for 45 minutes. Then, I baked it in an oven with some hot water in a pan underneath to create some steam. The whole technique was so effortless. And I got this: 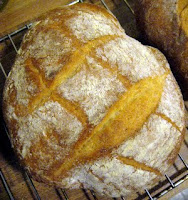 Color me impressed. Perfect crackling crust and soft airy interior. That evening, we made open-faced sandwiches with pesto and roasted vegetables, and since then, we have bread stashed away for toast and PB-J.

Within minutes of baking the bread, I was checking the price of this book online. I never buy cookbooks, rarely finding enough recipes in one book to make it worthwhile, but this one is different. The only reason I don't bake bread as often as I would like is because of the timing and these recipes really help with the time factor.

Now I have a big bowl of olive dough in the fridge. The book has recipes to use this dough in pizza, calzones, stromboli, focaccia and fougasse so I'll have to see what I end up making with it.

See you tomorrow, with the kick-off of the recipe marathon. The participants are waiting at the starting line in the post below.
Posted by Nupur at 5:17 PM