D is for Dum ki Arbi

The "D" of Indian Vegetables

To start off, three D vegetables and four preparations, all vegetables that are relatively unfamiliar to me and that I have never cooked with (what a learning experience this is turning out to be for me).

First up, daikon, the beautiful peppery vegetable that is simply known as radish in India but as daikon in the US and other countries, that was made into a delicious Daikon-Coconut Chutney by Suma of Veggie Platter.

The drumsticks themselves were not forgotten, however, and were paired with some tangy mango in a lovely Konkani Drumstick dal by Ashwini of Food for Thought.

Then there is the unusual cucumber called the dosakaya, made into a very creative, sweet-and-aromatic Dosakaya Breakfast Bread by Linda of Out Of The Garden.

Next come two D ingredients that are staples in Indian cooking.

One is dal, the nutritious lentils and pulses that form the basis of Indian vegetarian cooking, made into an tasty Dal Moghlai by Pavani of Cook's Hideout who adds vegetables to make the dal a two-in-one deal.

The other ingredient is dahi or yogurt, cooked into a tangy sauce with potatoes in the Gujarati dish Dahi Batate Nu Shak by Lakshmi of Veggie Cuisine.

Next, there are two D styles of cooking.
One is the handi (pot) style of cooking, used in a royal medley of mixed vegetables called Diwani Handi Sabzi by Latha of Masala Magic.

The other is the dum (steam) method of cooking in my entry below.

Finally, when the kitchen is running short of all vegetables except the pantry staples- onion and tomato- you can still whip up the tasty and comforting Dadpe Pohe by Manasi of A Cook At Heart, a favorite Marathi snack!

Many thanks to all the participants and hats off to their creativity!

D is for Dum ki Arbi: The "Dum" technique of cooking

Dum, dum pukht to be precise, is a slow, time-honored method of cooking that originated in Moghal cuisine. Dum (pronounce the "d' as in the "th" of "them" and not as in the "d" of "dull") actually means steam, and the basis of dum cooking is to seal the pot completely with some dough and let the contents simmer to perfection, infusing the dish with a heady aroma rather than allowing the flavors to escape. I wanted to name this post: "Dum is the new smart" but thought that people were sure to groan and throw their saucepans at me! :) Read more about dum cooking in this article.
In any case, when I started this series, I had two intentions. One was to share my favorite ways of cooking up vegetables with Indian flavors, and the other was to explore ways of cooking vegetables that were unfamiliar to me. Well, this letter presented itself with two opportunities: to try a style of cooking that is new to me (dum) and to cook a vegetable that I have never cooked with before, and only eaten a few times (arbi).
Arbi, also known by various aliases as arvi and taro and colacassia, is a root vegetable. In fact, it is the root of the plant whose giant leaves are used to make those delicious savory rolls called patra or alu wadi. Read more about this delicious but underrated vegetable here.
So off I went, the intrepid cook :) in search of some arbi. I found the smaller variety of arbi in the local international market. Frankly, the knobby, hairy roots terrified me! 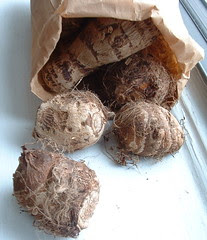 Back home, preparing them was easier than I expected. A word of caution: the juices released when arbi is peeled can be slightly irritating to the skin, so one might want to wear food-prep gloves or coat the hands with some oil at the very least. First, I yanked the hairs off the arbi (surreal, I can tell you) and then used a peeler to peel off the tough skin. Then the vegetable is quite easy to dice up.
I had chosen a rich-sounding recipe from the popular Indian chef Sanjeev Kapoor. An easy-going guy with a charming personality, he gets a lot of credit for bringing restaurant-style cooking to Indian homes through his books and TV shows. This recipe, in typical restaurant style, I might add, calls for deep-frying the arbi and then going through several complicated steps to pull the dish together. I took ruthless short-cuts and ended up with good results anyway. For starters, I roasted the arbi instead of deep-frying it. I tasted a piece after roasting it, and loved the buttery taste. Interestingly, arbi is perfect for this sort of slow-simmered dish, because after roasting, the pieces did not fall apart in the curry at all, they stayed intact and yet absorbed all the flavors.

(heavily adapted from a recipe by Sanjeev Kapoor, serves 3-4) 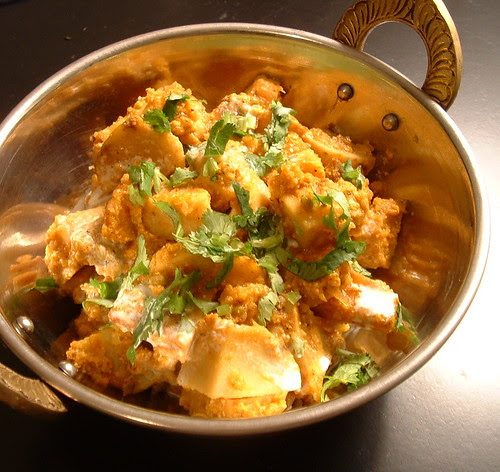 1. Roasting the arbi: Pre-heat the oven to 375 degrees F. Peel the arbi, wash it and cut it into bite-size pieces so you have 2-3 cups arbi in all. Toss it with a tbsp of oil and some salt and pour it on a baking sheet coated with non-stick spray. Roast the arbi until it is golden-brown and tender. This took me 25-30 minutes, stirring occasionally. Remove the arbi from the oven and set aside.
2. Make the yogurt mixture: In a bowl, combine 1 cup yogurt, 1 tsp red chili powder, 1/2 tsp turmeric powder, 1 tsp cumin powder and 1 tsp coriander powder.
3. Make the masala paste: Heat 1 tbsp oil in a saucepan. Fry 2 onions, roughly chopped, until they start browning. Add 1 tsp ginger-garlic paste, 2 heaping tbsp white poppy seeds, and fry for a couple of minutes more. Blend this mixture to a fine paste and set aside.
4. In a small bowl, combine 1/3 cup of atta (whole wheat flour) with some water to make a firm dough (this is for sealing the pan) and set aside.
4. Heat 1 tbsp oil in the saucepan (it is convenient to use the same one that the onion was fried in). Fry the masala paste for 2-3 minutes, then stir in the fried arbi, 1/4 tsp of nutmeg powder, 1 tsp garam masala, 1/2 tsp cardamom powder and salt to taste.
5. Stir in the yogurt mixture and mix well. Add a cup or so of water if the curry appears too thick.
6. Now put a lid on the saucepan. Roll the prepared dough into a long "snake" and press it down firmly to seal the lid on the pan all around, like so:

7. Simmer the sealed pan on very low heat for 20 minutes. Break the seal only when you are ready to eat.
8. Garnish with some chopped cilantro and a dollop of cream, if desired.

The verdict:
Delicious, delicious! I feel good about trying a new vegetable, and we really enjoyed eating it in this rich, royal dish. The "dum" method is a treat because of the heavenly aroma when the seal is broken. When I broke the seal, V was standing behind me, and we both gasped involuntarily at the heady scent that wafted up!
Next time, I will increase the amount of water that I add before sealing the pot, to give the result more gravy...this time, the dish was fairly dry. The curry could also use some acidity, so I might add some tomato puree next time (and there will certainly be a next time).

How do you serve this dish?
I served it with some freshly steamed basmati rice and simple dal fry and the combination was very tasty. This curry would also go well with some rotis or naans (flatbreads) as part of a typical North Indian meal.

Fellow bloggers have come up with many delicious dishes cooked using the "dum" technique:
Dum Aloo (potato) from Food For Thought ,
Another version of Dum Aloo from Recipe Junction,
Dum Bhindi (okra) from A Recipe A Day, and
Vegetable Dum Biryani from Healthy Home Cooking.

Previously on the A to Z of Indian Vegetables...
A is for Aloo Gobi: North-Indian Stir-Fry
B is for Bharli Mirchi: Stuffed Vegetables
C is for Carrot-Cashew Payasam: Desserts
Posted by Nupur at 6:11 AM