One of the most popular (and long-running) events in the food blog world is Weekend Herb Blogging started by Kalyn of Kalyn's Kitchen. I always learn about new and interesting vegetables, herbs and spices through this event, but don't get around to participating much. Now, I am going to use WHB as a motivation to write about some new foods as they find their way into my kitchen.

My obsession with wanting to make this particular dessert started the minute I glanced at this picture and recipe in the November 2006 issue of Martha Stewart Living Magazine. I just *dearly* wanted to make this beauty of a cake: studded with pears (V's favorite fruit) and the color of sunshine because of the saffron. I also imagined that the pairing of pear with ginger would be spicy and delicious. Last weekend, I was assigned to bring dessert to a large potluck-style party. This was just the perfect opportunity to try a new recipe on some unsuspecting guinea pigs!

The recipe called for a few ingredients that I never keep on hand: candied ginger, ground ginger and buttermilk. Thus was the candied ginger introduced into my kitchen for the first time. I bought it from Trader Joe's and the ingredient list was gratifyingly short: just ginger and sugar. 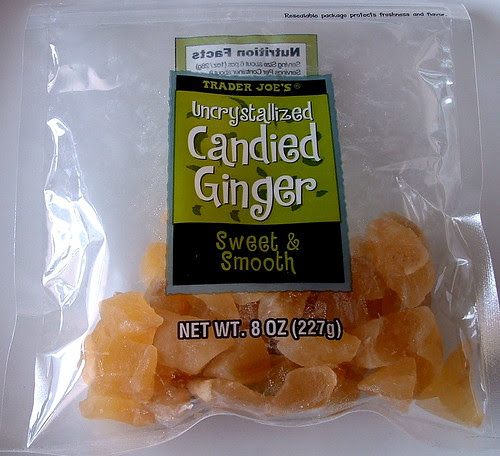 Candied ginger is a simple form of preserved ginger where the ginger is boiled in sugar syrup and dried. You can certainly make your own using a recipe like the one on this page. Generally, after soaking, the candied ginger is rolled in more sugar, resulting in crystallized candied ginger but the one from TJ's is uncrystallized and smooth. I prefer not having that extra sugar, actually.
What can you use candied ginger for? A combination of candied ginger and ground dried ginger gives a great spicy kick to any ginger-flavored sweet food like ginger cakes, gingerbread, ginger shortbread or ginger pancakes. Or this decadent chocolate-ginger tartlet. You can just pop it into your mouth for a sweet gingery treat. 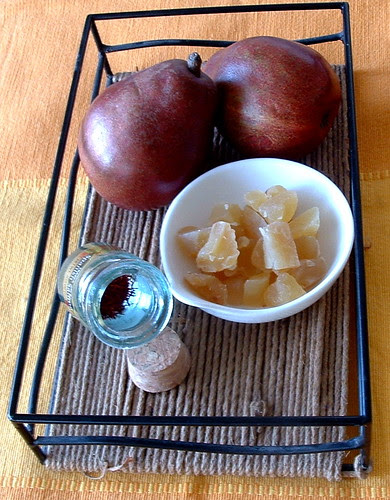 1. I pulsed together saffron and sugar to make, well, saffron sugar. It smells so good! The saffron sugar was creamed with butter and spread on the bottom of an oiled pan. I needed to make two cakes to feed the crowd, so I doubled the recipe.
2. Layering the pear slices: now this was the tricky part. The recipe called for Comice pears, but I was only able to find red Anjou pear. Martha says to peel and core the pears, then thinly slice them (by hand, or using a mandoline). Well, Martha must have a much better knife than I do, as well as vastly superior knife skills, because the pears I had were too unripe to be cut into silky, thin slices. I ended up with something far uglier...this was for cake A. For cake B, I decided not to peel the pears at all, just slice them using the mandoline. Much better! The slices were layered on to the saffron-butter mixture.
3. Next: the batter. This contained buttermilk, eggs and vegetable oil but no butter, and was liberally sprinkled with minced candied ginger and ground ginger. The batter was poured into the pans, and into the oven they went.

As I started cleaning the kitchen after popping the pans into the oven, I clapped my hands to my forehead: I had forgotten to add vanilla extract! The next 40 minutes were spent trying to come up with a way to remedy this. A google search of "forgot vanilla cake trouble-shooting" and other such incoherent phrases yielded no useful information. As the cake baked, the lack of the warm vanilla scent kept reminding me of my foolish omission. I decided to taste the cake, and if it tasted eggy, or if I really missed the vanilla, I would make some honey-vanilla whipped cream to serve with it.

This is what the cakes looked like: Cake A, the ugly one: 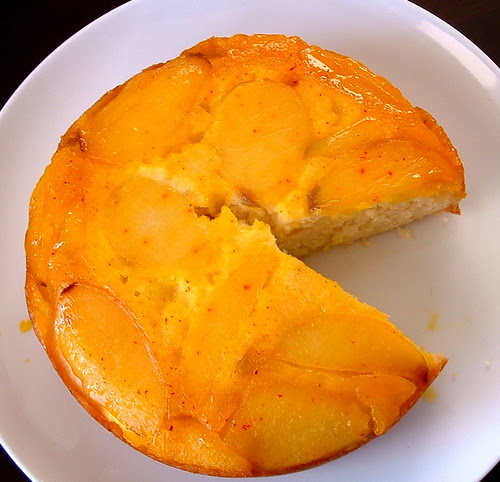 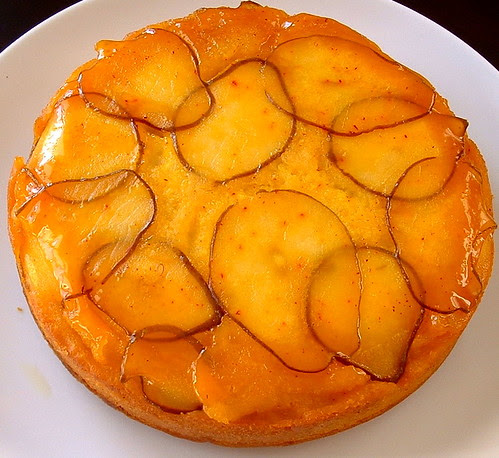 The verdict: I tasted a generous slice from cake A ( resulting in the pac-man-like avatar seen here) and was relieved to find that with the ginger and saffron, I barely missed the vanilla. The cake was quite delicious with a surprisingly prominent saffron taste. The pear layer was too skimpy; next time I will layer the pears on some more, and might use riper pears for a more fruity taste. I think this cake would be best served as a snack, at brunch or tea-time. It does not work so well as an after-dinner dessert by itself, but may work with some caramel sauce or a fruit compote.

And now I have all this buttermilk to use up. What is your favorite recipe using buttermilk? Has anyone tried using store-bought cultured buttermilk in Indian recipes for "kadhi" style recipes? Thanks for your ideas!
Posted by Nupur at 6:59 AM