Vegetable Biryani for a Crowd

B-I-R-Y-A-N-I. The very word conjures up images of a dish that is rich and exotic, redolent with spices and packed with "good eats". And so it is, a layered rice dish of Persian descent, introduced to India via Mughal cuisine. When I was growing up, Chicken Biryani was my Mom's specialty, a labor of love that took her all of Sunday morning to prepare and resulted in a delicious and heavy Sunday lunch to be followed by a sumptuous weekly siesta. This is her style of making biryani, Vegetable Biryani this time around. This is probably the most labor-intensive dish in my entire repertoire for sheer hands-on cooking time, and I allocate about 2 hours of non-stop work to its preparation. It just seems silly to make vegetable biryani for two, and I have adapted it to a larger scale that justifies the labor and feeds a crowd. If you are lucky, there will be leftovers, and biryani tastes even more delicious the next day!
I layer this biryani in a standard Pyrex 9x13 inch dish, which makes sense for many reasons. The Pyrex dish is sturdy and can go from refrigerator to oven to table, so I can make the biryani a few hours ahead of time, heat it until steaming hot, and serve right from it; and the size is generous enough to feed a crowd, say, at a potluck party. This recipe results in a mild biryani which hopefully will appeal to everyone regardless of their spice tolerance. Traditionally, biryani is layered in a metal pot and heated through until the rice at the bottom becomes crispy and delicious, but I am forgoing that for the convenience of using a glass dish. This might not be a dish for a beginner cook to make, but the truth is that it is far simpler than it looks if you follow the steps, so if you have a little experience with Indian cooking, give it a shot!

Here is the recipe, step-by-step... 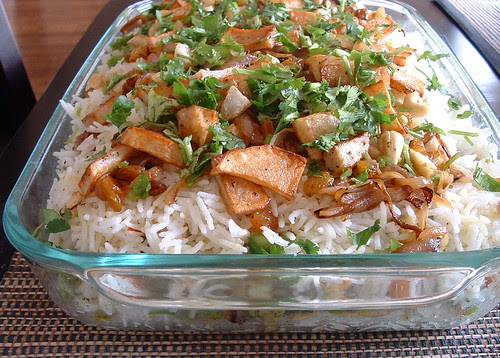 1. Saffron-scented rice: Take 1/4 cup warm water or milk in a small bowl. Add 15-20 strands of saffron and leave it aside to soak. Take 2 cups of Basmati rice in a large pot. Rinse it three times to wash off the excess starch. Add 3 and a half cups of water and bring the rice to a boil, then simmer until rice is just tender. Turn the rice out into one or two large platters. Sprinkle with salt to taste, and mix in the saffron milk. Leave the rice to cool down, then cover and set aside. 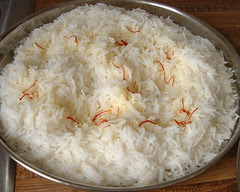 2. Fried goodies: Peel one large or two medium potatoes, and cut into small cubes. Heat some oil in a non-stick skillet, and fry the potatoes until golden, then drain and set aside. To the same pan, add more oil if necessary, and then fry 3 onions, sliced thinly, until golden-brown. Then fry 1/4 cup each of halved cashew nuts and golden raisins. I prefer to shallow-fry these "goodies", but you can deep-fry them if you wish. 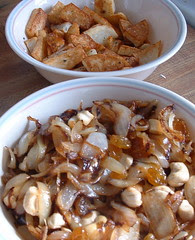 3. Vegetable Curry: I use my usual-suspects mixed veggies- cauliflower florets, peas, diced carrots and french beans. I like this combination for its easy availability and the pretty contrasting colors. Prepare about 4-5 cups of mixed vegetables of your choice and steam them until barely tender. 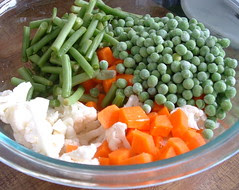 .
Then, make the masala paste by grinding together 2 onions, 2-3 green chilies, a few stalks of cilantro, 1/4 cup of mint and 2 tbsp poppy seeds. In a pan, fry the masala paste until fragrant, and then add 1/2 cup tomato puree, 1/2 tsp turmeric and 1 tbsp of a nice aromatic garam masala. Add salt to taste. Stir in the steamed veggies and fry for a couple of minutes.
4. Cilantro: Mince 8-10 stalks of cilantro and set aside.
5. Layering the Biryani: Now for the really fun part! Take a 9x13 baking dish (or equivalent) and grease it with some ghee or butter or oil. Start with half the rice, followed by some fried onions, nuts, raisins and potatoes, and half the cilantro, like so: 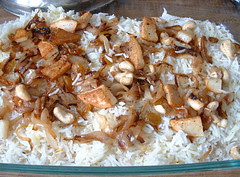 Then the whole of the vegetable curry, spread out as evenly as possible, like so: 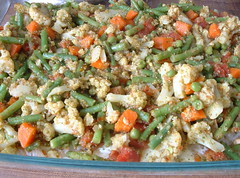 followed by the rest of the rice, fried goodies and cilantro. Drizzle with some ghee if desired and you are done...Ta Da! 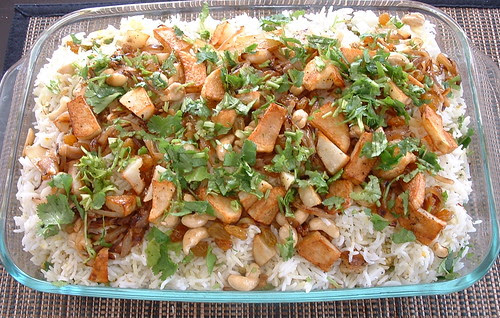 6. Cover the pan tightly with foil, then bake at about 400 degrees F for 30-40 minutes, until steaming hot, or store in the refrigerator for a few hours before baking.
7. Biryani can be served by itself, or with a simple raita or some yogurt on the side.
See you tomorrow, with the D of Indian Vegetables!
Posted by Nupur at 6:51 AM