C is for Carrot-Cashew Payasam

C is for Carrot-Cashew Payasam: Desserts
Bazu, one of your guesses was correct: The C of Indian vegetables uses a beautiful orange-hued winter vegetable...the carrot! Desserts came early in this series, but of course we had to devote one post to the use of vegetables in Indian desserts. And carrots are the quintessential dessert vegetable, with their vibrant color and inherent sweetness. The two most popular veggie-based desserts in India are probably dudhi halwa and gajar (carrot) halwa. The latter wins hands down in my book, because carrots are inexpensive and ubiquitous, unlike the dudhi (bottle gourd), which is difficult to find here in the US.

If you are looking to be sneaky and smuggle in some vegetables into dessert, there are a number of recipes that lend themselves to easy modification. One is the aforementioned halwa, where grated veggies can be cooked in some milk and sugar and then mixed in with some khoya (milk that has been thickened almost to the point of becoming solid). The resulting halwa has the consistency of a thick pudding. Another dessert that is readily "veggie-fied" is kheer. Halwa needs khoya and kheer merely calls for milk or evaporated milk, making it the more low-maintainance choice. The links at the end showing recipes from other bloggers will give you an idea of how one can cleverly make an array of vegetable-servings-masquerading-as-desserts!

I have already made one version of carrot kheer last year. Since then, I have made it numerous times and it is a definite crowd-pleaser. For this series, I was looking for a variation, and came across the recipe for carrot-cashew payasam in one of my favorite cookbooks: Dakshin by Chandra Padmanabhan. Payasam is the Southern Indian counterpart of kheer. A combination of pureed carrots and raw cashew paste, it looked creamy and decadent and I just knew I had to make it for this series. 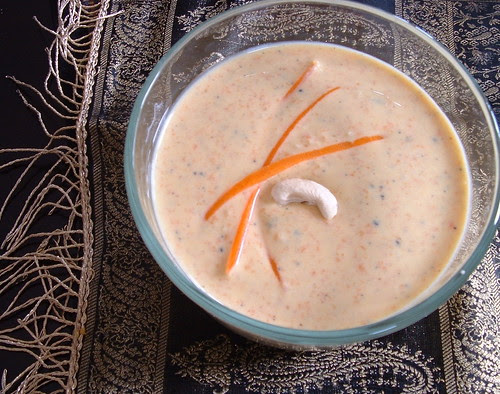 Adapted from Dakshin by Chandra Padmanabhan
(serves 4)
1. Soak 1/2 cup raw cashew nuts in 1 cup of warm milk for 20-30 minutes.
2. Grate 1/2 lb carrots, then saute them in 2 tbsp ghee for a few minutes until just-tender.
3. Bring 6 cups of milk to a boil, keep stirring and simmering until the milk reduces to half the original volume.
4. Meanwhile, drain milk from the soaked cashews (save the drained milk!). Place cashews and sauteed carrots in a food processor or blender and make a coarse paste, adding some of the drained milk as required for the grinding.
5. Add the cashew-carrot paste and 1/2 cup sugar to the milk. Stir well and cook for a few minutes.
6. Stir in 1 heaping tsp powdered cardamom and stir well. Remove from heat.

The verdict:
I did enjoy this kheer a lot, but the rich taste of the cashews was a little lost in the preparation, I thought. I also don't love the pureed carrots, preferring to leave them in the grated form. In the end, I keep going back to my old version of the carrot kheer. This recipe is worth trying, though: both variations of carrot kheer have their own unique taste.

How do you serve this dish?
This kheer is very rich, and best enjoyed chilled, served in a small bowl (katori). It can also be served warm, as a side-dish to some hot, puffy puris (fried flatbreads). You can get creative and try it as a sauce for some vanilla ice cream, but I have not tried that yet! Warm carrot halwa and ice cream are a classic combination, often served at Indian wedding receptions.

Previously on the A to Z of Indian Vegetables...
A is for Aloo Gobi: North-Indian Stir-Fry
B is for Bharli Mirchi: Stuffed Vegetables
Posted by Nupur at 5:27 AM