Holiday season is in full swing and this week brings Diwali, the festival of lights. Even to someone like me who is not religious to say the least, Diwali has a lovely symbolism.

The way Diwali was celebrated in my parents' home growing up was simple and meaningful. There was the making of the faraal, sweets and savories that are typical to this festival. There was the arranging of faraal in covered platters to be exchanged with family and friends. There was the ritual early morning bath using a special herbal paste called utna, followed by the wearing of a new frock, typically sewn by my mother's dear friend who is a seamstress. There were, of course, the lights that the festival is named for- tiny oil lamps lit in a row and the paper lantern hanging by the front door, its streamers fluttering in the breeze. Books and tools were honored and thanked for the prosperity they brought into the home.

All this was against the backdrop of the sights and sounds and smells of firecrackers. I've had a hate-hate relationship with firecrackers from a very early age and the fact of the matter is that they ruined Diwali season for me every time. I would choke on the acrid fumes of firecrackers and my heart would thump in alarm and dismay every time a loud string of "bombs" went off. It sounded like a war. With debris everywhere, it even looked like a war zone. I knew people who boasted about how much money they spent on fireworks and competed with neighbors to see who had the loudest and most garish Diwali. I was a very melancholy child and heartbroken at hearing these loud things go off, these firecrackers made by the tiny hands of child laborers and representing waste and callousness in my mind. So all in all, I'm thankful that I don't have to deal with that kind of Diwali any more.

We had the quietest, smallest Diwali celebration yesterday but we enjoyed it very much. We simply lit a few oil lamps. Like Christmas decorations, these are lamps I've collected or been gifted over the years. All year they sit in a box, to be lit on Diwali. Our niece came down for the weekend, and I made the most popular meal around these parts- pav bhaji and rasmalai. 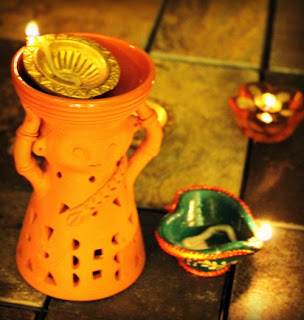 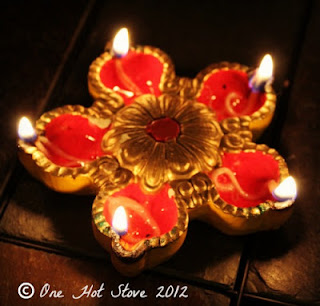 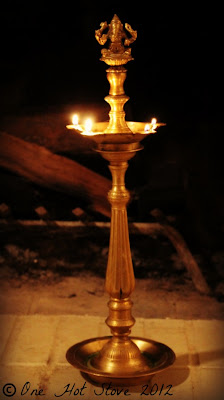 To all my friends who celebrate it,

I hope the festive season is a joyful, peaceful and meaningful time for you.
Posted by Nupur at 7:13 PM