This is my entry for the monthly Jihva For Ingredients, an event that celebrates all the wonderful natural ingredients that form the backbone of Indian cuisine! JFI is the brainchild of Indira from Mahanandi. This month, JFI is being hosted by Sangeeta of Ghar ka Khana. The name of Sangeeta's blog means "Home-Cooked Food", and she has chosen a vegetable that is cooked in hundreds of home-style ways: the EGGPLANT! 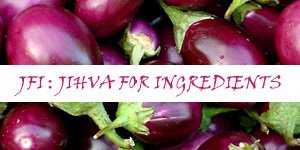 Those richly colored royal purple eggplants- I love them every day and in every way! I was so overwhelmed with ideas of dishes that I could make for this event that I almost ended up not participating at all. Finally, I decided to go for something super-simple. A typical way that I remember eating eggplant as a kid was in a vegetable dish (called bhaaji in Marathi) called Varna-Vaangi which fits in with the "Mixed Vegetables" theme from yesterday's post. Vaangi is eggplant, and Varna are either the same or very similar to the hyacinth beans called Valor (see a gorgeous picture on this post on Jugalbandi). The texture of the silky-soft cooked eggplant contrasts beautifully with the fiber-rich mouth-feel of the beans. The pairing of beans and eggplant is quite traditional, and very tasty. See another example of this combination here.

The only problem is that the typical eggplants used in Indian cooking, as well as these hyacinth beans are not very accessible to me- they require a trip to the International market. I decided to use the more easily available Italian eggplant and substitute the beans with endamame or soybeans (I have been wanting to try them for a while, and was even more inspired by Cooker's post). Endamame is a traditional Japanese ingredient but can be used anywhere beans are. So here it is, eggplant and endameme cooked together in a simple and flavorful way. If you cannot find soybeans, they can be substituted with lima beans. 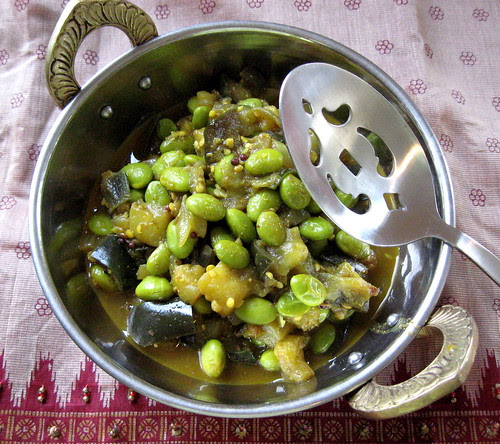 (My spin on a traditional recipe, serves 3-4)
Ingredients
1 medium Italian eggplant, or equivalent amount of small ones
1 C endamame/ soybeans (fresh or frozen)
1 heaped t cumin-coriander powder
1 t goda masala
2 T crushed roasted peanuts
1/2 T jaggery powder
Tempering:
2 t oil
1 t mustard seeds
1 t cumin seeds
pinch of asafoetida
1/4 C chopped onion
1/2 t turmeric powder
1 t red chili powder (or to taste)
salt to taste
Method:
1. Wash the eggplant and cut into medium dice. If the eggplant is fresh, there is no need to take the trouble of peeling the eggplant, or of salting it to draw out the bitterness. There should be no bitterness to begin with. 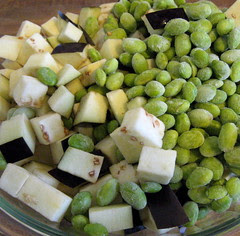 2. In a saucepan, heat the oil. Add the tempering ingredients and stir around until the onion is slightly browning at the edges.
3. Add the diced eggplant and the endameme and stir to coat with all the spices.
4. Add cumin-coriander powder, goda masala, peanuts and jaggery, then stir in 1/4 cup of water (to get the steaming started). Cover and cook for 10-15 minutes, stirring ocassionally, until the eggplant is tender (by which time, the endamame will definitely be cooked).

I served this delicious vegetable with some cool yogurt rice. I made yogurt rice my usual way, except for adding some finely diced cucumber to it. I picked up this idea from some book or blog...can't seem to remember. But the crunchy cucumber tastes terrific in the yogurt rice, and the combination with this flavorful vegetable was a winner. 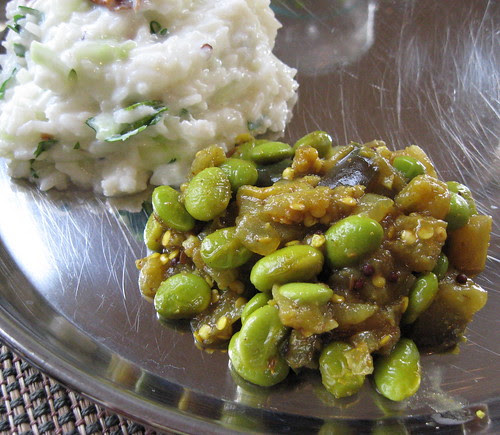 For a spectacular list of delicious eggplant recipes, check out Sangeet's round-up!
Posted by Nupur at 5:42 AM