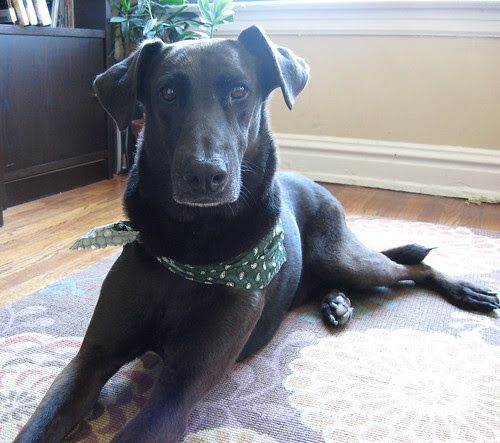 Of all the thousands of pictures we have taken of Dalu, this is one of my favorites. It captures the quintessential personality of Dale- innocent and child-like, yet dignified; a little bewildered by the big bad world around him. Although Dale is nearly eight years old (middle-aged in doggy terms), people still stop us in the street and ask us if he is a puppy...this happens almost every day.
Dale gets groomed every other weekend and they often send him home sporting a colorful printed cotton scarf like the one he is wearing in the picture. I think the scarf looks absolutely adorable on him, but V insists that it makes him look like the neighborhood goonda (thug) and keeps saying, "kya, Dalu Bhai", and "kassa kai, Dalu Dada" to him! The poor puppy!

To celebrate RCI: Maharashtra, I tried three Maharashtrian recipes from my fellow bloggers...

Sabudana Khichdi, a stir-fry of sago pearls and peanuts, is a typical Marathi dish that most people really enjoy. However, a bad batch of sabudana (or a less than perfect technique) results in a gummy dish that is the stuff of nightmares. Imagine my delight when I came across a recipe that replaces sabudana with Israeli Couscous, pearl-like toasted pasta. I had to try it! I followed the recipe quite closely, except that I made the khichadi in a mixture of 1 T oil and 1 T ghee, as I normally do, instead of all ghee as is traditionally done. Can you tell that this khichdi is made with anything other than sabudana? The taste is a little different (as expected) but the result was delightful. Kudos to Evolving Tastes for being so creative!

The next dish is a snack: Cornflakes Chivda. Chivda is like a savory trail mix, with some puffed crispy grains, nuts, and raisins. I have never met a chivda that I did not like! However, the cornflakes chivda is India is made by deep-frying cornflakes, which is why I never tried making this, at home. TC's recipe is wonderful: using store-bought cereal, and only a little oil for the tempering. The fennel seeds in the recipe are really important, IMHO. It is amazing how a bitty teaspoon of the fennel seeds transformed the taste of the chivda. 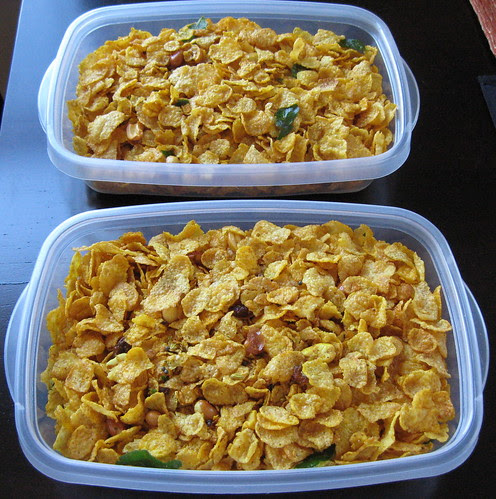 Just like the Cooker's son's teacher, I "can't get enough of it"! I have made two huge batches of the cornflakes chivda already. The first time, I filled boxes to take as small home-made gifts to two beloved friends in NYC. The next time, we were invited to a last-minute lunch party, and I had no time to get the customary hostess gifts like flowers or wine, so I showed up with a box of freshly made cornflakes chivda! The feedback was great :) Thank you, Cooker ji, for a delicious recipe; it is a keeper.

The third recipe represents a baby step forward in my growth as a home cook. When I first started cooking, it was easy one-dish meals. Then the traditional Indian dishes, then learning how to put together simple menus for entertaining. Now I am able to handle most stove-top cooking, and learning to bake, but there are some categories of cooking that still intimidate me: pickles and jams being two prominent ones. So when I read Manisha's post about the No-Oil Lemon Pickle, with crisp instructions and beautiful step-by-step pictures, I summoned up my courage and decided to take the plunge! I followed her instructions precisely, and this is what the pickle looked like right after it was made:

Every day, I walk around the apartment with the pickle bottle, trying to find the sunniest spot to cook the pickle in. Every other day, I stir the pickle with a dry blunt knife, then stand over the sink, licking the knife clean :) The pickle is now only two weeks old, and needs to cook for a couple more months, I think, especially since I am not able to provide it with full-on sun all day. But last night, we tried some as an accompaniment to a simple dinner of khichdi-raita, and it was already delicious! V announced that it "tastes like lemon pickle" (ya think?). I am just so thrilled that I now have a bottle of my own limbache lonche and that when friends visit, I will be able to scoop some into a little jar for them to take home. The little things that money can't buy! Thank you, Manisha, for being such a wonderful teacher.

Reminder for RCI: Maharashtra...Entries for this event are being accepted until 6:00 am (CST) on June 26th. When you post your entry, please don't forget to send the e-mail with the link! Due to time constraints, I am *completely* unable to accept any late entries, sorry about that. Thanks for your enthusiastic participation! It is going to be a treat to put together this round-up.

See you on Sunday with the V of Indian Vegetables! Entries for this event are due by Saturday night.
Posted by Nupur at 5:34 AM