Three stellar food blogs- Cooksister, The Passionate Cook and Spitoon Extra, have come together to create a brand new food blogging event that is designed to be easy and all-inclusive. It is called "Waiter There's Something In My..." and January's theme, fit for the chilly season, is STEW!

When I read the theme, my first thought was, "Oh, Indian food does not have too many stews", and my second thought was, "Oh, but Indian food is ALL stews", for what else are curries and dals, but stews? Stews are a food that can be expansively defined as anything liquidy with big chunks of something in it, whether meat or vegetables or what-have-you. After much deliberation about whether to try a new exotic stew, maybe an African peanut stew, or whether to try a vegetarian version of "chicken soup with dumplings", I came full circle and settled on something familiar, comforting and low-maintainance, for those are the exact three qualities why stews are so well-beloved.

I decided to put a spin on a delicious Indian stew called Dal-Dhokli. It is a regional specialty, coming from the Western state of Gujarat. In the tradition of Gujarati food, it consists of a sweet-tangy-spicy split pea stew (dal) in which you cook little whole-wheat dumplings (dhokli). The result is a nutritious one-dish meal which has melt-in-the-mouth wheat dumplings swimming in a tasty protein-rich broth. I put a spin on the traditional version by adding chopped fresh spinach to the dumplings, which adds color, flavor and nutrition to this dish. 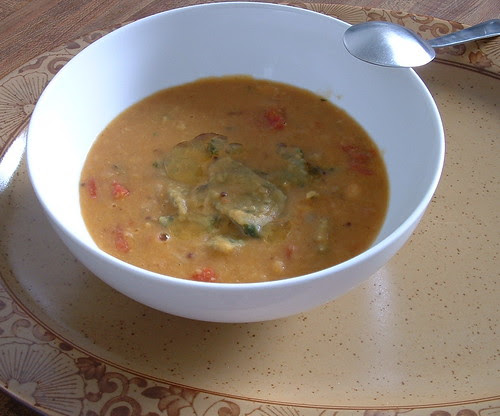 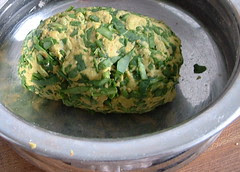 3. Making the dal: Heat oil in a large saucepan. Temper with mustard seeds, cumin seeds, curry leaves, asafoetida and stir for a few seconds. Add onion and stir until onion is translucent. Add ingredients from turmeric to garam masala and stir for a few seconds.
4. Stir in the tomato, cooked dal, tamarind paste, jaggery and salt and bring the dal to a boil. Taste and adjust for balance of sweet, salty and sour. Keep the dal simmering.
5. Now, make the dhoklis. Divide the dough into four parts. Using some extra flour, roll out each part as thinly as possible, then cut into diamond shapes, or any shapes you like. 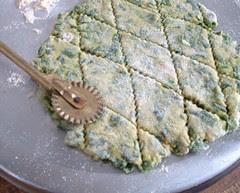 Add the dough shapes to the boiling dal and cook them for 5-8 minutes, or until the dough is tender and cooked through.
6. Let the dal-dhokli rest for 5 minutes, then serve the stew piping hot, drizzled with ghee (clarified butter).

Dal-dhokli is a popular dish in the food-blogosphere. Check out these traditional versions from Luvbites and The green jackfruit. I found two exciting variations too: Dal dhokli stuffed with potato presented in a beautiful step-by-step manner on My Khazana of Recipes and mutter dhokli (dhoklis in pea curry) from Garam Masala.
Posted by Nupur at 1:39 PM