Dale shows off his new scarf while lounging around at home on a cold winter day... 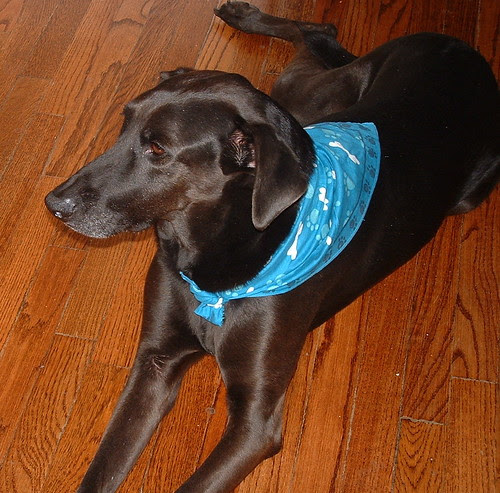 See all the puppies playing at Sweetnicks, where they gather together for weekend dog blogging.

And now for some weekend jabber...
I'm still going nuts over the JFI Coconut round-up: Last week, I tried the Brussels Sprouts stew contributed by Menu Today. Believe it or not, I only tasted brussels sprouts for the first time last month at a Christmas dinner at the home of a wonderful friend, where brussels sprouts were served in a delicate, creamy sauce. It was love at first bite and I knew I has to try cooking this cute little vegetable. The stew was just the thing for a crisp, cold night. Lazy as I am, I simplified the recipe by not pre-cooking or stuffing the brussels sprouts. I started by frying onions and tomatoes, then adding trimmed, halved brussels sprouts and simmering them with the coconut-spice paste. The result was divine, and very rich with the combination of cashews and coconut. What I really love about the recipe is the way a local vegetable that is not found in India has been adapted to Indian cooking with such great results.

Last Saturday, we enjoyed a very low-maintainance, informal and delicious taco night with two good friends. Now, I do enjoy spending long hours making food for friends and family, no doubt about it, but every once in a while, it is great to take the pressure off and take shortcuts shamelessly. I would call it Semi-Homemade if I did not hate that phrase with such a vengeance! :)
I bought two kinds of taco shells: hard crispy taco shells (before serving, just throw them in a warm oven for 5 minutes to freshen them up), and soft flour tortillas (before serving, wrap them in a paper towel and microwave for 15-20 seconds). I prepared two protein-rich fillings: One was a delicious recipe for Chili Pinto Beans shared by Susan of Fatfree Vegan Kitchen. Susan's recipe calls for pressure-cooking, making it the fastest way ever to get nicely seasoned beans on the table. The other filling was a mock chicken filling. I used Morningstar's meal starter chicken strips. The first time I tasted these chicken strips, I almost spat them out because they tasted too much like the real thing! I am not one for eating fake meat every day, but it is nice to use once in a while. I don't like that these chicken strips are pre-seasoned, though. Why call it "meal-starter" if you sell it pre-seasoned? Anyway, I sauteed some onions and peppers, and then stirred in the mock chicken, and seasoned with some oregano, cumin, cayenne pepper, black pepper and lime juice. 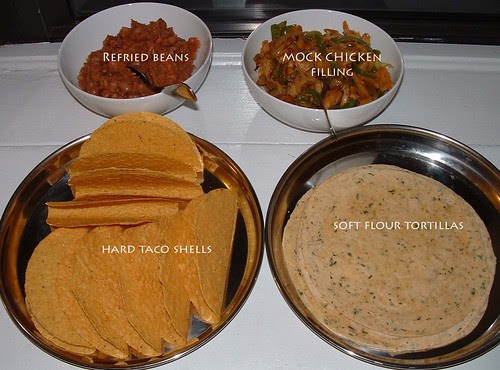 Next comes the tray of fixin's...the most fun part of the taco party. The fixin's I used: Shredded lettuce, minced cilantro, shredded Monterey-jack cheese, sour cream, hot sauce, two types of store-bought salsas (one a mild and sweet corn-chile salsa, the other a tangy and fiery habanero-lime salsa), and roasted peppers. Roasting the peppers is easy (not to mention more energy-efficient) in a toaster oven. Pre-heat the oven to 375 degrees F. Spray a small baking tray. Wash and dry 10-12 small sweet Italian peppers, then toss them lightly with some olive oil. Bake, turning once or twice, till peppers are soft and have charred spots. Cool, then slice into strips. The peppers were delightfully sweet and melt-in-the-mouth! 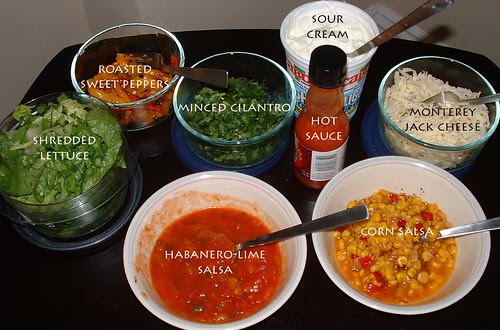 Apart from soaking the pinto beans and starting the pressure cooker, all the prep for taco night took me an hour from start to finish, including clean-up. What a divinely lazy way to entertain! Once the food is laid out, everyone just assembles their own tacos. If I were to complicate this party, I would have made margaritas, homemade salsa, some tortilla soup, nachos as appetizers and maybe a flan for dessert. But simple can be good too!

Finally, a feast for the eyes: Go look at the most beautiful food-blog photographs of December at the Does my blog look good in this? event hosted by Annie of Bon Appegeek.

Enjoy the weekend, everyone!
Posted by Nupur at 6:59 AM