A is for Aloo Gobi

A is for Aloo Gobi: The simplest stir-fry (North-Indian style)
We kick-off the series with a crowd-pleaser. Aloo Gobi simply means potato-cauliflower, a combination of two beloved vegetables cooked together with some simple spices. The humble aloo gobi can be found on the menu of practically every Indian restaurant on the planet, although one might say that it is more of a North Indian style recipe, originally from the Northern state of Punjab. So aloo gobi is an example of a simple stir-fried vegetable dish, North-Indian style, and is homely enough for everyday meals, and loved enough to be served at a nice dinner.

There are dozens of recipes for making aloo gobi; in some cases, potato cubes and cauliflower florets are deep-fried (!) before being tossed with spices, in some recipes, you would add some tomato to the stir-fry resulting in a light curry. My version of aloo gobi is the simplest possible. It calls for very basic ingredients and not much oil. You do not need an extensive Indian pantry to make this dish: it only calls for 6 spices (from top to bottom in the picture): cumin seeds (1), red chili powder or cayenne pepper (2), turmeric (3), cumin powder, coriander powder (4 is a blend of cumin and coriander powder that I make at home but you can just use the separately ground spices as they are sold), garam masala (5). 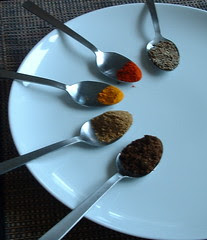 The best part is that all these spices, except maybe garam masala, are available in just about any grocery store/ supermarket. And even garam masala is now available in many of the better food stores such as Whole Foods and spice markets such as Penzey's as well as Indian stores and International stores everywhere. You can make your own blend at home using a spice grinder too. The liberal use of garam masala is the hallmark of Punjabi cuisine.

You start making this dish with a little prep: Chop a small onion into thin slices, cut a cauliflower into bite-size florets and wash, peel and dice two potatoes into medium cubes. Then set out your spice bottles and we are ready to make some aloo gobi! 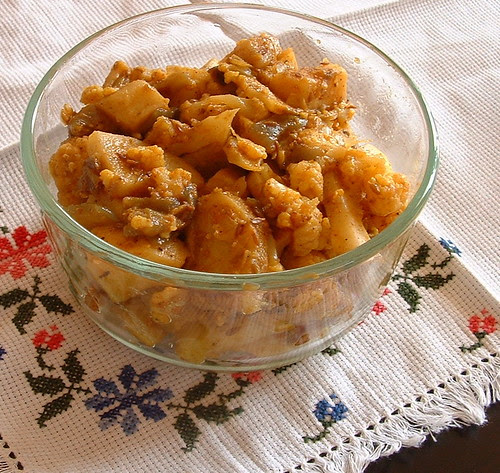 (serves 4-5)
Ingredients:
1 medium-large head of cauliflower, cut into bite-size florets
2 medium potatoes, peeled and cubed
1 small onion, sliced
2 tbsp oil
1 tsp cumin seeds
1/2 tsp turmeric powder
1/2 tsp red chili powder (cayenne pepper)
1/2 tsp cumin powder
1/2 tsp coriander powder
1 tsp garam masala
1 tsp salt (or to taste)
Method:
1. A wide saucepan is ideal for making aloo gobi as it has a large surface area for the vegetables to come in contact with heat. Heat oil in the pan on medium heat. Add the cumin seeds and stir until they sizzle. This is called "tempering" the oil as the oil acquires a wonderful cumin flavor during this step.
2. Add the onion and stir-fry for a few minutes until onion is starting to brown at the edges.
3. Lower the heat and add in the spices from turmeric to coriander powder. Stir only a few seconds to get the spices coated with oil.
4. Add the potato and cauliflower and stir well to mix in the spices. Add the salt and garam masala.
5. Let the vegetables cook until tender. My usual method is to cover the pan and let the veggies cook in their own juices which are released due to the salt. The vegetables at the bottom of the pan get browned, and you keep stirring every 2-3 minutes to evenly cook the vegetables. If you feel like there is not enough steam building up and the vegetables are sticking at the bottom, add 1/4 cup of water. Insert a knife point or skewer into a potato cube to test for tenderness. Turn off the heat once vegetables are tender (do not over-cook).
6. Let the "subzi" (vegetable) rest for 10 minutes, then serve warm.

Variations on a theme: This is the simplest stir-fry and these are some easy ways to jazz it up...
1. Garnishes can take the dish to a whole new level. Minced cilantro is the easiest garnish for color and flavor. The other one is a squeeze of fresh lemon juice; this really brightens the dish. Both garnishes are added right after you turn off the heat after the dish is cooked.
2. Ginger makes a wonderful pairing with the vegetables and the spices. Take a knob of fresh ginger and peel it (I use the edge of a spoon to do this), then mince the ginger. Add one tsp of minced ginger at step 3 of the recipe.
3. Make this a mixed-vegetable dish by using only 1/2 cauliflower and 1 potato and instead adding 3/4 cup diced carrots, 1/2 cup green peas (frozen works great) and 3/4 cup of trimmed and chopped green beans.

How do you serve this dish? The traditional way is to (a) scoop it up with flatbreads like roti or naan and (b) eat it with some dal and steamed rice. But you can let your imagination run wild and eat it (c) stuffed into a pita, (d) on a salad bed (cucumber, tomato, radishes, chopped and tossed with some yogurt), (e) in a sandwich with a slice of cheese.

The humble aloo (potato) is beloved in Indian cuisine...and is combined with a variety of vegetables to make easy everyday stir-fry dishes. Here are some dishes made by fellow bloggers. You will see how each cook has his/her favorite combination of spices that go into a stir-fry :
aloo bhindi (potato-okra) from Creative Pooja,
aloo baingan (potato-eggplant) from My Dhaba,
aloo shimla mirch (potato-green pepper) from Arad-Daagh,
You can, of course, combine more than two vegetable for the stir-fry...such as:
aloo matar saag (potato-peas-spinach) from Food In The Main,
and you can leave potatoes out altogether and make a different combination, like this:
gobi-mutter (cauliflower-peas) from Saffron Trail,
Posted by Nupur at 7:56 AM