G is for GHARGE

G is for Gharge.

G is an important letter: it stands for two staples of the Marathi diet. The first is Gahu or wheat. As far as diet staples are concerned, India can be divided more or less horizontally across it's middle: the upper half or Northern India eats wheat as its staple carb, refected in the wonderful North Indian breads such as puris, parathas and naans. The Southern half is the rice bowl of India, with its famous flavored rice dishes and idlis and dosas made with rice flour. Maharashtra is right in the middle: neither Northern nor Southern, and the Marathi diet relies almost equally on wheat and rice. The gharge we make today will contain both wheat and rice components.
The second important "G" is gul or jaggery. Traveling through many parts of Maharastra, one can see gracefully swaying fields of sugarcane. Much of the sugarcane is sent off to refineries for the production of processed white cane sugar, but another important product is jaggery, made in small-scale industries called "gurhal". Jaggery is a smart choice for a sweetener...it is unprocessed and rich in many minerals, including iron. Jaggery also has a wonderful deep taste of its own, much unlike the stark sweetness of refined sugar. We will use plenty of jaggery when we make the gharge today.
"G" also stands for two ever-popular vegetables in Marathi food: gajar or carrot and guvar or cluster beans, a type of bean with a subtle bitter aftertaste, wonderful for making stir-fries.
The gharge or sweet pumpkin puris are so appropriate to make in October! The markets are overflowing with pumpkins of all sizes. In India, I have never seen whole pumpkins being sold. Vendors cut them into reasonably-size wedges. Pumpkin is very popular and is used in a variety of dishes, mostly savoury. But the gharge I am making today are a sweet tea-time snack.
This was my first time buying and cooking pumpkin (yes, I know, I have so much to learn!). I was at Union Square yesterday, a neighborhood of Manhattan beloved for its great Farmers Market. I picked up a pretty small pumpkin for this dish. My ambitious plan was to use the flesh for this dish and to try and carve a little jack o' lantern with the shell, and to make toasted pumpkin seeds. The first surprise came when I tried to cut the pumpkin open. This stuff is hard to cut, but I managed to lop the top off the pumpkin. Next time: scooping out the seeds, along with all the fibers. This was easy and I saved the seeds to roast. Then I wanted to scoop the flesh out but that turned out to be quite impossible. I finally had to hack the pumpkin into pieces (bye bye jack o' lantern) and use a knife to remove the skin from each section before chopping up the flesh.
So now my theory is that carving pumpkins are huge and thus contain enough flesh to be actually scooped out. The one I bought was probably too "baby" to both eat and carve. Am I right? Also people must be using power tools to carve these pumpkins! I know my knife ain't going to work. On to the recipe... 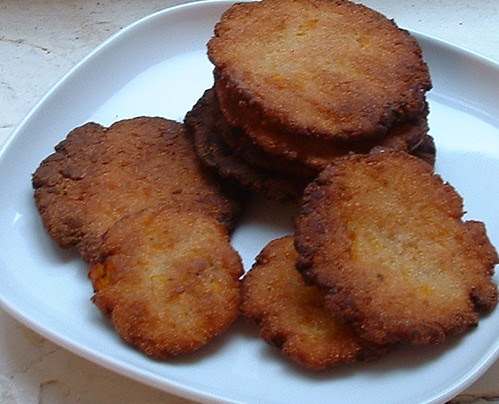 Makes 12-16 medium-sized gharge
Ingredients:
1 cups grated/minced pumpkin
1/2 cup rice flour
1/2 cup rava (cream of wheat)
1/3 cup atta (Indian-style whole wheat flour)
1 cup grated jaggery
1/2 tsp cardamom powder
1/4 tsp salt
1 tbsp warmed vegetable oil
Oil for frying
Method:
1. Combine grated pumpkin and jaggery in a saucepan and cook together on medium heat till pumpkin is cooked and the mixture is a thick sticky mass.
2. To the warm mixture, add the warmed oil, cardamom powder, salt and all three flours. Knead well.
3. Make small golf-ball sized balls of this mixture. Pat each ball into a circle (puri-shaped). This can be done easily on a greased plastic sheet. Mine turned out pretty rustic-looking :) which is to say, all kinds of odd sizes. But it can be done more neatly.
4. Deep fry the gharges till golden-brown in about 1 inch of oil.
5. Drain on paper towels. When gharges are cool, store them in an airtight container.
The verdict: these are easy to make and quite delicious! The outside of the gharge is crisp and the inside is quite chewy. I enjoyed the deep taste of the pumpkin and jaggery. It is a healthy and filling snack. I also enjoyed my first experience cooking pumpkin from scratch.
Two important notes:
1. When frying these, I noticed that sometimes there would be a "pop" in the oil, I think this is due to the fact that the dough has tiny pockets of water from the pumpkin mixture. Do be a little careful while frying.
2. I tried making some, and while they looked fine, they became really hard and a torture to eat. So I would recommend the deep frying. If done properly, very little oil gets absorbed.
Next week we look at "H". This is quite a difficult letter and I would really appreciate some ideas!