E is for EGG RASSA and EGGPLANT KAAP

E is for Egg Rassa and Eggplant Kaap
E is a hard letter! However, it does stand for two English words, Egg and Eggplant which hold great potential in Marathi food, so thats what I went with.
Eggs are a wonder food just like the beans we looked at last week: being nutritious, easily available and inexpensive. Egg curry-Rice happens to be my favorite comfort food. Every single region of India has its own style of making curries and thousands of recipes exist for egg curry. The one I have chosen is the curry or "rassa" ("ras" means juice and "rassa" is a juicy preparation...a curry) from my home-town. My home-town of Kolhapur is an ancient temple town...a city that grew around the famous Mahalaxmi Temple. For a temple town, Kolhapur has plenty unpious bad-boy attitude! It is a city well-known for its colorful language (the kind of profanity thrown around in routine Kolhapuri conversation would make a truck driver blush); bold folk dances called "lavnee"; a love of meat (vegetarians like myself are an exotic species in Kolhapur); and most of all, for its spicy spicy food. The typical feast meal in Kolhapur: a dry mutton dish, a mutton "tamda rassa" (red curry), a yogurt-based mutton "pandhra rassa" (white curry), rice and onion relish. How's that for a balanced diet?? As an aside, Kolhapuri women have a well-deserved reputation for being feisty ("Lavangi Mirchi Kolhapur-chi") as V found out the hard way :)
As a tribute to my Kolhapuri roots, I made an Egg rassa lunch. The curry is not hard to make at all, and the result is very fragrant and tempting. The deep flavors of this curry are very authentic. Anyone who does not care for eggs can easily put some veggies in instead...potato and cauliflower is a good combination.
E is for Egg Rassa
serves 4-6 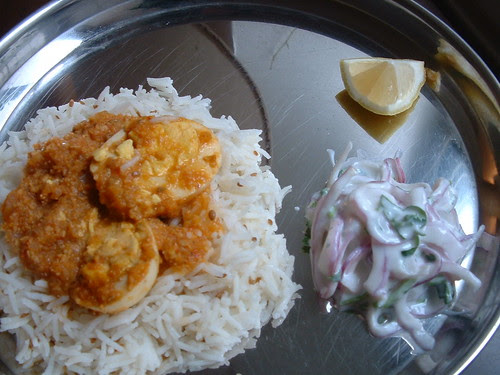 To make a traditional Kolhapuri meal, serve this egg rassa with jeera rice and "dahi kanda" (yogurt-onion relish). Both are very easy to make.

Yogurt-Onion Relish
Slice some onion really really thin (a mandoline would be helpful here). Mix the onion with yogurt, a dash of salt, and some minced cilantro. Add some milk to thin the relish if the yogurt looks too thick.

The next "E" dish is also one of my favorites; because it tastes so good and because it is made in minutes. Kaap means "cut" in Marathi so this simply refers to cuts of vegetables which are pan-fried to make a side dish. This is one of those dishes that you make at the last minute to jazz up a simple meal of dal and rice, or when you need an extra side dish at the last minute.
Eggplant Kaap
serves 4-5 as side dish 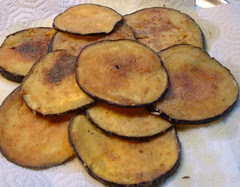 Ingredients:
1 large eggplant
1/2 cup rice flour
1/2 tsp turmeric
1/2 tsp red chilli powder/ cayenne pepper
Salt to taste
Oil for frying
Method:
1. Wash the eggplant and cut into slices crosswise. The thickness of the slices can be 1/4-1/2 inch thick, depending on whether you prefer the "kaap" crispier or "meatier". Set aside. Some people peel, salt and drain the eggplant but I have never found this to be necessary.
2. On a plate, mix the rice flour, salt, turmeric and chilli powder.
3. Heat 1/2 inch of oil in a skillet.
4. Dredge each slice in the flour mixture, patting so that it gets coated on each side, and shallow-fry the eggplant on each side till crispy. Drain on paper towels.
Serve hot with rice and dal. Other vegetables that make good kaap are: raw plaintains, potato, yam, pumpkin. A mixed "kaap" platter is a real treat!

That concludes our "Egg-citing" E-journey. The next letter is "F". Hmmm...any ideas for this one?
Posted by Nupur at 7:21 AM