F is for Farazbi Patties and Fanas Bhaji

F is for Farazbi Patties and Fanas Bhaji

This weekend finds us at the letter "F", not the easiest one but we shall see. The most anticipated "F" in any Marathi food must be Faraal. This is not a single dish, but a collective name for all the mouth-watering goodies that get made for "Diwali"...the festival of lights. Come Diwali, households everywhere start the holiday cooking in earnest. Both sweet and savoury goodies are made and stored for the festive season. Most of these are snacks which can be stored for days in an air-tight container. Sweets can include turnovers stuffed with coconut (Karanji) and round balls made with sweetened chickpea flour (besan ladoo). Savouries often include the ever-popular chivda and spicy fried spirals called chakli. This faraal is served to friends and relatives who visit during the festive season. Platters of faraal are also exchanged between friends and neighbours. We will save the faraal-making for November, when Diwali rolls around. Speaking of festivals, Cathy is hosting a holiday-themed blogging-by-mail where bloggers and non-bloggers alike are invited to exchange care packages through the mail, so do sign up if you like!
F also stands for two really delicious vegetables: one rather common here in the states and one really quite unusual. 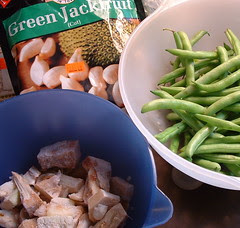 Did you guess what they are? The first is farazbi or green beans. These are found just about everywhere...in the US, green bean casserole seems to be very popular around the holidays. In Marathi food, the farazbi plays many roles. It is served as a simple vegetable with dal and rice, and also is part of all mixed-vegetable dishes like pilafs and curries. Today, I am making an appetizer with farazbi...potato patties stuffed with a spicy green bean mixture. These are dipped in flour paste and rava (cream of wheat) instead of egg and breadcrumbs and turn nice and crispy.
Farazbi Patties 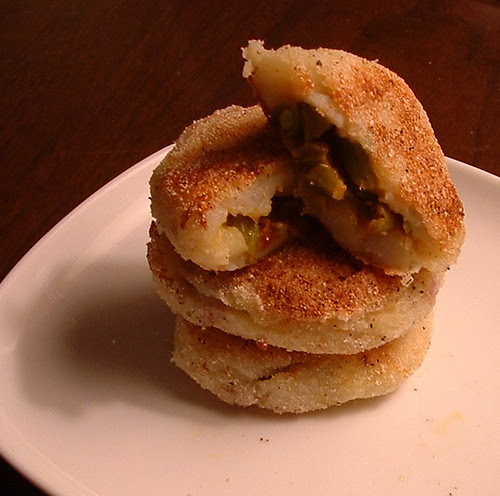 Ingredients:
For filling...
2 cups green beans, trimmed and chopped
1 small onion, minced
1 tsp cumin seeds
1 tsp ginger-garlic paste
1/4 tsp turmeric
1/2 tsp red chilli powder/cayenne pepper
salt to taste
1 tbsp oil
For potato mixture...
4 medium potatoes, boiled
salt to taste
oil for frying
1/2 cup rava/cream of wheat or cornmeal
1 tbsp cornflour/ all-purpose flour
Method:
1. Heat 1 tbsp oil in a skillet. Add the cumin seeds and onions, then the rest of the ingredients for the filling. Stir fry for a couple of minutes, then cover and cook till the beans are cooked well. Set aside.
2. Mash the potatoes with the salt and knead to make a soft potato dough. Set aside.
3. Assemble patties: Grease your palms, then place a lemon-size potato ball on it. Flatten to a disc. Add a spoonful of filling in the center of disc, then bring up the edges and seal them around the filling. Flatten this patty, make all patties this way.
4. Mix the cornflour with 1/4 cup water to make a thin paste. In another dish, place the rava or cornmeal.
5. Dredge each patty in the flour paste, then the rava/cornmeal, then shallow fry the patties till golden brown.
6. Serve hot, with any chutney or ketchup.

The second vegetable is an exotic tropical one: fanas or jackfruit ...yes, the same one that Mika's blog is named after. This is a formidable fruit, huge and prickly. It grows in the humid coastal regions of India, and when I was a kid, folks visiting from the Konkan coast would often bring over jackfruits from their gardens. The ripe jackfruit is good to eat; although with its distinct aroma, it is something of an acquired taste. Raw jackfruits are made into a delicious curry. I have never cooked jackfruit before, and don't even have a recipe to cook it. But today I found frozen cut fanas in the Indian store and decided to make up a recipe and cook it. My method has absolutely no claims to authenticity! Raw jackfruit, cooked into a curry has an unusual quality: it tastes like meat! The texture is startlingly meaty, and my friend SR tells me that in Bengal, they call jackfruit "tree goat"!
To make this dish, I simply sauteed the frozen jackfruit in some onion seasoned with cumin seeds, mustard seeds, turmeric and chilli powder. I cooked it, covered, till it was tender (10-15 minutes), then garnished with grated coconut and cilantro.
Fanas Bhaji 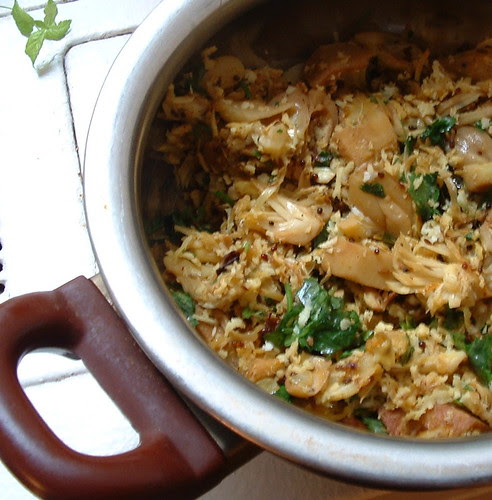 This dish was simple but tasty and I enjoyed my first jackfruit-cooking experience, wimpy as it was with the frozen variety!
I hope you will join me next week for "G" foods. Any ideas for "G"?