I'm back home in St. Louis and getting back to the routine. If this post is more incoherent than usual, don't worry, it is the jet-lag talking. We had a great vacation, and enjoyed the most incredible food, but as we got closer and closer to home, I realized how much I missed my own cooking! It's true- I cook to my own taste, so I love the food I make :D

Coming home, the pantry and refrigerator were as bare as Mother Hubbard's cupboard. I did have some rice and toor dal stashed away, and found a packet of broccoli florets in the freezer. Aha- the makings of a complete home-style meal were emerging here. The only thing needed to complete the meal was this little packet that I dug out from the depths of my luggage. 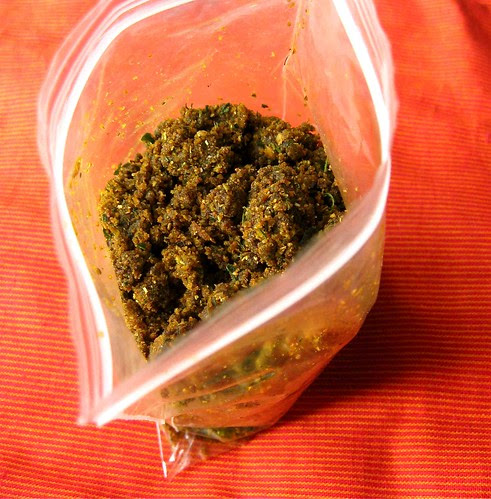 It is some instant amti masala, a loving gift from my Madhuri maushi (my mom's friend, she of the pav bhaji fame). Madhuri maushi is always full of new and creative ideas and every conversation with her is enlightening. She is both a maven and a connector, someone who knows everything that is going on in the city. In one minute, she answered my queries about the price of a stainless steel lemon squeezer, where to buy men's shirts in a particular neighborhood and what's playing in the local movie theaters. I suspect that when the folks at the Yellow Pages need to make an update, they simply call her.

Anyway, the point is that she told me about this instant amti masala. The point is to combine all the elements of the amti into one mixture that you can simply add to cooked toor dal. Amti is already rather easy to make, but this one is for desperate times like if you just got off a 14.5 hour nonstop flight.

She made this by sautéing curry leaves and cilantro in quite a bit of oil, then adding jaggery and tamarind, cooling the mixture and grinding it together with amti masala or goda masala and salt so that all the components of amti-making are in just ONE mixture. This can be stored in the refrigerator for a few weeks. To make amti, add it to cooked toor dal and bring it to a boil. That's it. I think this is a pretty clever idea and a handy shortcut for busy weeknights.

I made a quick broccoli-potato bhaji, and we sat down to a life-rejuvenating meal, complete with freshly-made and imported mango pickle. The pickle was made by a dear family friend who is an absolute expert at making pickles and preserves. This lady is getting older and has arthritis in her hands, but stoutly assured me that as long as she is around, she will keep us supplied with home-made pickles. How my mother manages to pack oily pickles for these long journeys so that not a drop of oil is spilled is simply beyond me. 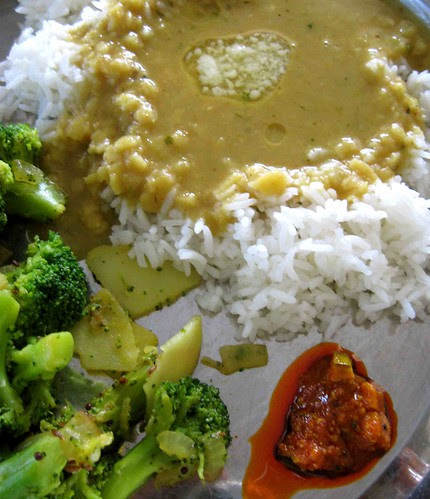 *** *** ***
An Update on Dalu
While planning our long vacation to India, the biggest worry was finding a good home for Dale for the time we would be away. This was also the biggest worry for all of our colleagues and friends and neighbors who would gasp, "But what about Dale??" the second we mentioned our travel plans. We certainly did not want to leave the pup in a traditional boarding place, which is often little more than a cramped kennel. After asking around a bit, we found people an hour's drive away who let the "guest dog" have the run of their home, and let the dog run around all day in the acres of land around their home. Luckily, their rates were affordable as well, and that's how Dale spent a month in "doggie summer camp" while we were away. I'm told he chased their cat around the place and took possession of a couch in the living room. He's back home now, doing what he does best- napping here and there, staring moodily into space. 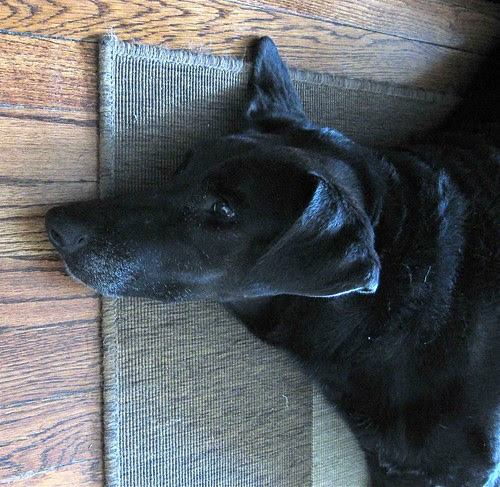