Alone in the Kitchen...

Several weeks ago, I was thrilled to be sent a preview copy of "Alone in the Kitchen with an Eggplant" by Riverhead Books. I love thinking about food and reading about food as much as I love cooking it and eating it. The subject of the book is an interesting one- It is a collection of 20+ essays, all about cooking for oneself and eating alone. I have to say- this was the most interesting and engaging bit of food writing I have read in several months- it seems that the subject evokes some pretty interesting thoughts, both from the editor, Jenni Ferrari-Adler, and all of the contributors. In fact, my mother was visiting when the book arrived, and she read it cover to cover before I even got a chance to touch it. She was quite amused by the theme of the book and thoroughly enjoyed it. 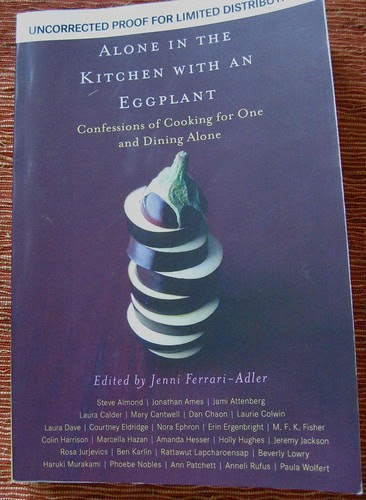 For most of the days since I set up my first kitchen in NYC, I often ate cozy dinners with V and boisterous dinners with my roommate and the parade of assorted friends who would troop through our apartment. I did have days and months of cooking and eating alone, however, and they always coincided with the times when I was busiest and most stressed out at work. Confronted with the prospect of cooking for myself, I would find myself singularly uninspired. I would often go into the kitchen, stand around for a while, sigh, then drink a glass of orange juice and go off to bed. This was a little disturbing- if I love cooking and routinely make full meals for the everyone else, why don't I care enough to feed myself? So I was delighted to find this paradox addressed in some of the essays.

As Jenni Ferrari-Adler says in the book, "A good meal is like a present, and it can feel goofy, at best, to give yourself a present. On the other hand, there is something life affirming in taking the trouble to feed yourself well, or even decently".

In Ann Pratchett's words, "Do I not believe that I am entitled to the same level of tenderness that I extend to others? Or is it, in fact, a greater level of self-love to not put myself through the hassle of making dinner?"

Ben Karlin makes a great point when he says, "I realized the secret ingredient in most great cooking is the confidence of others-the look in their eyes, the nods of encouragement and amazement that what they are eating is so good and you were responsible for it".

Laurie Colwin brings up the issue of the foods we eat when we eat alone by saying, "Certainly cooking for oneself reveals man at his weirdest. People lie when you ask them what they eat when they are alone. A salad, they tell you. But when you persist, they confess to peanut butter and bacon sandwiches deep-fried and eaten with hot sauce, or spaghetti with butter and grape jam." The food I ate alone were not so much bizarre as they were uncharacteristic. On my home-alone nights, I often ate things I would never dream of eating: microwaved frozen French fries, anyone? How about a whole bag of potato chips, with ketchup as a dip?

Obession with particular foods seems to be another hallmark of eating alone. Beverly Lowry says, "...I have routinely stuck to certain dishes, cooking them over and over again, until in memory, the place and the dish merge and become a single event". There are essays about obessive years spent making and eating black beans, spaghetti, instant noodles that tell me that I am not alone. Oh yes, I went through my phases too, of comfort-and-convenience foods- there was a peanut butter sandwich phase, then a poha phase, which ended prematurely when the mega-packet of rice flakes ran out and I refused to make a trip to Queens to buy another...followed by a bread-pizza phase (pepperidge farm sliced bread, topped with pasta sauce and sprinkled with pre-shredded cheese)...Oh, I shudder to think of the things I have eaten for dinner, all consumed while being propped up in bed, in the flickering glow of the TV.

Not all home-alone cuisine is as mortifying as the stuff I ate. Some essays talk about signature dishes that are perfected while one is alone in the kitchen. Dan Chaon, for instance, writes about making big pots of chili, stating that "Cooking chili made me feel festive, even though I was alone in my apartment, as if I would soon be surrounded by a large group of happy people".

And what is it about eggplants and cooking for oneself? Laurie Colwin talks about living on eggplant in the essay that gives the book its title. Recently, two bloggers confessed that if they were to cook for themselves, it would be eggplants/ brinjals that they would cook! So, without further ado, an eggplant recipe...

We do associate eggplants with their lovely deep purple color, don't we? In fact, in Marathi, a particularly fetching shade of royal purple is admiringly called vangi color, generally when referring to lustrous silk sarees and fabrics. So I was a little startled to see this fellow in the market: 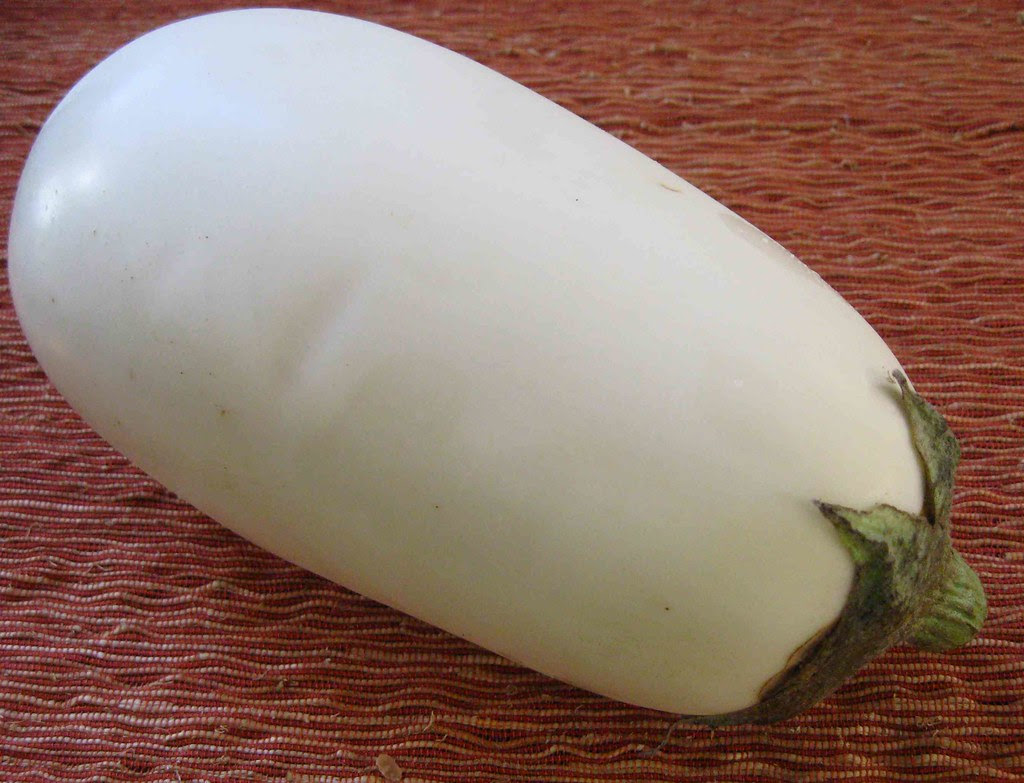 I mean, you often see patterned purple-white eggplants of different sizes, but this one is totally monochromatic. Apparently, the white eggplant is the oldest cultivated eggplant, with some suggesting that the egg-colored and egg-shaped globes were the reason for calling it an eggplant in the first place. Today, these albino varietals are cultivated more as a novelty and the purple ones are the commonest ones. I used the white eggplant just as I would any other eggplant: not bothering to peel it. It tasted tender and delicious!

I used the eggplant in a signature Sicilian dish called caponata. The first time I ever tasted caponata was when our Sicilian friend made it, and it was the most complex and delightful mixture of flavors- fried cubes of eggplant, peppers, onion, tomato mingled with bits of olives and tiny capers. In making "real" caponata, olive il is used in a manner that can only be described as abundant, bountiful, copious! My stingy less-oil version (adapted from a Food Network recipe) turns out more like a stew, but is very tasty all the same. The raisins and sugar in the recipe result in a lovely savory-sweet flavor profile. Next time, I will also throw in some olives. Caponata is wonderful at room temperature, making it perfect picnic food. It also tastes better if made a day before serving. (adapted from Giada de Laurentiis' recipe, makes about 6 servings)
Here is how I made this (with substitutions according to what I had on hand). For the full recipe, please refer to the link above.
Caponata
1. Dice a medium eggplant and saute in 3-4 T olive oil until it starts to soften.
2. Add 1 C diced sweet yellow peppers and saute for a few minutes more.
3. Add 1 medium choppped onion and saute until the onion is transluscent.
4. Add 2 C diced tomatoes (with juice), 2 T golden raisins, 1 t dried oregano, salt and pepper to taste.
5. Cook for 20-25 minutes, stirring often.
6. Turn off the heat, then stir in 1 t sugar, 2-3 T balsamic vinegar and 1 T capers. 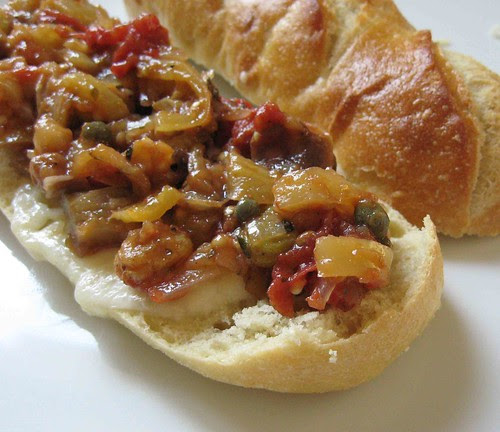 1. Picnic version: Pack your favorite rolls such as demi-baguettes or ciabatta (halved) in a paper bag, mozzarella slices in one box, and caponata in a second box. Assemble sandwiches right before you eat.
2. Toasted version (If the temperature outside is a 108 degrees F and the picnic has to be relocated to your living room): Halve the roll, place slices of fresh mozzarella cheese on the bottom half, and toast until the cheese melts and the bread gets crispy. Stuff with a generous amount of the caponata and serve right away.

Other ways to use caponata...
1. As a spread for crackers or crostini (little toasts).
2. As a pasta sauce, thinned down with some pasta water if necessary.

The Eggplant Caponata Sandwich is my entry to Anupama's Picnic Food Event. Click here for the round-up, full of great ideas for picnic fare!
Posted by Nupur at 5:46 AM