Of Brown Rice and Brownies

A few weeks ago, I realized with a start that in two-and-a-half years of blogging, brown rice has been a rare commodity on this blog. How did that happen? It has something to do with my complicated relationship with brown rice: On one hand, I love the nutty and chewy texture of brown rice, and want to embrace its healthful properties. Brown rice has been a presence in my kitchen for several years and I do serve it now and then. But I still can't wrap my head around eating brown rice on a regular basis, relegating white rice to the status of an occasional treat. I can't fathom eating amti or pithale or sambar with brown rice, and I am not too thrilled with the idea of making lemon rice or tamarind rice with brown rice.

So, for some ideas and inspiration, I turned to my culinary gurus: the food bloggers. Here are some of my favorite experiments with brown rice, all truly delicious!

Idea 1: Adding brown rice to dosa batter. I got this idea from Manjula's recipe for Brown Rice and Barley Dosa. I started making dosas on a regular basis only this year, using the standard proportions of 1 C urad dal: 2 C white rice. For this first experiment, I took a cue from Manjula and used 1 C urad dal: 1 C white rice: 1 C brown rice. The result was very delicious, and definitely a small yet significant improvement, nutritionally speaking. 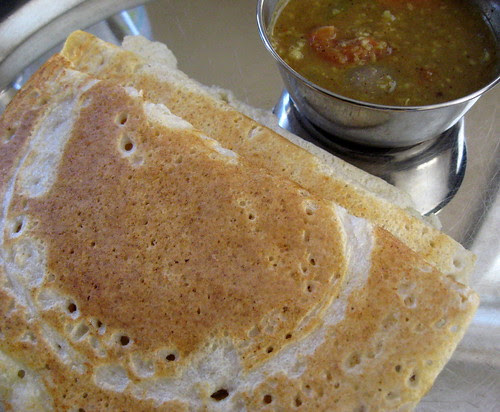 To go with the dosa, I made a Konkani version of sambar, using Shilpa's authentic recipe for Kolmbo. My variation: I halved the amount of spices in the masala mixture to account for our rather wimpy taste buds. Even so, this was the spiciest sambar I have ever tasted- very flavorful and delicious.

Idea 2: Brown rice khichdi. I had all kinds of pre-conceived notions that khichdi, my favorite food, should not be messed around with. Then I saw Musical's recipe for Mothaan di Khichdi and it called for my beloved matki/ moth beans and, surprise, brown rice! I made it the very day she posted it, and followed the recipe directions religiously. With a dollop of tangy mango pickle, this meal was nothing short of *divine*. 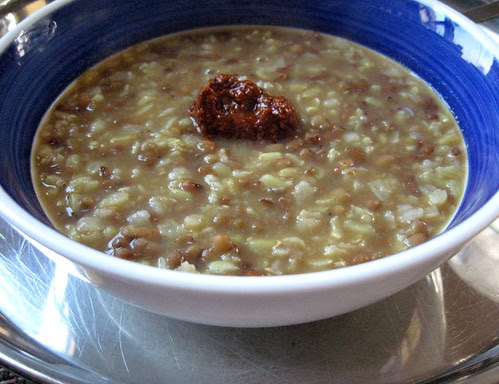 Last night, I made a variation of it: Using 2 C of mixed sprouts (matki, moong, masoor) instead of the half C of matki. I cooked the rice together with the sprouts...sprouts cook very quickly and do not require the pre-cooking. This version was as delicious as the original. What a simple and fantastic recipe! Serve it with any stir-fried vegetable (subzi/ bhaaji) for a complete and utterly satisfying meal.

Idea 3: Pairing brown rice with a spicy curry or stew. You need something robust and full-bodied to match the nutty flavor of brown rice, and rajma (a traditional Punjabi kidney bean stew) is the perfect example! I am happy to inform you that I have found THE rajma recipe that I have been seeking for years (the essay on the post is such a fantastic read; the author of the blog is a well-known writer in Bombay). The combination of rajma with plain boiled brown rice was such a treat. I cook my brown rice on the stove-top [1 C rice (soaked 15 minutes, then drained) : 2 C water]. For more tips on cooking plain brown rice, see this DH post. 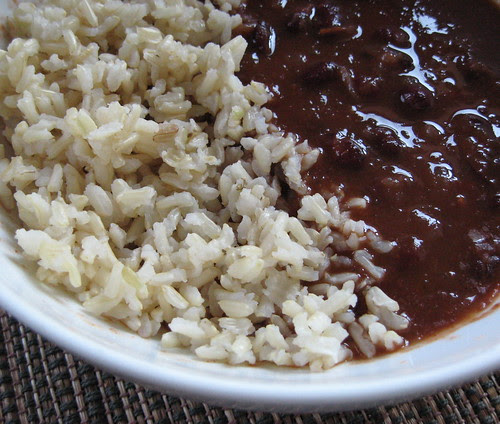 The rajma recipe calls for all of 6 ingredients and turns out something soooo delicious. I think this is a wonderful recipe for anyone who is new to Indian cooking and intimidated by long ingredient lists. This recipe calls for kidney beans, onion, tomato, salt, oil/ghee (butter could be substituted) and red chili powder (cayenne pepper). These are very common ingredients in most pantries. Dare I say it...one could make a version of this with canned beans in a pinch. My variation: I did soak the rajma for a few hours and rinsed it thoroughly before pressure-cooking it. Otherwise, I stuck to the recipe religiously. I did not even "speak while eating"!

Finally, while we are on the subject of "brown", here is some dessert! I wanted to bake something sweet for my parents when they were visiting, and what could be more American than brownies? Via Trupti's MBP post, I found this recipe for Low-Fat Brownies that I liked at first sight. Applesauce is used to add moisture while cutting down on the fat and it calls for a great deal of cocoa powder, making the resulting brownies very chocolate-y indeed. With only half a cup of sugar, these brownies are not very sweet at all- just the way I like my "sweets"! My variations: (a) I used only 1 tsp vanilla extract (b) added 1 tsp instant coffee to the dry ingredients (c) added half cup toasted chopped walnuts to the batter. We loved the taste of these low-fat treats just by themselves, but on that day, I served them with vanilla ice cream, garnished with some apple roses. 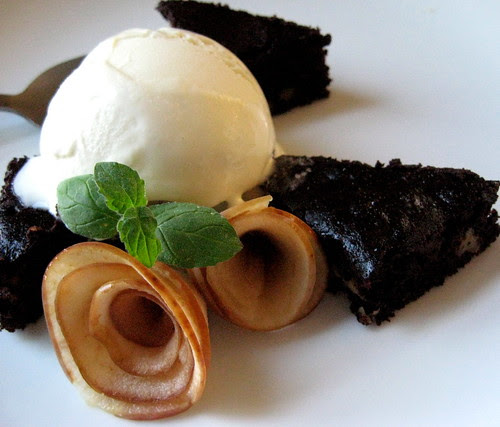 I've made these brownies a couple of times since then, and everyone likes them. This recipe goes straight into my folder of "keeper recipes".

Idea 4: Oven-Baked Brown Rice For anyone struggling to make brown rice on the stove-top, Alanna shares a fool-proof method from Cook's Illustrated Magazine. Her Oven-Baked Brown Rice was very easy to make, and turned out just perfect: every grain of rice fluffy and perfectly cooked! It is nice to make a big batch of brown rice and use it over 2-3 days (it re-heats perfectly in the microwave). 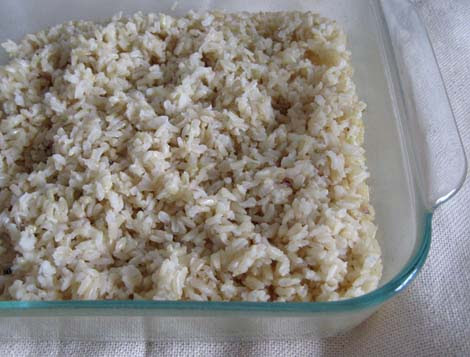 Idea 5: Fried Rice Any left-over cooked brown rice can be easily used to make a "fried" rice with vegetables like onions, peppers, mushrooms, carrots, cabbage, green onions (any combination of these). See an example here. 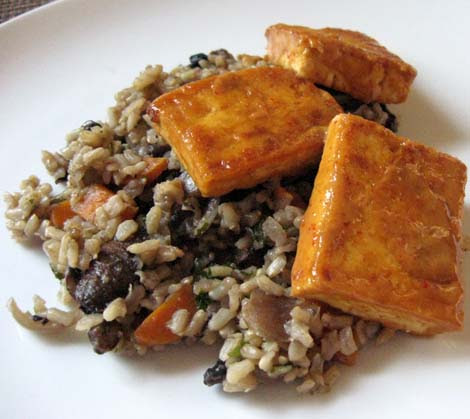