Eating Out while Eating In: Vegetable-Paneer Korma and Naan

Lakshmi of Veggie Cuisine has come up with a new event that is close to my heart: Regional Cuisines of India or RCI. Each month, we will be cooking up specialties of one region/ state of India. This month, the RCI event is being hosted by Richa of As Dear As Salt. The theme is Punjabi Cuisine, i.e., the cuisine of the Northern state of Punjab.

Punjabi cuisine: if ever there was a regional cuisine that has found iconic success, this is it. In Indian restaurants in all the far-flung regions of this planet, whether they are fancy-schmancy ones or pokey holes-in-the-wall, Punjabi cuisine is ubiquitous. People who know absolutely nothing about India will nevertheless be familiar with aloo gobi and saag paneer. In the 80s and 90s in places where I lived, when families went out to eat, it was almost always to restaurants serving Punjabi cuisine. It was also the cuisine of choice for celebratory dinners, such as birthday and wedding buffets. It is hardly surprising that I associate Punjabi food with good times, and crave it every so often.

Despite the ubiquitous presence of restaurants serving Punjabi food, it is quite a challenge to find a place which does a good job with it. Tired of eating lurid orange curries that are too greasy and salty, and with slim pickings of paneer and vegetables, I decided to try making something at home that satisfies my longing for restaurant style Punjabi food. This stuff should not be confused with real Punjabi home-style cuisine, which I'm only just starting to learn about. It is just my recreation of that lovely rich taste of restaurant curries that I remember from "eating out" over the years. Health food it is not, but I promise you: this dish is a lot more wholesome than anything you would find in the India Palaces and Curry Houses of this world.

I am giving this rather generic curry a suitably non-specific name: I'm just going to call it a korma for lack for a better term. The stars of this dish are paneer cubes and juicy vegetables. Here, I used onion, green pepper, tomatoes, peas and carrots. Sweet red, yellow and orange peppers are also wonderful in here. The curry base is made with tomato puree, along with a cashew- poppy seed powder that adds the requisite thickness, richness and flavor, turmeric adds a subtle flavor and a lovely hue and red chili powder throws in a fiery kick. A generous pinch of kasuri methi (dried fenugreek) lends an indescribable flavor which does much to spike up the "restaurant taste". This dish would be incomplete without the use of the aromatic spice mixture known as garam masala. Here, I use my mom's magic masala, a blend of equal parts of cinnamom, cardamom and cloves, and nothing else. It is heady stuff. In most recipes, cashews and poppy seeds are ground into a paste for such curries, but in my food processor, this never works well. Instead, I make a powder in a spice grinder, which works beautifully. 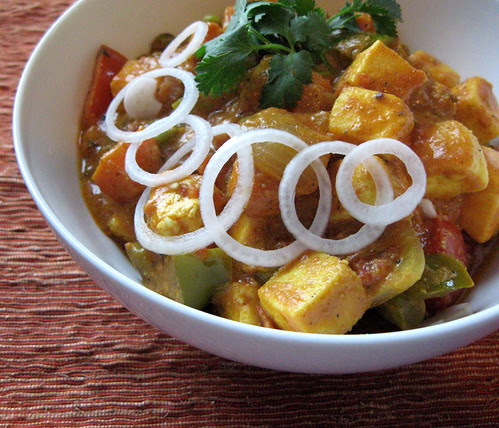 Method:
Garnish with a dollop of cream and some minced cilantro, if desired. Serve with sliced onions and lemons on the side.

To soak up with flavorful korma, this is my first attempt at home-made naan. I shied away from making naan for two reasons: one is that naan uses all-purpose flour, something that I'm trying to avoid eating a lot of, for nutritional reasons. The second is that the really awesome naan requires a super-hot tandoor oven. I had my doubts about using the oven at home.

But I've seen lots of gorgeous naans in the food blog world in the past several months. The ultimate temptation was this olive-onion naan from the Cooker, using this recipe from Evil Jungle Prince. To simulate the high heat of the tandoor, a pizza stone is used. A pizza stone is nothing but a flat piece of stone or ceramic. It makes beautiful crisp pizza crusts by (a) absorbing the moisture from the dough and (b) retaining a very high temperature and creating a very hot surface to bake on. I own an inexpensive pizza stone that is a permanent resident of my oven. I just leave it in there even when the oven is being used for other purposes (it makes no difference to the stone, and take care of the problem of storing such a large and heavy object in a small kitchen), and use it every few days for home-made pizzas.

I also liked the Cooker's idea of using white whole wheat flour to make the naans. This recently-developed flour has more of the pale look and the mild taste of all-purpose flour, but has the nutritional profile of whole wheat flour. Just what I was looking for! I believe traditional naan is simply kneaded with yeast and allowed to rise naturally, but here, some baker's yeast is added to speed the process along.


Naan
(makes 5 naans, inspired by these recipes)
1. In a small bowl, mix 1/4 cup warm water, 1/2 tsp honey and 1 tsp active dry yeast. Set aside for 5-10 minutes, until the yeast is activated and bubbly.
2. In a food processor bowl fitted with the dough blade, place 2 cups white whole wheat flour, 3/4 cup low-fat yogurt, 1/2 tsp salt, 1/2 tsp sugar, 1 tsp melted ghee. Pulse until well-combined. Process, adding a few drizzles of water as required, so that the dough comes together in a slightly sticky ball.
3. Place the dough in an oiled bowl, cover loosely with a damp kitchen towel and let it rise for a couple of hours, until doubled in size.
4. Pre-heat oven to 450 F, with pizza stone inside, for at least 30-40 minutes, to allow the pizza stone to get fully heated.
5. With oiled hands, divide the naan dough into 5 portions. Flatten each one into a roughly triangular shape. Sprinkle with your favorite toppings: I used black poppy seeds, onion rings and a sprig of cilantro. Drizzle with a few drops of ghee or melted butter. 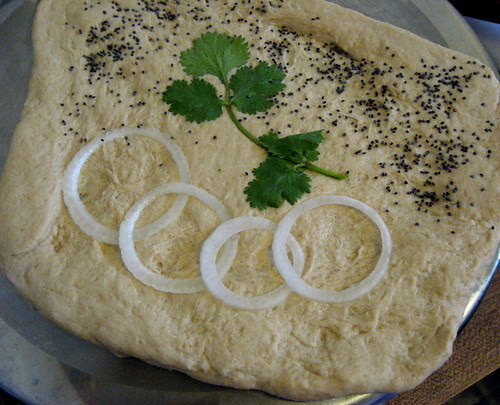 6. Place on the hot pizza stone and bake for 10-12 minutes or until cooked through and starting to brown. I found that the baked naans could be lifted off the pizza stone quite easily with tongs, even without sprinkling the pizza stone with any flour or cornmeal beforehand. Serve the hot naan right away. 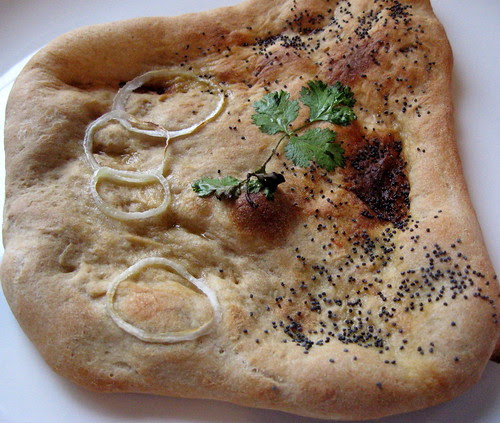 The combination of home-made korma and naan was quite a treat! 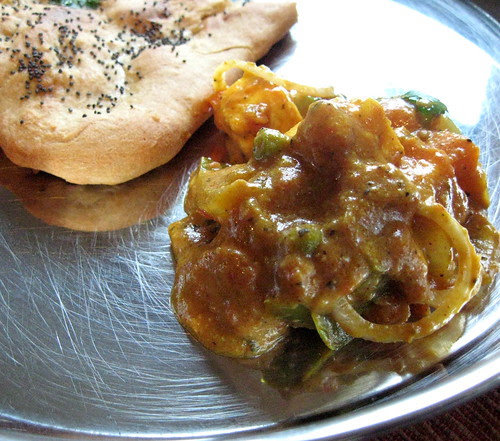 The naan tasted so wonderful...I am going to be making it quite often. It is much easier than rolling out rotis!

The korma lends itself to lots of variations. These days, I often make an All-Vegetable/ Vegan version by skipping the paneer and using mixed vegetables instead. My favorite combination, with Red and Yellow Peppers, chunks of sweet Carrots and lots of succulent Mushrooms, made more "saucy" than the paneer version above. These vegetables all have a sweet and juicy profile and they go together very well. The picture shows what I do with the leftover korma when all the naans are gone and there is no rice left- sop it up with some crusty bread! 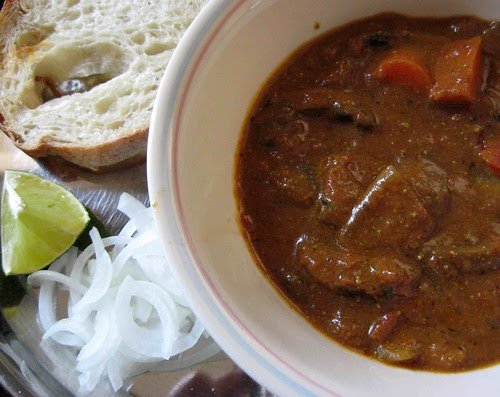 Other Punjabi-inspired dishes I have posted before:
Gobi Paratha
Aloo Gobi
Paneer Pilaf