N is for Nargisi Kebab

Welcome to the second half of our alphabetical journey...

The "N" of Indian Vegetables

The letter N inspired fourteen novel Indian flavors! Truly, the entries in this round-up are extra-creative, no two are alike, with bloggers making the most of a pretty challenging letter...

Let's start with an N flower...the Neem Flower. The neem tree is a beautiful evergreen with great medicinal value and a plethora of uses. But I had no idea about the culinary use of the neem flower! Suganya of Tasty Palettes shows us how sun-dried neem flowers can be used to make a flavorful Neem Flower Rasam. Suganya is a new blogger, and looking at her beautiful posts and pictures, I am looking forward to more of her posts!

The two N vegetables are rather unusual ones.

First up, we have the lotus root, known in Hindi as Nadur or nadru. An uncommonly beautiful vegetable (I think of it as Nature's artistic cutwork), the nadur is used extensively in some Northern regions of India, but is a completely new vegetable to me. Bee and Jai of Jugalbandi share a traditional way of making the lotus root, a delicate yogurt-based preparation called Nadur Yakhni.

The second N vegetable is Nuggekayi, the Kannada (language of Karnataka) word for drumsticks. Suma of Veggie Platter uses these slender, tapering and tender green pods to make a simple and delicious curry called Nuggekayi Palya.

Next come a big bowl of N fruits...

The Nariyal or coconut is so much more than a mere fruit! Coconuts have religious significance in Hinduism, are widely grown in coastal India, and are the superstars of Southern Indian cuisine. It would take me years to list the delicious (sweet and savory) recipes in which the coconut is used. Here, the nariyal is richly represented with a very traditional preparation. Reena of Spices of Kerala uses the coconut to make Aviyal, one of the most well-known and well-loved dishes from Kerala, and also shares two lovely tales about the origin of this wonderful dish.

Next, we have two citrus fruits.

Nimbu or lemon/lime, is on the weekly shopping list of most Indian households. The tangy and fresh flavor of lemon adds zing to so many dishes. Here, Asha of Aroma/Foodie's Hope lets the lemon take center stage with her unusual recipe for some tasty Nimbu Masala.

Navel Oranges represent our longing for the sunny days of summer. Sreelu of Sreelu's Tasty Travels shares some cool-looking, dreamily creamy Navel Orange Ice Cream Cups that are sure to be a hit at your next summer soiree!

...and two rather unusual fruits, both shared by A Cook of Live to Cook. Naraththai is a Tamil word for a type of sour orange and it is added to dough and made into bright orange, beautiful Naraththai Puris. Nellimulli is Tamil for dried gooseberry, and is blended into a delicious relish called Nellimulli Pachidi.

Then, we have one N bean: the Navy Bean, a small white bean that is the traditionally the most popular bean of England and North America. Anglo-American they may be, but here, navy beans get the traditional Palakkad treatment when Sheela of Delectable Victuals flavors them with an aromatic spice mixture to make Navy Beans Paduthoval.

Coming up next, a N cereal, the pearly grains of the finger millet, known in Hindi as ragi and Marathi as Nachni. This cereal is a wonderful example of an unglamorous food that nonetheless provides inexpensive and invaluable nutrition to millions of people in Asia and Africa. Mahek of Mahek's Kitchen shows us how we can include nachni in our everyday cooking with her recipe for a soft and wholesome Nachni Roti.

The next food is a perennially popular one: Noodles! It would not be an exaggeration to say that Maggi Noodles occupy a special place in the heart of a lot of kids who grew up in urban India (certainly me!). Tee of Bhaatukli uses instant noodles in a very creative way when she tosses together fried noodles, sauteed vegetables and bean sprouts to make a tasty Noodle Bhel.

Then comes that important N quality that we are always seeking in our food...Nutritious! Aarti of Aarti's Corner gives us a recipe for sneaking in veggies and grains into our diet in a delicious way. She combines assorted flours, grated bottle gourd and a selection of spices, and then rolls our some piping hot Nutritious Doodhi Parathas.

And now, for the first time in this series, N destinations! So, let's pack our bags and hop on a plane to Southern India.

Our first stop is Nagapattinam, a small and picturesque district in Tamil Nadu with a beautiful coastline. Read about it here. Swapna of Swad uses an authentic Tamil cookbook to make some Nagapatinam Patani, a simple yet delicious stir-fry of green peas.

Ayesha of Experimenting on Taste Buds then takes us further on our N journey, going from the sandy coast to the lush and imposing Nilgiri hills. Ayesha gives us a taste of the cuisine from this region with two festive recipes for Nilgiri Korma and Nilgiri Curry.

The final entry of the round-up is probably the most unexpected...where N stands for Nylon! What could a synthetic polymer have to do with food, you ask? I'm going to let Richa of As Dear As Salt explain that to you, as she tells us how to make an Nylon Khaman Dhokla Sandwich that is not only edible, but completely delicious.

Forget the boxed mac-and-cheese, and the heat-and-eat soup. In my opinion, the greatest convenience food in my kitchen is that little cardboard box in the fridge, containing a dozen brown eggs! Now, one definitely does not *have* to eat eggs in order to have a nutritious and balanced diet, but for those of us who do choose to eat eggs, they provide an easy and inexpensive way to include quality protein in our diet. Eggs take up a lot of "culinary space", with hundreds of recipes and variations thereof. They can be boiled and fried, poached and coddled, and they certainly find their ways into sweet treats like cakes and custards.

In this series, I knew that I wanted to show-case eggs in one of the posts, and today, eggs form a pair with potatoes in some Nargisi Kebabs. Now, a kebab is a kebab, but who is Nargis? Well, it is a woman's name, and perhaps the most famous "Nargis" in the world is this beautiful actress. So, in the tradition of Caesar Salad, Fettucini Alfredo and the Elvis Sandwich, this is a food named after a person. I found a recipe for Nargisi Kebab in an old tattered cookbook, and it consisted of hard-boiled eggs wrapped in some spiced minced meat. Well, here I am using my "culinary license" and making up a recipe for something that I will insist on calling Nargisi kebab.

In this recipe, hard-boiled eggs are halved, and the halves are swaddled with a fresh green chutney in a soft potato dough, then dipped in an egg wash and fried to a golden-brown. Want to learn how to make the perfect hard-boiled eggs? See these helpful primers by Kalyn, Alanna and Cate. Want some tips on choosing eggs in the supermarket? See this post. 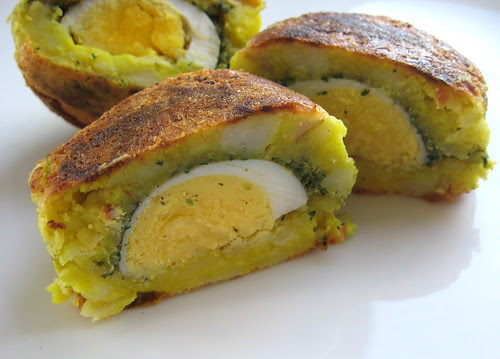 (P.S.: This is the first picture on the blog taken with my brand new camera...a thoughtful birthday gift from V last week. I'm looking forward to figuring out the features on this new toy (which is quite a bit fancier than the 6-yr-old point and shoot that I have been using all along). What can I say, I am a lucky, lucky girl! Er, and this recipe makes 8 BIG kebabs.)

1. Make the potato dough: Boil 5 medium potatoes until tender, then peel and mash the potatoes with 1/2 tsp turmeric, 1 tsp ginger-garlic paste and salt to taste. Knead the mixture into a lump-free dough and set aside.
2. Boil eggs: Make 4 hard-boiled eggs. Cut them into halves lengthwise. Sprinkle with salt and pepper.
3. Make the chutney: Grind together 1 packed cup cilantro, 1 tsp dried mint (can use fresh), 2 fresh green chilies, 2 tbsp onions, pinch of sugar, 1 tsp lemon juice and salt to taste, all into a thick green chutney. I like adding one tablespoon of nuts or beans while grinding to help get a smooth consistency without too much water (this time I added some canned cannelini beans because I had some on hand). You want to avoid a watery chutney here since it needs to be filled into the kebabs.
4. Assemble and Cook: Divide the dough into eight equal portions. To make a kebab: take one portion of dough and divide it in two. Pat each half down in the palm of your hand. Place 1 tsp chutney in one flat half, place the egg half on it, then cover with the other portion of the flat dough and seal the seams to make a kebab. If some filling leaks out, don't worry about it. This part is a little tricky and may need some patience and a bit of experience to get it right. Beat an egg into a shallow bowl. Dip each kebab in the beaten egg, then shallow-fry, turning until it is golden-brown on all sides. Serve with any chutney that is left over, or even with a dollop of ketchup.

How do you serve this dish?
1. Cut into neat quarters and serve as an appetizer. The kebabs can be assembled several hours ahead of time and refrigerated. At the last minute, just dip them in egg and fry them.
2. Serve a couple of kebabs as a light lunch.
3. Stuff inside a roll for an unusual sandwich.
4. Pack into lunch boxes and picnic hampers.

Variations on a theme
Use your favorite chutney recipe in this kebab. You could even use a pesto- like the traditional basil pesto, or a sun-dried tomato pesto.

Fellow bloggers have come up with many savory recipes combining vegetables and eggs. Here are some of my favorite finds:

A potpourri of creations...
Paratha Frittata from Mahanandi,
Scrambled Egg in Coriander Curry from Aayi's Recipes,
Egg Thoran with Tomatillo from My Treasure...My Pleasure.