Alanna is challenging us to try some new vegetables all this month with her Vegetable Contest, so here are my attempts to try some vegetables that are new to my kitchen.

When it comes to buying pantry staples like onions and potatoes, I blindly grab the first ones I can find and walk right on. So I have to give credit where credit is due: V made me buy these potatoes last time we were out grocery shopping- cute little purple potatoes. Once we got them home, I was rather excited to use them. You would think the odd color has been specially bred into the potato for novelty value. But no, this is no new potato on the block. V informed me that purple potatoes were the first potatoes ever cultivated, in Peru, and from there, they have grown and spread and become one of the world's most popular vegetables (certainly the most popular vegetable in the US). Well, after realizing that these little purple beauties are the forefathers of our white and yellow and red potatoes, I suddenly had a new-found respect for them!

On a more practical note, purple potatoes get their color from the plant pigments called anthocyanins. These pigment function as antioxidants (which perform protective functions in our cells), and that is why we are always being told to eat brightly colored vegetables. Unlike red potatoes, which are only red on the outside, purple potatoes are purple inside and out. The dull purple peel gives way to a beautiful, jewel-like purple interior. They can be used anywhere you would normally use potatoes, and end up giving the dish an interesting and unusual look. Read more about them here. I used them in two dishes, one was an experimental version of poha and the other was the popular street food sev-puri. 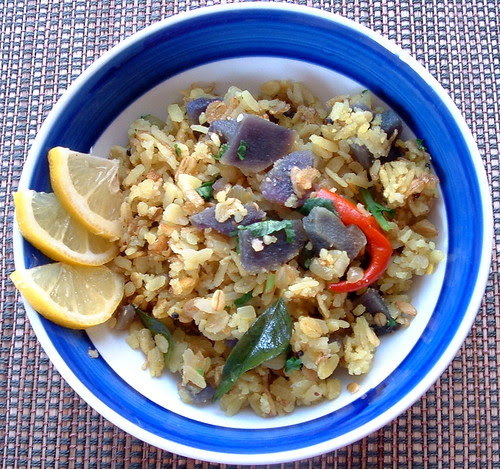 Poha is a pantry staple in many Indian kitchens. It is nothing but white rice that is par-boiled, then flattened into flakes. Because it is par-boiled, poha cooks up quickly and is most often used in two dishes. One is a dry, trail mix-like snack called chivda- see recipes here, here and here; and the other is a cooked breakfast dish often called simply poha- see recipes here, here and here.

This poha was experimental for two reasons:
1. I used purple potatoes instead of the usual ones.
2. I used a mixture of regular poha and flakes of multigrain cereal instead of the poha alone.

It started when I bought a box of County Choice Organic Hot Multigrain Cereal as an variation to my usual oatmeal. This cereal is nothing but flakes of whole wheat, rye, oat and barley mixed together. When I tasted the cereal, I thought it was delicious, and not as gummy or mushy as oatmeal often is. In short, it might work in a dish such as poha. Pictured: regular poha on the left, multi-grain cereal flakes on the right.

Method:
(serves 4-5)
1. Mix 1 cup multi-grain cereal and 1 and 1/2 cups poha in a large bowl. Add warm water slowly and mix into the poha mixture such that all the flakes get moistened well (don't immerse it in water, however). Cover the bowl and set aside for 10-15 minutes.
2. Do the other prep: dice one medium onion, dice one medium/ two small potatoes, finely chop 1-2 fresh chilies, mince a few stalks of cilantro.
3. Heat 1 tbsp oil in a saucepan. Make the tempering: 1 tsp mustard seeds, 1 tsp cumin seeds, pinch of asafoetida.
4. Add onion, chilies and 8-10 curry leaves and saute until onion is translucent but not browned.
5. Stir in potatoes, 1/3 cup green peas (frozen works great) and 1/2 tsp turmeric. Add a few tablespoons of water and let the potatoes cook, covered, until just tender.
6. To the soaked poha mixture, add 2 tsp sugar and salt to taste. Mix well, then add the mixture to the pan and stir well. Add a few tablespoons of water to generate steam. Cover and cook on low heat for 8-10 minutes or until cereal/ poha is cooked.
7. Turn off the heat. Stir in 2 tbsp fresh lemon juice. Garnish with cilantro and serve hot, sprinkled with some crunchy roasted peanuts, if desired.

Verdict: Poha is such a beloved dish of mine that I was loathe to experiment with it. But I'm glad I did! The whole grains added great flavor and texture to the dish, and made the poha more filling, so you can get away with a smaller portion size. The purple potatoes made the dish look more colorful and fun to eat, and tasted just like regular potatoes.
Two other healthier versions of poha here and here.

Now, scooting over from a healthy breakfast to a guilty-pleasure snack... 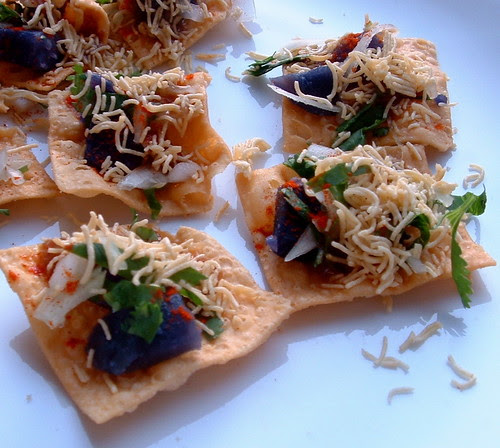 I had not tasted sev puri for years, because fresh and good puris are not easy to find, and I'm too lazy to fry them myself. Last week, I came across a new product at Trader Joe's: Wonton chips. Basically, they are pieces of wonton wrappers, deep-fried, making them practically the same thing as the puris for sev puri. I used these chips to make sev puri, topped with everything I have written above, with some boiled, peeled, diced purple potatoes instead of regular ones. I can't tell you how authentic and delicious they tasted! The purple potatoes made the sev puris look quite cute, and the wonton chips are a perfect substitute for real, live puris. If there are no Trader Joe's stores where you live, you might want to try using these newly-launched chips. I'm betting they are also quite similar to the puris for sev puri.

After all this purple goodness, I'll see you in a couple of days with something green! Bye for now!