J is for Jalfrezi Vegetables

The "J" of Indian Vegetables

I have been feeling utterly miserable all week! A respiratory double-whammy of a cold plus seasonal allergies has left me a sniveling, slobbering mess, rubbing my poor itchy eyes until I am exhausted. Needless to say, blogging took a back seat all week, but here I am with the Sunday round-up.

Before we get started, two things I wanted to share:
1. The thieves are at it again! A picture from my blog has been stolen by Foodmall and placed on this post. I don't even like that particular picture; but it is mine, and I fume when I see it stolen. Stop the plagiarism, Esther Bardhan in particular and Foodmall in general! A *huge* thank-you to Manisha for bringing it to my attention and writing a comment on the post.

2. On a *much* happier note, I got an e-mail from Swapna S. of Swad, saying that she has designed a button for the A to Z of Indian Vegetables! YAY! You can see it at the top of the post. Please feel free to use the button for entries for this event, if you like! Thanks, Swapna, that was a very sweet thing to do and you brightened my day during a stressful week :)

Let's start with something hot and spicy: the Jalapeno Pepper, of course! A popular Mexican pepper in the US, it reminds Indians of the mirchis from home. Happily, jalapeno peppers are often mild enough to be used as a vegetable, and we have three spicy recipes using them.

First up, Sreelu of Sreelu's Tasty Travels makes the "perfect fusion food" by dipping canned jalapenos into a spicy batter and frying up some absolutely appetizing Jalapeno Bajjis.

Next, Asha of Aroma/Foodie's Hope gets inspired by her grandmother's green chilli chutney and blends jalapenos, garlic and tamarind into a thick and delicious Jalapeno Chutney.

The third jalapeno recipe is a saucy one! Suma of Veggie Platter makes her very own version of the classic Hyderabadi mirchi ka salan by cooking jalapeno peppers in a rich sauce of peanuts, sesame seeds and coconuts, resulting in a delicious Jalapeno Peppers Curry.

This vegetable is a dark purple beauty: the Japanese Eggplant. Strips of baked eggplant are wrapped around a spicy herb-potato filling and topped with tangy goat cheese, resulting in these awesome Japanese Eggplant Rolls by Sushma of Sunkiran's Recipe Source. What a unique flavor profile!

The next vegetable is a tropical fruit with a distinct and quite indescribable flavor: the Jackfruit. As with many other fruits and vegetables, every part of the jackfruit is enjoyed, even the jackfruit seeds. These large seeds are cooked into a delicious Jackfruit Seeds Dal by Mahek of Love For Cooking.

The next J food is not a vegetable, but a cereal: Jowar, known in English as sorghum. The pearly white grains of sorghum grow well even in regions that are quite dry, and this tasty grain is especially popular in rural India. We have two delicious pancakes made with the jowar flour.

Mahek of Love For Cooking makes a batter with jowar flour, spices and spinach and uses it to make quick pancakes or Jowariche Thalipeth that look golden and oh-so-inviting.

Prajakta of Swaypakghar introduces the traditional jowar bread- jowar bhakri in Marathi- and then makes her own easier version of this bread. She kneads jowar flour, spices and veggies into a smooth dough and rolls it out into some utterly delicious Jwariche Dhapate.

The next J word is another one that works magic for the busy cook: jhatpat, the lovely Hindi word that means quick or in a jiffy! Mandira of Ahaar combines tofu and vegetables in a Jhatpat Sabzi that is also swadisht (delicious) and paushtik (nutritious).

Javvarisi is the Tamil word for my beloved sabudana or sago, pearls of tapioca. In this entry, sago teams with a vegetable medley and is cooked into an unusual and delicious Javvarisi Upma by Sheela of Delectable Victuals.

Jahni is the Oriya (language of Orissa, an Eastern state of India) word for one of my favorite vegetables, the ridge groud. Ridge gourd and potato are cooked with a garlicky poppy seed paste into a flavorful Jahni Alu Posta by Bee and Jai of Jugalbandi.

J also stands for Jalfrezi, a method for stir-frying! This turned out to the most popular entry, and we have four variations of vegetable curries cooked in this style (including my own)...

First up, Swapna of Swad makes a classic version of Jalfrezi Paneer by combining cubes of paneer and vegetables in a festive curry.

Next, Richa of As Dear As Salt makes her own version of Jalfrezie using a colorful medley of vegetables, garnished with some paneer.

Then, Manasi of A Cook At Heart shares a version called Jalfry that she learnt in a Punjabi cooking class, no less!

Read the menu from any Indian restaurant, from Delhi to Durban to Detroit, and chances are good that you will wonder if they are franchises of a chain. They will likely feature the same vegetable curries and the same rice preparations. Indian restaurant food tends to be a little one-dimensional, featuring so-called Punjabi cuisine (inspired by Punjabi dishes, but having lost all resemblance to Punjabi home cooking), but with a over-generous use of fats and spices, so that everything on your plate tends to look like an oil slick. The truth is, Indian cuisine *is* coming into its own on the global arena, and in many cities around the world, you will see South Indian restaurants, and some Gujarati thali places, and so on.

Having said that, I ate quite a bit of typical Indian restaurant food growing up, and from time to time, I utterly crave it! Those curries are featured on thousands of restaurant menus for a reason- they are tasty, and crowd-pleasing! These are the foods that people remember and long for, and if you manage to make a dish taste as good as a restaurant can, you will be a hero!

I have been trying to incorporate all my favorite restaurant-style dishes into my cooking repertoire gradually. I love it when I manage to "nail" the taste of a restaurant dish, and I know that I use much less oil and much more vegetables than the "real thing". One of those dishes that I have never seen as part of any home cuisine, but is sure to be featured in restaurant menus, is Vegetable Jalfrezi. The origins of this dish are murky, but it seems that jalfrezi is a method of cooking rather than the name of a particular dish. It translates as hot stir-fry and is probably derived from the Mughal style of cooking.

I like vegetable jalfrezi because unlike most other restaurant-style curries, it is rather dry, with the vegetables crunchy and tender rather than over-cooked and drowning in a sauce. I adapted my version from the very same recipe that Swapna has posted. I had no paneer on hand, so I used more vegetables instead. To my mind, restaurant-style jalfrezi always has vegetables that are prepped into long cuts, like matchsticks and juliennes. I also remember jalfrezi as being sweet and sour and spicy, and added some pineapple cubes for the extra sweetness. The addition of pineapple cubes to different curries is another Indian-restaurant trick! As a child, I adored the pineapple and would root around to find all the cubes in the serving dish. On to the recipe... 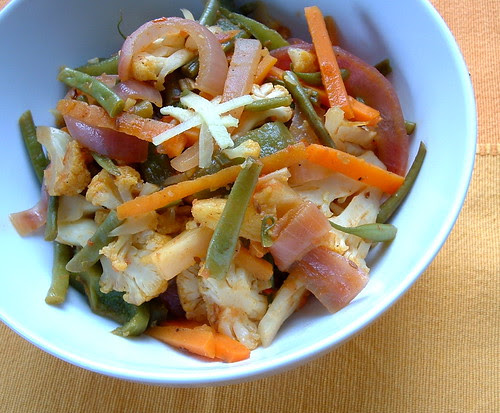 Variations on a theme
Add some crispy fried cubes of tofu or paneer for a more festive and protein-rich version.

How do you serve this dish?
This dish can be served as part of a North Indian buffet or a home-made restaurant style meal with other North-Indian dishes. Serve with with steamed Basmati rice, or with flat-breads like naan or paratha.

Fellow bloggers have come up with many delicious home-cooked versions of vegetable dishes that are restaurant favorites. Here are some of my favorite finds:
Mattar Paneer from My Dhaba,
Mushroom Masala from Recipe Junction,
Bhindi Masala from Saffron Trail,
Methi Matar Malai from Keep Trying,
Palak Paneer from My Treasure...My Pleasure,
Aloo Chole from Mahanandi.

We have family visiting us next week, so I don't think I will be able to post much during that time. I shall see you next Sunday for the K of Indian Vegetables. Looking forward to all sorts of delicious K entries (finally, a pretty easy letter!) and please feel free to use the lovely button that Swapna designed!
Posted by Nupur at 7:01 AM