N is for NAARAL WADI

N is for Naaral Wadi.

N does not stand for many Marathi foods. But that is totally compensated for by the one food that it DOES stand for : the naaral or coconut. The importance of the coconut tree to human life and culture in the coastal areas of India cannot be overstated. Every single part of the coconut tree is used, for food, clothing and to earn a livelihood: The tall trunk of the tree is used for carving out boats, the husk of the coconut is used as fuel, coconut oil is used as cooking oil and to make products such as soap, the tough coconut shell can be carved into many useful and decorative items. Here is a coconut shell cleverly crafted into a beautiful ladle, it was a gift from my darling friend M. 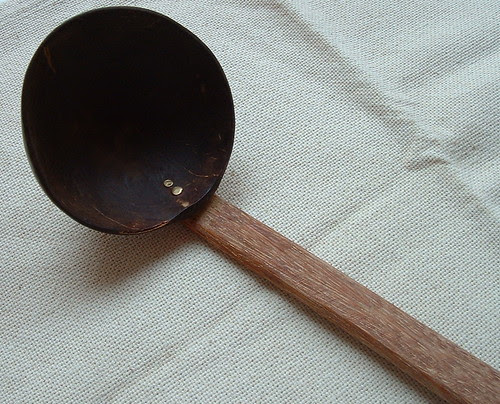 The coconut also has a very important role in religious rituals; a coconut is cracked open at every important occasion as an offering to the gods (an act reminiscent of the animal sacrifices of ages past).
But coming back to food, the coconut dominates the cuisine of many regions of India and is certainly well-represented in Marathi food. Tender green coconuts are sold at road-side stalls for their delicious coconut water, the most refreshing beverage in the tropical heat. At this stage the flesh of the coconut is very tender, almost transluscent, and delicious. More mature coconuts are used for cooking: the coconut is cracked open to reveal coconut water (which is quickly drained into a glass and consumed as a beverage) and a thick layer of sparkling white coconut "meat". It is the meat which is ground together to extract the coconut milk. People who have backyards often have their own coconut trees; here in the US, coconut is easily available in three main forms: as tinned coconut milk, as dry shredded coconut (available sweetened and plain) and "fresh" frozen grated coconut.
The most common uses of coconut are as a curry base, as we did when making egg rassa, and in several desserts such as narali bhaat (sweet coconut rice) and naaral wadi (coconut fudge), and the latter is what I decided to make today. The recipe is adapted from this recipe. The traditional way to make the sweet is to pour the hot fudge into a greased plate, let it cool and cut it into bite-size squares. Instead I patted it into muffin cups for a variation. I used condensed milk as I had some in the fridge, but you can totally omit it and add more sugar instead. 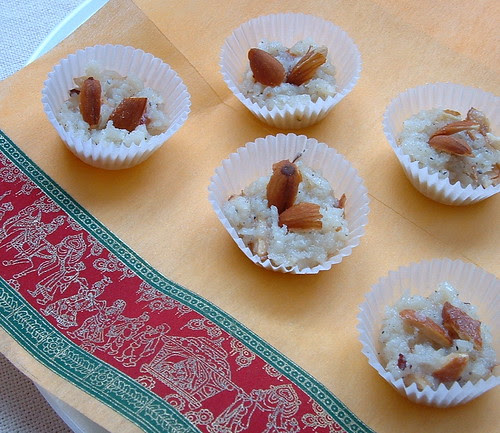 Ingredients:
1 cup frozen grated coconut, thawed in the microwave
1/2 cup milk
2 tbsp condensed milk (optional)
1/3 cup sugar
2 tbsp ghee
1 tsp cardamom powder
8-10 sliced almonds
Method:
1. Combine coconut, milk, condensed milk, sugar and ghee in a saucepan. Bring to a boil, then simmer over low heat, stirring often till the mixture gets thick and almost dry.
2. Stir in the cardamom and most of the sliced almonds, leaving a few for decoration. Turn off heat.
3. Spoon the mixture into mini muffin cups, decorating with a couple of almond slices. Let it cool. Serve at roon temperature.
This is a delicious sweet and so easy to put together! We shall meet again with a look at the letter "O".