Following closely on the heels of "L", we come to the letter "M". It starts with a trio of spices, mohri (mustard), the similar-sounding miri ( black peppercorns) and the all-important ingredient of Indian food, mirchi (chilli peppers). These are generally added in small quantities to spice up foods, but mirchi is considered an ingredient in its own right...fresh chillies are ground up with salt to give a amazingly spicy paste called mirchi cha thecha (smashed chillies). The most famous M word is, without a doubt, masala which means the dry spice mixtures and spice pastes that form an integral part of Indian cooking, but is a word also used to describe spicy gossip and all matters of a tabloid nature!
M is the word for maida (pronounced ma-ee-da) or all-purpose flour, which has many uses in the kitchen but still is not as widely used as its healthier whole-wheat cousin, luckily for us. M stands for some popular vegetables including maka or corn, mattar or peas, and methi or fenugreek, a mildly bitter and very nutritious green leafy vegetable. The most popular M lentil is moong, often used in its sprouted avatar.
One delightfully sweet M is a dumpling called modak. These sweets resemble onions in shape, round at one end and tapering at the other; and are made by stuffing a coconut mixture into dough which is then either steamed or fried. Modaks are a special treat made at the festival honoring Ganesha, the elephant-god.
I know the "M" that everyone is waiting for is misal, a delightful snack made with a base of lentil curry, then sprinkled with all kinds of fried garnishes and chutneys and eaten with bread. This street food is my favorite too, but its not what I made today (wait! hear me out!). The reason is that the base of misal is a curry called "usal" and I am saving it for the letter "U", when I will make usal and misal together. So misal is coming around in just a few weeks!
The dish I decided to make for "M" is actually influenced by the cuisine of the konkan coast. It is a curry made with sprouted whole moong. The name moogambat is a combination word of moong+ ambat (sour) indicating that it is a tangy curry. A reader has kindly corrected me by saying that, "in konkani ambat means amti", so this dish actually translates to moong amti. My apologies for this error. My paternal grandmother was konkani and hence the influence of this style of cooking. 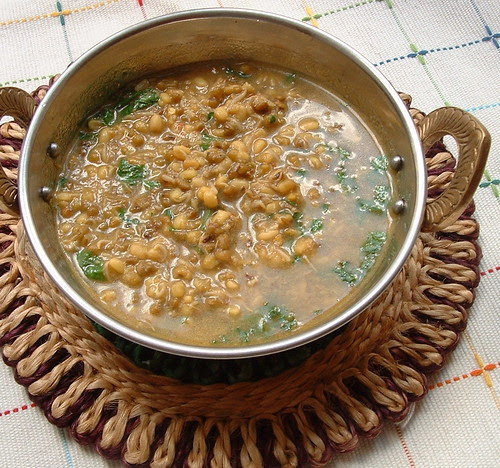 Ingredients:
3 cups sprouted moong beans (Primer for sprouting beans), cooked till tender
1 tsp cumin seeds
1 tsp mustard seeds
pinch of asafoetida
1 tbsp tamarind paste
1/2 tsp turmeric
2 tbsp oil
salt to taste
1 tbsp jaggery (brown sugar)
For the paste
1 tbsp oil
1/2 cup shredded coconut (unsweetened)
1/2 cup onion, coarsely chopped
4 dried red chillies
1 tbsp coriander seeds
Method
1. Make the paste by heating the oil in a skillet and toasting all the ingredients for the paste together. Then grind into a fine paste and set aside.
2. In a pan, heat the oil. Make a "tadka" with cumin, mustard, asafoetida. Add the cooked moong beans and the rest of the ingredients and some water if necessary and simmer the curry for 5-10 minutes. Taste for salt and the sweet-sour balance of flavors. Garnish with cilantro.
This curry could not be simpler to make. It is very tasty with some plain boiled rice. Let's meet next week with "N"!