On Christmas day 2014, Lila got a much-anticipated gift from a dear family friend, her American grandma- a DVD of the Disney movie Frozen. She watched it twice that day and has watched it almost every weekend since then. I will let you do the math. Yes, this little girl joined a substantial portion of the younger population of North America by being totally caught up with Frozen fever.

As a consequence, for eight months straight, Lila has begged us for an Elsa cake for her birthday. So when she turned four last month, at least this one aspect of the celebration was already decided on.

Lila's birthday party was a celebration at home, with 8 or so of her close friends in attendance (a few with their older and younger siblings in tow), along with their parents- so the guest list quickly grew to about 25 people. We decided on a 10 AM Saturday morning brunch birthday party, for several scheduling reasons. Around here, morning parties are not the norm but they are not unheard of either.

Incidentally, the time of the party was very appropriate because the birthday girl has been a morning person from day one. She was born in the wee hours of the morning and has committed herself to waking at the crack of dawn ever since- weekends, holidays, Mondays, you name it. We actually had to buy an alarm clock to make her stay in bed- it glows green at 5 AM and she knows that until the clock turns green, it is still night and she should try to sleep.

Anyway, back to the birthday cake. While I love baking, I am no good at decorating cakes. A friend of a friend opened a bakery in town only a couple of months ago, and I decided to outsource the cake to her expert hands. Lila specifically wanted "Elsa in blue standing on chocolate" so that's what she got: a three-layered vanilla sponge with strawberry filling and chocolate frosting, with blue candy ice crystals and Frozen figurines from Target. 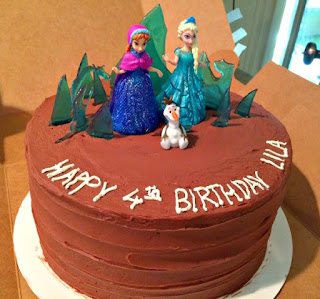 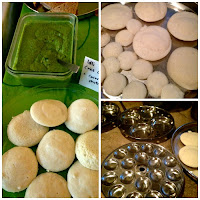 I made idlis the weekend before the party and stored them neatly in the freezer in airtight boxes. It was a good idea because I wouldn't have had the time to do the grinding and steaming on the day before and day of the party. I thawed them overnight in the fridge and reheated them in the microwave just before serving- they were good as new. We had regular idlis and mini idlis, perfect for the little ones.

The next hot dish was a hash brown breakfast casserole was straight from Alanna's recipe. I doubled the recipe to make it in a 9x13 pan. I used spinach as the optional middle layer- two boxes of frozen chopped spinach that I thawed over 2 days in the fridge and then squeezed dry. This casserole is hearty and tasty and was a huge hit.
The final hot dish was a kid favorite and requested by Lila: classic mac and cheese. I use a pretty standard recipe, much like this Martha Stewart one. I made the bechamel sauce the day before, and boiled macaroni and baked the mac and cheese on the morning of the party. 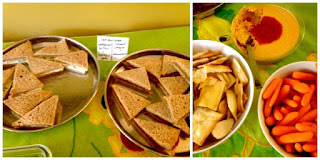 As part of the brunch spread, I made two kinds of sandwiches. One was the ever-popular PB&J except that two of the little guests were allergic to peanuts so I chose sunflower butter instead of peanut butter.
The other sandwiches were cream cheese-cucumber. Because this was a special occasion, I cut the crusts off (save them in the freezer to make breadcrumbs or use in vegetable patties) and cut them into small triangles to make two-three bite sandwiches.

Also on the table: a tub of hummus with baby carrots and pita chips. All store bought. 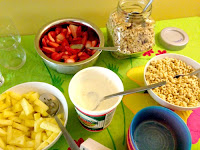 The menu worked well and everyone seemed to find something that they liked to eat. We made plenty of fresh coffee for the grown-ups. Much of the food was store-bought (yogurt, hummus, pita chips, cheerios), easy to prep (fruits, sandwiches) and easy to make ahead (idlis, mac and cheese). This was very important because Friday was a working day and the guests started pouring in quite early on Saturday so there was not a lot of prep time.


The party was noisy, chaotic and lots of fun. I wanted to organize a few party games like pinning a candle on a cupcake/passing the parcel but never got around to it, and anyway the kids were busy running around and doing their own thing. It was all over by noon, and the birthday girl went to take a nap. After cleaning up and devouring the leftovers, we had the rest of the day to relax and watch her enjoy her presents- including a book, a memory game, an art kit, a play tent. And so started the fifth year of my little girl's life, in the company of friends, family and the Elsa cake of her dreams.
Posted by Nupur at 8:03 PM