Casual Dinners and a Fabric Fest

I missed my usual post on Monday, but I didn't want to let a week go by without a fresh post. Although I'm short on time and not feeling particularly inspired this evening to do much writing, I have been cooking and sewing a great deal and couldn't resist popping in to show you what I've been up to.

Last holiday season, I was in a big baking mood and ordered specialty baking ingredients online. I almost never buy ingredients or food online so this was quite exceptional. Let's just say the King Arthur catalog sucked me in. Well, one of the things I bought was Italian-style flour- perfect, they said, for making pizzas and focaccia and such. As it often happens, special ingredients sit there waiting for a special occasion that may or may not ever arrive.

So last Sunday, on a very ordinary non-special kind of evening, when I had a friend and her little daughters coming over for a casual play date and supper, I broke into the flour and finally used some of it. But special flour called for a new recipe at the very least, so I tried this no-knead cornmeal crust from the authors of those 5 minutes a day bread books.

I made the dough in the mid-morning and it truly took about 5 minutes and minimal effort to put together. I halved the recipe for the cornmeal olive oil dough, and used 50:50 all purpose flour and that special Italian pizza flour. Making the dough meant mixing a bunch of ingredients and leaving it on the counter-top for a couple of hours, then sticking the covered bowl in the fridge. Couldn't be easier.

Then I made a simple pizza sauce with canned crushed tomatoes, some olive oil and Italian herbs and plenty of garlic, of course.

When the time came to bake the pizza, I generously buttered a large baking sheet (preferring that to a cast iron pan because I needed a large pizza for 3 adults and 3 hungry pizza-loving kids). The recipe called for rolling out the crust on the counter top and then laying it on the baking sheet. Well, that did not work for me at all. What did work was just plopping a lump of dough into the baking sheet and patting it into place.

Then I layered the toppings: going with Chicago-style pizza tradition, I first layered mozzarella cheese, then the sauce, followed by a light sprinkling of Parmesan cheese. The pizza was baked according to the recipe, then I topped it with some freshly snipped basil after it came out of the oven.

We enjoyed the pizza with a salad of spinach, red peppers and shredded carrots with a balsamic vinegar-mustard dressing. I adore the combination of pizza and this particular salad. Cornmeal is a magical ingredient in pizza crust. It truly makes the crust so tender and light. Here's a picture of leftovers that I happily devoured for lunch the next day: 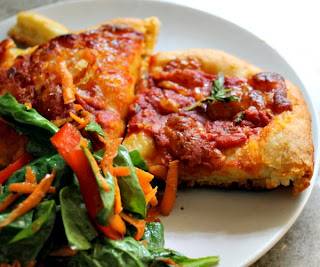 Then a couple of days ago, I was again in the mood to try a new recipe. Mind you, a new recipe but with familiar ingredients that I already had on hand. Enter this recipe for Snobby Joe's, a take on Sloppy Joe's but using lentils. Just our good old masoor/ brown lentils, but with a different flavor profile from mustard and maple syrup.

Among the many reasons lentils are wonderful is this one: they cook readily and quickly. I did soak them for a few hours which sped up the cooking even more. Then I followed the recipe, but added the lentils and some water to the sauteed onions and peppers and let it all simmer together instead of cooking the lentils separately. One less pot to wash, plus the lentils absorb flavor beautifully as they cook. I used grainy Dijon mustard instead of yellow mustard. And do note that the chili powder called for in the recipe is American chili powder which is a blend of mild chillies, garlic, salt etc. and can be found in supermarkets. If you use Indian chili powder, you won't want to use 3 tbsp as the recipe calls for!

This is one tasty recipe- I absolutely loved the way these favors worked together. I've been piling on these snobby joe's on buttered bread with a bit of cheese and melting it together into one delicious grilled sandwich. 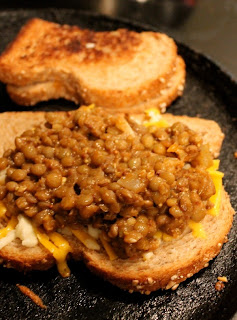 So, anyway, those are two bookmarked recipes that I'm glad I tried and that I highly recommend.

Meanwhile, my sewing has finally taken off. Now that I know how to do basic stuff like changing the bobbin, sewing is not such an uphill battle any more. I'm sewing more seams than I'm ripping apart. Of course, it is all possible because kind crafters share free patterns and advice and tutorials on their blogs and websites- I'm much obliged to them!

I got so carried away with enthusiasm one evening that I even made a pillowcase dress for Lila. The inspiration for the watermelon look came from a pic I saw online and the helpful pattern is from here. 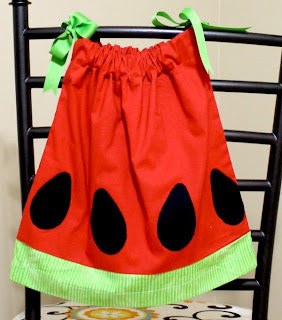 Another favorite little project from recent weeks has been this tea wallet. I've made several to give as gifts. Once I made one I just could not stop. The excellent tutorial is from here. I don't know- there's something ridiculously cute about a tiny wallet for carrying around little tea bags. And this wallet fits business cards and credit cards perfectly too.

Making the tea wallet opened up a world of projects for me because they had several steps in common. One was this crayon tote. A tote that a child can carry around to restaurants, car rides etc. and then open up to reveal crayons and coloring books. Art on the go! 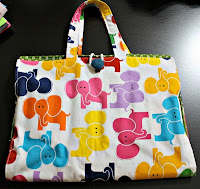 Here's another one: a car roll that opens up to reveal garages where one can tuck little cars and then when the mood strikes, zoom zoom, they can hit the build-in roads. 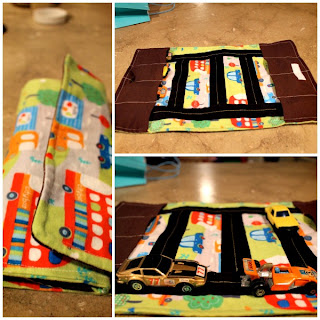 I'll be back next week with the results of my fridge and freezer cleaning. Have a great week!
Posted by Nupur at 7:34 PM