Earlier this month, the toddler population of my household doubled. The way toddler math works is that a two-fold increase in toddlers corresponds to a ten-fold increase in general chaos. So let's just say that life has been busy and crazy and very, very entertaining since we became a family of four (again).

Say hello to the newest member of the One Hot Stove family. Duncan is a 7 month old, 50 lb. Plott hound- Labrador mix. We had never heard of Plott hounds. A bit of web searching told us that yes, Duncan most certainly looks like a Plott hound. It is an American breed of hound and as it happens, the state dog of North Carolina, the next state over. Plott hounds have a brindled coat, that tiger-stripey, salt and pepper look.

Apparently, Plott hounds were bred to be bear hunting dogs. Our Duncan is a lover, not a hunter. Look at that face. I will say that he has tried to dismember a couple of Lila's stuffed animals!

When we were ready to adopt a dog, we contacted the local canine rescue group. They have a network of volunteer foster families around town. What the group does is that they visit local animal shelters- these tend to be overcrowded, underfunded and loud, stressful places. They take dogs from shelters and put them in foster homes in a caring family environment, and then find permanent families for these dogs using adoption events, social media and their website. When you apply to adopt a particular dog, you get a week's trial to see if the dog and family are happy together, and only then is the adoption finalized. This feature turned out to be very important for us because the first dog we were given a trial with was not a good fit (he was a sweetheart but there were several other issues). The second one, as it turned out, was perfect.

We had explained that we were looking for a dog with an easy-going temperament who will be loving and tolerant of a toddler's awkward hugs and unexpected ear tugs. Because you know that as much as you remind a 2 year old to be gentle-gentle, they lack impulse control and you need a calm, big-hearted dog who can take it all in stride. We said we would be just fine with an older dog and that we prefer big breeds. Then we sat back and waited to see what dog the universe would send our way.

It seems that Duncan was abandoned in a neighboring rural county when he was a young pup and was found and sent to a shelter. The adoption coordinator e-mailed us excitedly and told us she thought Duncan would be a great fit for our family, and even though he is much younger than we expected, he really is perfect and we feel so very lucky to have him. He already had been given the name Duncan in the shelter and we think it fits him so we did not change it. V briefly considered naming him "Hobbes" after the tiger in Calvin and Hobbes but nah, he's a Duncan. 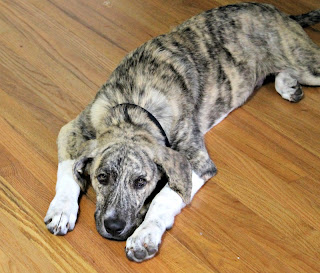 Duncan is a cuddle-bug and he has been following me around everywhere like a...well, puppy. Yes, I see now why they coined that expression. Whether I'm reading, cooking, typing or sewing, he's right there at my feet. I have a feeling you'll hear more about this pup in future posts (whether you want to or not, LOL) so let's move on to books and food now.

Last week, Duncan and I snuggled up and read a book called The Kitchen Counter Cooking School by Kathleen Flinn. With a sub-title of "How a few simple lessons transformed nine culinary novices into fearless home cooks", this book is a combination of memoir, manifesto and cookbook in the one-year-project genre which is so popular these days, but which I seem to enjoy reading about anyway.

Flinn was a new graduate of the world's most famous cooking school in Paris but found herself struggling with the question of what to do next with her culinary diploma. While out buying groceries at the supermarket, she noticed the grocery cart of the mother-daughter duo shopping alongside her, piled high with boxes and jars of frozen and dried processed food. Flinn struck up a conversation with them and came away thinking about how many people are not buying and eating whole foods because they simply lack basic kitchen skills and knowledge.

And so she gathered a group of nine volunteers, all women of different ages and ethnic and socio-economic backgrounds and spend a year giving them cooking lessons. The book is an engaging and accessible description of this year-long project. It started off with home visits to each volunteer's home, and an audit of their kitchens, pantries, refrigerators and cooking skills- she had them fix a lunch that they typically eat. Then came a year of cooking lessons and another audit a few months after the lessons ended, to see if there had been any changes in the way the participants shopped and cooked and ate. Most participants saw big changes in their lifestyles while a few remained hesitant and unwilling/unable to change.

Now, any book that it telling me about the value of cooking skills is simply preaching to the choir. But the book was an inspiring read because of the sheer variety of subjects it covers. After all, a home cook has to be a jack of all trades- with some knife skills, and some knowledge of basic dishes and how to play around to make variations of them, and there's all the mental work of menu planning around a busy schedule. Most of all, a home cook needs the self-assurance that while the food industry does everything it can to convince us that there's better living through sophisticated food chemistry, the best living for our health, taste-buds and wallets is through cooking from scratch, plain and simple.

One of the things the author mentions is what she calls "flavor profiles". It means that you can start with a basic ingredient (the one she uses is chicken breasts) and spin it in different directions by using a different combination of seasonings- soy sauce and ginger for a Japanese-inspired version, pesto and mozzarella for Italian and so on. She even has a handy cheat sheet of the flavor profiles. I found myself nodding because I certainly use these tricks to churn out distinct dishes from the same suite of ingredients that I use day after day. For instance, take beans, onions and peppers. Add cumin, oregano, adobo sauce and cilantro to make "Mexican" quesadillas. Add tadka, curry leaves and garam masala to make a dal. Toss with basil and tomato sauce to make "Italian" sauce for paste. Authentic or not, it is a simple way to make interesting meals with pantry staples day after day after day.

The most sobering chapter for me was The Secret Language of Kitchens in which Flinn made initial home visits and inspected the fridges of the project volunteers. Sobering and depressing because of the sheer scale of food waste that is described. I'll just give two examples that I read in this chapter. One participant explains that she and her husband shop in warehouse clubs where you pay less to buy large packages of foods. So it is cheaper to buy a pack of 4 romaine lettuce heads, say, even if you KNOW you can use only two and throw two away. Still cheaper than buying two at regular price. This particular person works for an aid organization helping poverty-stricken people. Cognitive dissonance, much? Another participant has so much food in her freezer that she discovers frozen meat at the bottom of the freezer, long expired, that had been bought for a camping trip three years earlier. She had simply forgotten about it. Now it all has to go in the trash. Both these attitudes bothered me more than I can say.

But we all know that even people who care very much about not wasting food can still waste food. It happens. An over-full fridge with leftovers rotting in the back. Greens bought with pious intentions that never get cooked. Exotic ingredients that you don't know how to use.

Starting tomorrow, I'm doing a small, manageable project to clean out my own kitchen and eat down the food in it. Want to join me? Check back for a fresh post tomorrow and we can work on it together.
Posted by Nupur at 10:41 AM