I have quite a long "bucket list" as far as recipes go, things that I love to eat and that I want to learn to cook properly in my lifetime. This past weekend was an unusually productive one, because I learned how to make not one, but two of them.

One of the recipes was for idli- steamed pillows of frothy lentil and rice batter. There are decent idlis, which I can make, and then there are the sort that are impossibly lightand meltingly soft- the latter always seemed elusive for me. V's aunt and uncle were visiting us for the weekend and this aunt has a reputation for being a fantastic cook. Let it never be said that I let a good opportunity be wasted- as soon as the aunt offered to cook one of her specialties for us, I requested a tutorial for idli and sambar. But that's a story for another post.

I wanted to put together a nice dinner for this aunt and uncle on Friday night and turned to a recipe that I had long bookmarked- makhani gravy from eCurry. The makhani curries are a staple of Indian restaurant menus, and for years I have wondered about the secret to nailing down that characteristic flavor and aroma. This recipe lives up to its promise; the aroma that hits you as the curry bubbles away is proof enough. I did mess with perfection and altered the recipe a little to meet my needs. And it is freezer friendly- making it easy to pull off a fancy meal on a weeknight.

To go with the curry, I marinated and broiled some paneer. I used Anita's recipe with some modifications, such as adding a little chickpea flour to form a crust. Ordinarily, I would have added a few vegetables- chunks of onion, peppers, tomato- to the tikka platter but I used paneer on its own this time because I was serving other vegetable dishes on the side. The quality of the paneer matters a great deal- we love the richness and soft texture of Nanak brand paneer from Canada. For those in St. Louis, I am able to buy this brand of paneer in Seema stores (two locations, on Page and Manchester). The paneer tikka can be marinated in a few minutes in the morning, and the broiling takes 15 minutes in the evening- again, a perfect recipe for a festive weeknight meal.


Paneer Tikka
(adapted from this recipe from Anita's blog, A Mad Tea Party) 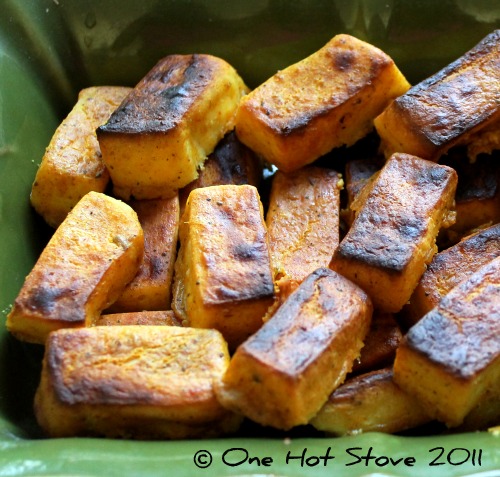 1. In a large bowl, whisk these ingredients together to make a marinade
2. Cut a 14 oz block of paneer into bite size cubes. Mix the paneer cubes with the marinade and refrigerate for 4 to 10 hours.
3. Pre-heat the broiler. Line a broiler baking tray with foil and drizzle with oil. Place the marinated cubes in a single layer on the tray, drizzle with a little more oil and broil the cubes until they acquire a nice crust (10-15 minutes; watch the broiler tray like a hawk).
Makhani Gravy
(adapted from this recipe from Soma's blog, eCurry) 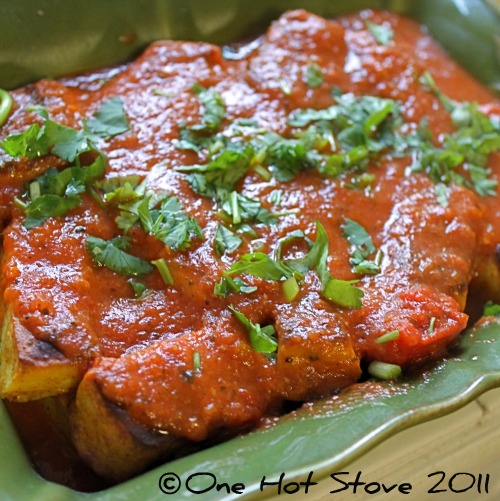 2. Add the following and saute for a minute

4. Simmer for 20 to 25 minutes on low heat; using a splatter guard is recommended.
5. Fish out the black cardamoms and discard them. Use an immersion blender to blend the tomatoes into a smooth sauce. Simmer for 10 more minutes.
6. At this point, the sauce can be cooled and frozen, or used right away.
I used half a portion for a curry and froze the rest. The frozen sauce is what I thawed and poured on the paneer tikka to make the paneer makhani. One could add some cashew paste or dairy cream to finish the dish. Garnish with lots of fresh cilantro.

So that's another edition of "Eating Out while Eating In" on One Hot Stove. The weekend is almost here and I hope you have a good one!
Posted by Nupur at 6:48 AM