The following is my first attempt at writing fiction, for the creative and unusual Of Chalks and Chopsticks event hosted this month at Bong Mom's Cookbook . Last month, I read the first round up with joy and amazement at the creativity of dozens of blogger-writers. It gave me the courage to spin my own yarn...


Mrs. Kumar and the Sweet Tooth

It might have started as a peaceful week, but today there was a great deal of excitement in the tiny town nestled among dense forests in the foothills of the Sahyadri mountains. The jewel thief had struck again. Mrs. Kumar set down her plate of Bourbon biscuits and her newspaper and joined the neighbors in the courtyard to discuss the latest developments.

For the third time this week, a home had been broken into, in the hours just after dusk. The thief was nimble and quick, climbing into windows or picking padlocks and looking for small valuables inside the homes-  silver platters used for religious ceremonies, cash from wallets and purses, gold chains, earrings and diamond rings placed on dressing tables and in drawers. So far, goods worth tens of thousands of rupees were missing representing the meager valuables of this humble middle-class community.

Distraught neighbors were standing and talking to the inspector and the constable, the two individuals that made up the sum total of police presence in that area. These two looked quite upset- here was their first chance to maintain law and order, to demonstrate their superior detection skills and they seemed to have no leads at all. Mrs. Kumar listened to the inspector explain that the thief seemed to hide out in the thick bushes behind the homes until darkness fell before attempting his break-ins. He knew this because as they looked around for clues after every robbery, they found discarded food wrappers and empty packets of chewing tobacco in the bushes behind the house that had been broken into.

Mrs. Kumar went home and made herself a cup of chai and finished the biscuits. This excitement called for additional snacks- she found a packet of chikki and started munching the sweet squares thoughtfully. She had retired a couple of years ago after decades of teaching high school science, and had shocked all her relatives and friends by buying a cottage in this tiny community several hours away from the city. No, I don't miss the malls or the latest movie releases or the endless weddings and thread ceremonies, and I most definitely don't miss the boorish loudspeakers and the pollution, she told everyone who asked, in her usual candid manner. Friends drove in occasionally to see her, bringing her treats from the city that she could not find there in the village, like those buttery mini coconut cakes from the National Bakery (Mrs. Kumar had a legendary fondness for sweets) and Amul cheese. They came expecting to sneer at this boring old village but instead could not help being charmed and soothed by the peace and the beauty surrounding the place. 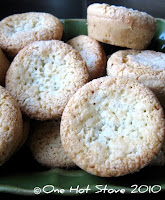 Yes, she loved her tiny home, with a small vegetable patch out front and night-blooming jasmine outside her bedroom window. The residential community in the town was small, but there were quite a few stores, vendors and tiny restaurants to cater to the tourists and campers who passed through. She liked the down to earth neighbors and the thought of someone invading their secluded community frightened her just a little. Three homes had been broken into. The thief seemed to come here almost every day- the brazen rascal!

The next day, as Mrs. Kumar walked back from the vegetable seller carrying sweet tiny eggplants for the night's dinner, along with a small packet of gulkand burfi that she simply could not resist, she found the inspector standing at a street corner, staring thoughtfully at the ground. "Not again", Mrs. Kumar exclaimed. "Yes, yes", the police inspector replied with a mixture of tiredness and annoyance. Yet again, a home had been robbed the previous night. Yet again, no one had seen the thief and he had vanished into the night. Yet again, the discarded food wrappers were the only clue that he had been there. The inspector had plenty to do without the townspeople hounding him for answers.

Mrs. Kumar gave the inspector a withering look- the sort she saved for her most impossible students in years past. "Are those the food wrappers?", she asked, pointing to the crumpled papers in the inspector's hands, then took them in her own hands and smoothed them out. "Yes, same ones every day", the inspector said. A minute later, she was talking to the inspector in an urgent whisper and he was listening intently.

The following night, the inspector came around knocking on doors, grinning triumphantly and telling neighbors that the jewel thief had been caught; he had been wanted for theft in the big town and had recently switched to working the smaller towns where homes were less secure.

"Mrs. Kumar cracked the case. She told me exactly where I should go to find the thief. We called in extra help, staked the place and followed everyone who came there. Sure enough, one of them slunk away to hide in the bushes behind this neighborhood and we apprehended him", he told the puzzled crowd.

Mrs. Kumar beamed- "I only had to look at the discarded food wrapper. It was a page from an old FilmFare magazine, stained with small blotches of oil. And you know, of course, that there's only one vendor in town who is selling fried snacks wrapped in that particular magazine paper- the one at the side entrance of the bus depot. He sells the best garam-garam jalebis. You simply must try them".


* * *
I imagine that the mini coconut cakes that Mrs. Kumar was so fond of were similar to these coconut muffins. In my quest to eat down the pantry this month, I was looking to use up some sweet rice flour (much stickier than the rice flour we use in India, because it made from glutinous high-starch short grain rice). Compared to most recipes for Asian sweets using this flour, this recipe is an easy gluten-free cake recipe that sounded just so good. I added cardamom for an aromatic Indian touch, halved the recipe and baked in muffin cups because the reviewers of the original recipe praised the crust, and muffins have a high crust to crumb ratio. 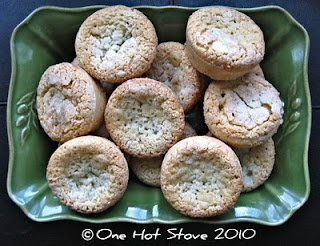 (adapted from this recipe from Epicurious, makes about 15 muffins)

Confession: I messed up while making this recipe and forgot to add sugar- aargh! Multitasking just does not work sometimes. I realized the sugar omission after the muffins had been in the oven for 5 minutes and yelped in horror. Neighbor Girl was visiting and came running to the kitchen and we pulled the muffins out and sprinkled some sugar on each one. Neighbor Girl tells me, "Don't look so upset. Maybe this will be like the penicillin thing where adding sugar on top is a new discovery". Yeah, right. But in the end, they tasted pretty fine, with the sugary crust. Healthier, actually ;)

If I make this recipe again (and I am positive I will), I might add some fresh (or thawed frozen) grated coconut to the batter. The muffins tasted fantastic, very reminiscent of the rice-coconut-cardamom flavors of modak or karanji. And very easy to veganize, I imagine, just by using an egg substitute. The rice flour makes the muffins light and tender with an interesting chewy texture and crispy exterior. At least this is what they tasted like a few minutes ago, fresh from the oven. I'll update the post tomorrow with how the muffins taste after a day of being made.

Have a sweet evening, everyone.
Posted by Nupur at 8:43 PM