Just under the wire, I'm sending in another entry to the CopyCat edition of the Blog Bites event hosted right here on One Hot Stove.

I wanted to bring a dish to a birthday party today and decided on a street food that I have not eaten in a while- Kutchi dabeli. This is a carb-lover's delight, a spicy mashed potato filling (along with assorted goodies like fried peanuts, tangy tamarind chutney, pomegranate seeds and bits of onion and cilantro) in an airy bread roll or pav.

For me, Kutchi dabeli will always be associated with trips to my aunt's home in a suburb of Pune. If I understand correctly, this snack originates in Gujarat (Kutch is the largest district in Gujarat) and can be found sold in street stalls wherever the Gujarati diaspora now resides. My aunt would bring home paper sacks stuffed with tasty dabeli that were a little too spicy for us kids, but we wolfed them down anyway, chasing the spice with large gulps of cool water.

Today, I decided to make it completely from scratch, which meant baking the pav, making dabeli masala, cooking and mashing potatoes, roasting and skinning raw peanuts, making tamarind chutney and so on. Go ahead and use store bought versions of any of these- I won't tell. The dish described below may or may not be authentic; it is simply my version of this street classic.

A. Pav. I tried Meera's recipe for laadi pav with incredible success. Check her post for proportions. I made smaller rolls- a feeble attempt at portion control.
1. In the food processor fitted with a dough blade, add the bread flour (I'm loyal to the King Arthur brand), salt, sugar, yeast, olive oil. Start processing and dribble warm water to make an elastic dough.
2. Oil the dough and let it rise for an hour.
3. Deflate the dough and divide it into 24 rolls (3 x 2 x 2 x 2).
4. Place rolls on baking sheets, cover and let them rise for an hour.
5. Bake at 400 F for 15-20 minutes. 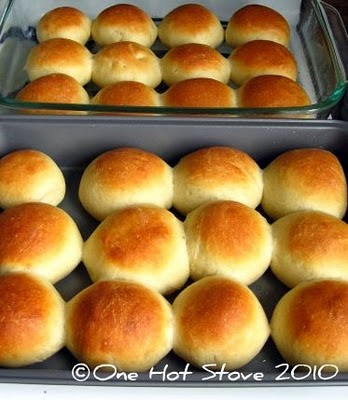 Just look at these chubby little rolls! The texture and flavor was perfect. I'll be using these as mini burger buns in the coming months.

Next, for the dabeli, I used Tarla Dalal's recipe as noted by Ashwini of Food for Thought.

B. Dabeli Masala: you can buy this spice mix in stores but it is easy enough to make. There's a simple mnemonic to remember the formula for this masala: 5 Cs

Lightly roast everything together, then grind to a fine powder.

D. Tamarind chutney: Recipe here. You need 1/4 cup or so.

E. Potato filling: Boil, peel and mash 3-4 large potatoes. Heat 2 tsp. oil and add 1 tsp. cumin seeds, pinch of asafetida and 1 tbsp. dabeli masala (or more to taste). Stir in the mashed potatoes and salt to taste, fry for a minute or two.

Cool the potato mixture, then add a handful of minced cilantro, 1/4 cup minced onion, and the fried peanuts and tamarind chutney previously made. Mix everything together. Now is the time to taste it and add more spice or salt or chutney as required to get the filling to be absolutely delectable.

F. We are almost there, hang on. To assemble the dabeli, cut each pav into half. Sandwich the halves with a generous amount of potato filling, pomegranate seeds (I use halved sweet grapes as a substitute when I can't find these) and sev (I skipped the sev because I had none on hand). 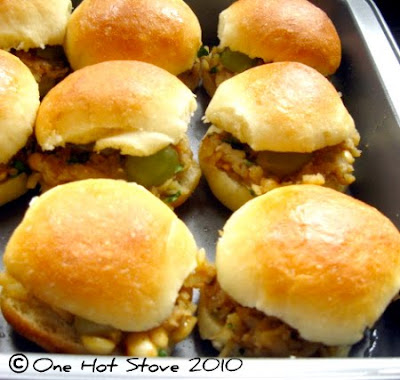 G. Finish line. Choose the biggest dabeli for yourself; you deserve it if you made it this far. Take a big bite and enjoy the medley of flavors from the warm spices, airy bread, sweet burst of grapes and the crunch of the peanuts. Nom nom nom.

My big tray of dabelis disappeared at the party. That's the proof of the pudding, as they say.

Entries for this event are being accepted for a few more hours; check back tomorrow evening for a tasty buffet of entries, and a chance to vote for your favorite post.
Posted by Nupur at 8:17 PM