The Singing Chef's in my Kitchen

Thanks to everyone who played along in the guessing game at the end of my last post. There were several guesses along the lines of edible stuff as one might expect to see in a cooking pot, including noodles, sevai, vermicelli, spaghetti squash and sev for falooda, which is one thing I really wish I was making!

Milli was the first to guess the correct answer, which is that I was dyeing wool in the pot. Others, including R, Pavani, Amruta, Shirley and Garden Dreamer also guessed that this was wool/yarn.

The picture indeed was of white wool being dyed with unsweetened orange kool-aid (an artificial drink mix, similar to the brand Rasna in India), a technique described in this Knitty tutorial. It is as easy as heating wool in bright kool-aid solution. The wool soaks up the dye leaving clear water behind; it is quite fascinating to see dye being pulled out of the orange water.

I ended up with this skein of yarn. I was going for a saturated orange color for a particular project so it looks like I have to buy a couple more sachets and give this skein another dunking. 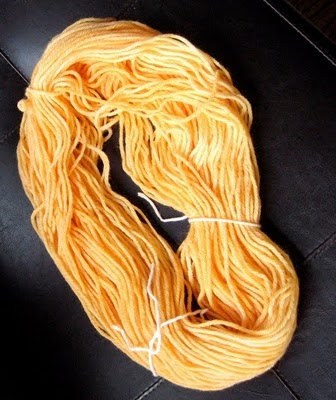 It is a little scary to think that people drink stuff that can permanently dye fibers, but maybe that's not an entirely fair statement. After all, turmeric is an all-natural plant product and has terrific culinary and medicinal uses but also dyes fabric permanently as many cooks find out only too late when their favorite dishcloth or apron or outfit is adorned by a bright yellow turmeric stain. Ask me how I know.


* * *
This Sunday, I was watching PBS Create on TV and stumbled on an episode of this show called Bloggers: Confessions of the Food-Obsessed. They interviewed Pim and I turned to V and said- the pad thai that you love, I got the recipe from her blog. They interviewed David Lebovitz and I said to V- the butterscotch candy that you love, I got the recipe from his blog. It is true, most of my favorite recipes come from other blogs and I always think of the blogger with gratitude when we sit down to dinner and enjoy a particular dish.

So I was excited to see that The Singing Chef was chosen as blog of the month for this month's edition of Tried and Tasted, hosted at Dil Se. Raaga has hundreds of recipes for everything from baked goodies to everyday vegetable dishes. One of my grandmothers was Konkani and I grew up tasting some of that wonderful cuisine, so I especially like the typical Konkani dishes that Raaga shares.

The first recipe I tried was panpole, meaning leafy dosas. I have a theory that recipes that call for very few ingredients are often the most challenging to make. This one has all of two ingredients, rice and coconut, ground together to a batter. You need a bit of water for the batter, salt for seasoning and oil to make dosas, and that is it.

The dosas were just a little tricky to make in the beginning. My first two could not be called "leafy" by any stretch of the imagination. But I caught on and began making fairly good panpole after the first few attempts.

These dosas are fragrant and delicate and absolutely melt in the mouth. We enjoyed them with some incredible podi from the famous Ambika store in Chennai, a kind gift from a friend. 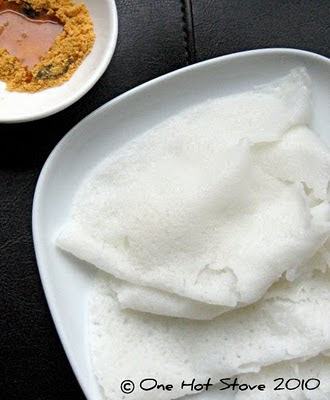 Another recipe that I tried from Raaga's blog was Chow Chow. I love recipes with  goofy names. Before reading her post, I had no idea what chow chow could mean, other than slang for "eating". Well, her post taught me some three different definitions for this term; talk about getting an education. It is a dish invented by a clever caterer that uses a medley of vegetables and cooks them in pickling spices. I'm sold. I adapted Raaga's recipe, so I'm jotting it down here. 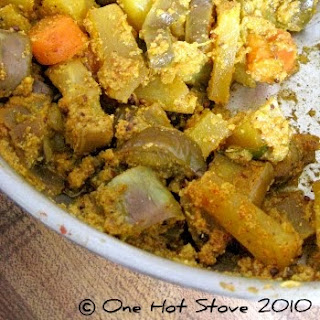 
3. Add the following vegetables (or other vegetables that you have on hand) and saute well
1 large carrot, diced
2 Japanese eggplants, diced
1 large potato, diced

4. Add salt to taste, a little water and cover and cook the vegetables until they are barely tender.

6. Cook for a few more minutes.

This is an unusual and excellent vegetable dish- the mustardy paste makes the dish very tasty. What a great way to clean out the crisper.

I'll see you in exactly three days with the round-up of Blog Bites: Cookers and an announcement of the theme for the next edition.
Posted by Nupur at 9:34 AM