Sometimes, a little vegetable goes a long way. I bought a modest wedge of pumpkin last Saturday, and sweet and nutrition dense as it is, it fed us three times over- I used a third of the wedge for pumpkin kaap (made the same way as these but using pumpkin slices instead of eggplant), a third for the excellent pumpkin dhansak from Nandita's blog, and the last portion for this soup.

The inky, muddy look of black bean soup is just a facade; underneath the surface is nothing but tasty goodness. Pumpkin adds a beautiful sweetness that sets off the earthy legume. As soups go, this one is fairly simple, with three main ingredients, pumpkin, black beans and tomatoes, and two seasonings, chipotle chillies and cumin. I debated about adding other ingredients like bell peppers and corn, but in the end, the simplicity is what makes this soup special.
The recipe below is infinitely flexible. If you don't have access to chipotles in adobo, use any chilli powder, or Mexican/taco seasoning or hot sauce instead. If you don't have pumpkin on hand, any winter squash such as butternut squash or acorn squash would be a wonderful substitute. Sweet potatoes would be equally at home in this recipe. For the stock, I used this homemade vegetable bouillon, a sweet gift from Alanna. It is wonderful stuff!
Black Bean Pumpkin Soup 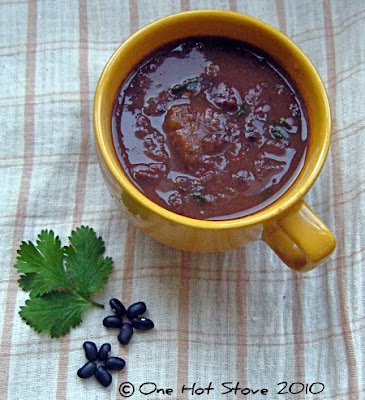 1. Soak 1 cup black beans for 8 hours or so, then rinse then thoroughly.

2. In the body of a pressure cooker, heat 1 tbsp. extra virgin olive oil.

4. Add the following spices and seasonings and stir for a few seconds-
1 heaped tsp. cumin powder
1 minced chipotle pepper in 1 tsp. adobo sauce (or to taste)

6. Pressure cook. Once the pressure is released, mash or puree the soup together, or leave it chunky. Adjust the consistency of the soup by adding water if necessary.

7. Stir in a large handful of minced cilantro and squeeze in some lime juice.

I loved the soup in its pure form, but you could top it with a dollop of thick yogurt or sour cream, some shredded cheese, or crushed tortilla chips.

I am sending this soup over to My Legume Love Affair. The 21st edition is hosted by Superchef @ Mirch Masala.


*** *** ***
We enjoyed the soup with an unlikely side- pesto eggplant pizza. I had two dough balls in the freezer, and an eggplant lurking in the crisper, and just put the two together.

The pizza dough recipe is my new favorite- it is Peter Reinhart's Napoletana Pizza Dough posted here on 101 Cookbooks.

I made the recipe by hand and followed the instructions very closely. It is a strange recipe, in the sense that you use chilled flour and ice cold water to make the dough. The recipe made 6 pizza dough balls, and each is sufficient for an individual sized pizza- depending on the individual. I know certain individuals (who shall go unnamed) who can scarf down a couple of these in one sitting!

Another thing I learned was to place the pizza stone on the floor of my gas oven instead of on a rack. When baked at 475F, the pizzas were cooked to perfection (when I used a higher temp, the bottom of the pizza burned before the toppings were bubbly).

But, wow, the pizzas are incredibly close to what you get in "good" pizza places, like The Good Pie here in St. Louis. This recipe uses no whole grain, but for an occasional restaurant-style treat, that's OK by me. 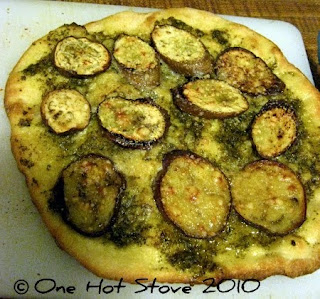 I had a large bolt of cotton fabric from Ikea, an impulse purchase which was sitting in a corner of the closet for more than a year. The big idea was to use it to make a tablecloth from it, and if there was fabric left over, to make some cloth napkins. But I don't own a sewing machine to make the hems and keep the edges from fraying and so the project was shelved, quite literally.

Well, your comments on this post were inspiring to say the least, and they spurred me into action. I did a web search for "no sew cloth napkins" and found this. An hour later, I ran into my next door neighbor in the elevator and asked her if she happened to own pinking shears. Minutes later, I borrowed her pinking shears and folded and ripped the bolt of fabric into one tablecloth and 16 cloth napkins. Ta da! 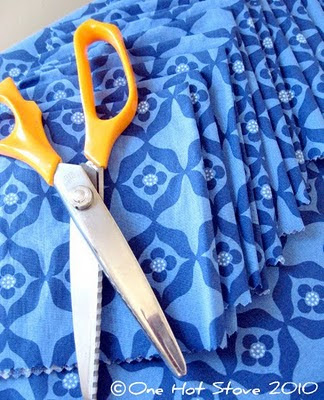 We had a dozen friends over for an Oscar-watching potluck party on Sunday night and I was so proud that we used regular plates and glasses (so what if they were all mismatched), metal cutlery and cloth napkins. No waste from disposables. It is the little things that make me inordinately happy.

Please keep sharing the green tips- I'm always looking for inspiration.
Posted by Nupur at 9:19 AM