It is a snowy weekend here in St. Louis, and in most of the US actually. It has liberated us from the usual weekend chores like food shopping and given us permission to huddle in and do nothing in particular. Dog-walking is the one chore that must go on regardless of the weather- in fact, the streets are quite deserted except for the parade of shivering humans trying to stay warm while their frisky dogs run around in fur coats. Like his buddies, Dale is quite nonchalant about the snow. Here he is, giving us the, "What are y'all waiting for? Let's play" look: 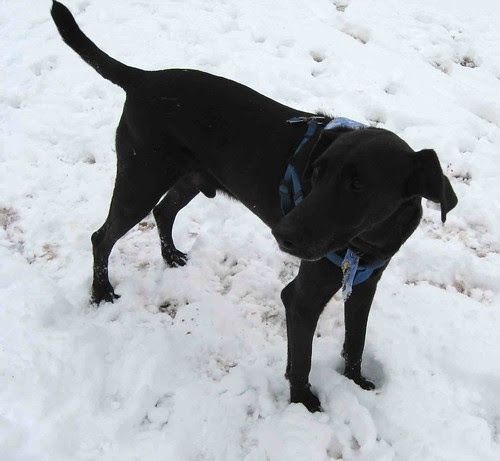 Paw-prints in the snows of time? 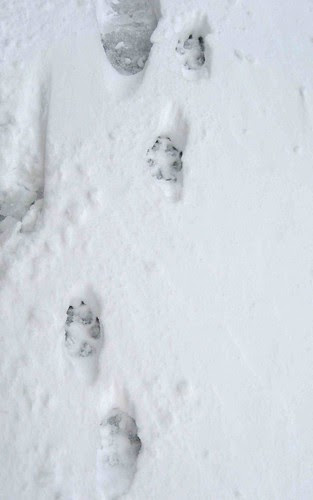 Dale can provide comic relief even in the bleakest of weather. At one point, he got tired and sat down in the snow, only to spring back up with this expression :D 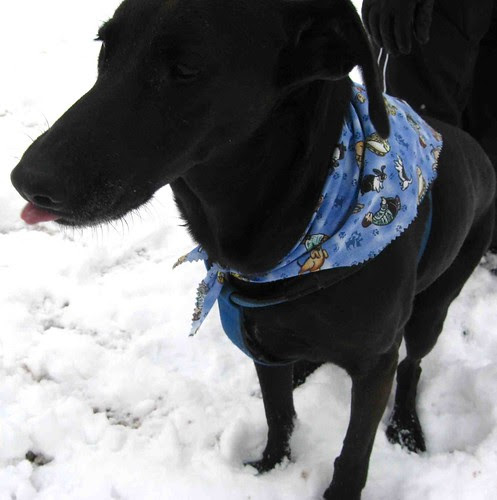 Ready to walk home and warm up by the radiator: 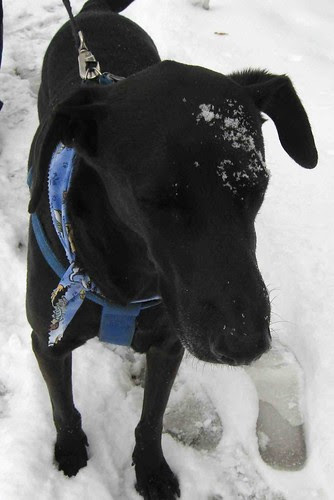 Last night, we were all set to walk down to our neighborhood chocolatier to get a cup of cocoa when the snow started coming down in full force. One look at the whiteout and I decided to make some hot chocolate at home instead. Normally, I just use cocoa powder, sugar and milk to whip up a simple cup, but I had a tiny bit of cream and a chocolate bar on hand and decided to make it a bit decadent. The addition of chocolate ganache really makes hot chocolate dreamily thick and sinfully delicious. It reminded us of our favorite hot chocolate from the City Bakery in Manhattan (although that stuff should be called chocolate bisque or chowder; that's how thick it is). It would be fun to try and replicate some of the flavors from their Hot Chocolate festival.

Please make every effort to buy fair-trade chocolate and cocoa. Chocolate tastes so much better when exploitation is not one of the ingredients. 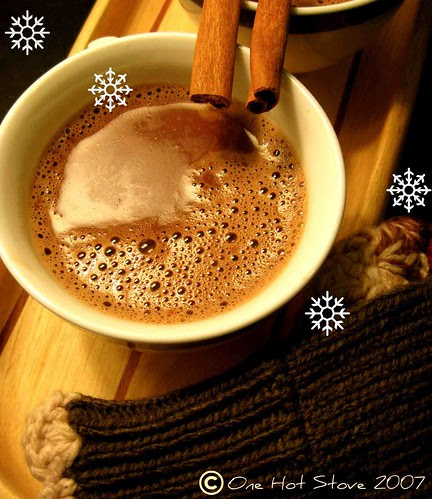 1. Place 4 squares of bittersweet chocolate in a bowl.
2. In a small saucepan, heat 3-4 T heavy cream until it is near-boiling, then pour it over the chocolate pieces. Let the chocolate melt, then whisk the cream and melted chocolate together.
3. In the same saucepan, heat 1.5 C milk along with 2-3 t sugar (or to taste), a pinch of salt, 1 T cocoa powder and a cinnamon stick. Boil the mixture briefly and turn off the heat. Stir in the chocolate ganache and 1 t vanilla extract. Strain the hot chocolate into 2 cups and serve hot.

I can't believe there have been three chocolate recipes on this blog this month! Call it winter madness. I am sending this steaming hot chocolate to Deepz who is hosting JFI: Chocolate this month. Now that promises to be one sweet round-up!

*** *** *** *** ***
I've been peeking into some of my favorite blogs and trying some new recipes from them. While I did not remember to take any pictures, I could not resist sharing the links with you:

1. Khara Buns from Shilpa: It started when the Daring Bakers took on Tender Potato Bread as their challenge this month. The King Arthur Flour Baker's Companion, a veritable textbook of baking, says that many traditional American bread recipes called for using cooked potato or potato water (the cloudy water left over from cooking potatoes) as an ingredient in the dough. This practice started before baker's yeast was commercially available, and the starch content of potato and potato water served to attract wild yeast from the air and provide them a nutritious buffet while the bugs went to work. The starch also keeps the baked bread moist by hanging on to water due to its hygroscopic nature. Today, even though we pour out yeast from handy little sachets, the starchy potato does help to feed the ravenous yeast and results in moist tender bread. Anyway, I watched wide-eyed as the foccacias, loaves and rolls were displayed on the Daring Baker blogs this month, but did not seriously think of trying out the recipe because it makes a *huge* batch. Then Shilpa came along and solved the problem for me: her khara (savory) buns use a scaled down version of the recipe that is just perfect for a small family, AND she converted the basic recipe into irresistible stuffed buns- the stuffing is the spicy onion filling that many of us love from bakeries in India. While no one in their right mind would call me either daring or a baker, I succumbed to the lure of the stuffed buns and tried the recipe. Shilpa gives detailed and precise instructions and I followed them as I closely as I could. I did add some peas and carrots to the filling to make it more substantial. The dough turned out to be the stickiest dough I have ever encountered. Part of it is that potato dough is sticky by nature and perhaps I aggravated it by using a little too much potato (2 small potatoes instead of a medium one) and water that was slightly more than 3/4 C. But by generously flouring my hands, I was able to manipulate the dough quite easily. It rose beautifully, and I turned it into 6 filled buns, served with a big bowl of tomato soup. This bread is unbelievable- the outside was crunchy and crisp and the inside was fluffy and soft. Every bite was a treat! Leftover buns reheat very well: I popped them into the toaster oven for 10 minutes the next day and they were crispy and delicious all over again. This potato bread is a keeper: next time, I will be using it to make pizza crusts. 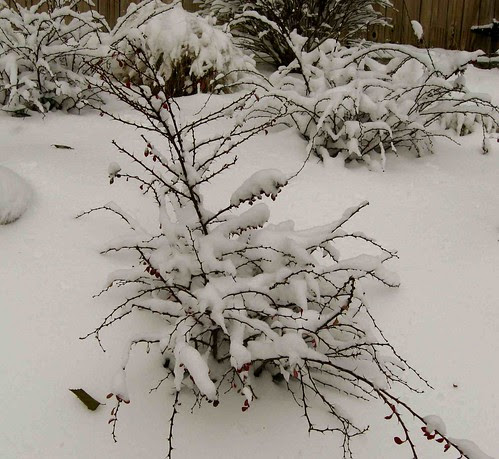 2. Palak Kadhi from Musical: snowy, stormy weather simply screams out for the comfort of steamed rice with some kadhi, what could be loosely described as a curry that is often based on chickpea flour and buttermilk. Musical never fails to amaze me with her simple and flavorful fare, and this kadhi is no exception- it comes together in minutes, includes a healthy dose of greens, and feeds the body and soul all at once. The most delightful moment of making this kadhi came when I had tipped the four whole seeds (coriander, cumin, nigella and fenugreek) into hot oil along with the onions. At this moment, the aroma that wafted up was *exactly* and unmistakably what I associate with good Punjabi restaurants. Heavenly! I made the kadhi with frozen chopped spinach, being unable to go to the Farmers' market due to the storm, and it worked just fine. I think this kadhi is going to be a staple in our home all winter long. 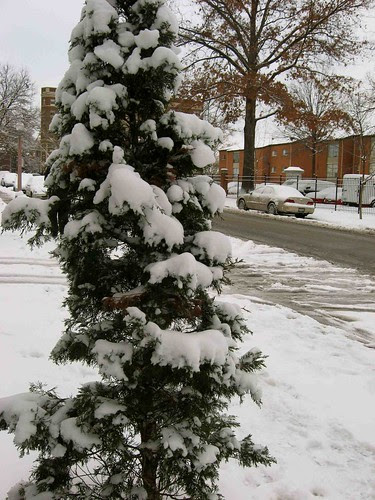 3. Methi Mushroom Curry from Nandita: This is one recipe for those times when you are craving Indian restaurant-style curries. Kasuri methi is one ingredient that can really take home cooking to the next level with its unmistakable taste and aroma, in my humble opinion. Here, it is cooked with some juicy mushrooms and a thick onion-tomato gravy that is finished with some yogurt-besan paste to get it to just the right level of creaminess sans the cream. My minor changes to the recipe: I did not add mustard seeds to the tempering. I used more onions and tomatoes to make more of a curry for the dish. And I added a dash of my mom's magic masala (cloves, cinnamon, cardamom) at the end of cooking. This is absolutely delicious!

Have a great week ahead!
Posted by Nupur at 9:07 AM