...or Using Your Noodle.

Two games to play on a rainy afternoon, using dried pasta from the pantry. Once you are done playing with your food, you can eat it for dinner! 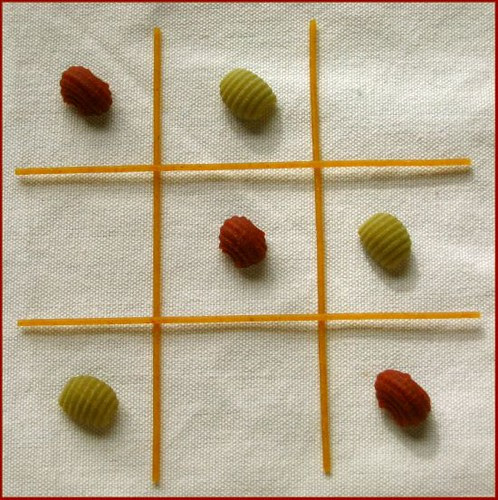 Tic Tac Toe (known to many as "noughts and crosses") was played here using whole wheat spaghetti to set up the board and some calypso blend pasta as the pieces. Anyone remember playing this game with a friend at the back of the lecture hall in Junior college? 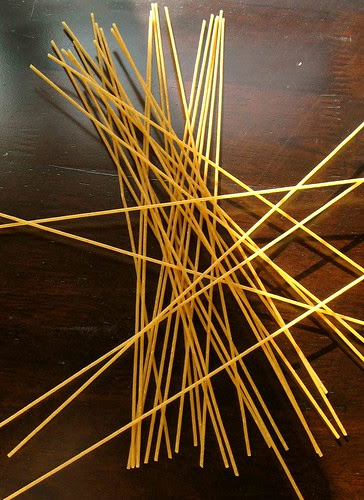 This is a very neat game I played with my cousins for hours on end. It is called Pick-Up Sticks and various other names like that. You hold a handful of thin sticks (usually made of wood or plastic, but dried long pasta is an awesome substitute) in your hand, then drop them on a surface. Then you try and pick up sticks one at a time as carefully as you can without disturbing the other sticks. You lose your turn when any other stick in the pile moves. This is a game of dexterity, skill and concentration- way more fun than you would imagine from such a simple set up. It is one of those timeless games that helped my aji keep a giggle of granddaughters occupied during hot summer afternoons, decades after she used the same faded box of sticks to keep her own kids busy during their summer vacations. Read more about this game here.

The first picture is being sent to Jugalbandi's Click: Noodles event, just for fun!
Posted by Nupur at 11:56 AM