U is for Usal.

The "U"s of Marathi food are small in number but absolutely delicious nontheless! It stands for ukad or boiled, and that method of preparation (boiling or steaming) is used to make a variety of foods ranging from the very humble, like ukadlelya batatyachi bhaji or boiled potato curry to the very exotic, such as ukadiche modak or rice dough pockets filled with a poppy-coconut mixture and steamed for a special festive occassion. "U" also stands for a favorite Indian breakfast dish: uppit, often called upma in other parts of India, a savory risotto-like preparation of rava (semolina/cream of wheat).
Several days of the Marathi calendar are decreed as "fasting days" or upvaas, when one can eat only specific foods; for instance, sabudana (sago), potato and peanuts are OK but garlic, onions, wheat are forbidden. These fasts have an unfortunate tendency to be gender-biased (women fast for the continuing health of their husbands, and even little girls fast so they may get a good husband later in life!) so I don't care for them much. But I will say that after one has eaten all the dozens of delicious and bountiful "fast" dishes, the spirit of pious frugality and deprivation has long vanished into thin air!
Other favorite "U"s: uus or sugarcane, a crop that brings prosperity to my region of the country; it is such a treat to gnaw on fresh sugarcane sticks! uusacha ras or sugarcane juice is delicious and refreshing, especially during unhala or summer, which covers 9 months of the year in most of India (the other 3 being monsoon)!

But the absolute monarch of "U" Marathi foods is usal, a spicy curry of sprouted beans. It is hard to believe that such a simple and nourishing food can be so delicious and addictive! What's more, usal forms the base for a wonderful dish called misal, a popular snack and street food in India and Maharashtra's contribution to the world of "chaat".
The most popular usal is made with a tiny little bean called matki or "moth", available in Indian stores. Here is a picture of matki, in its dry form, and after being soaked overnight and then sprouted in a damp cloth for a couple of days. 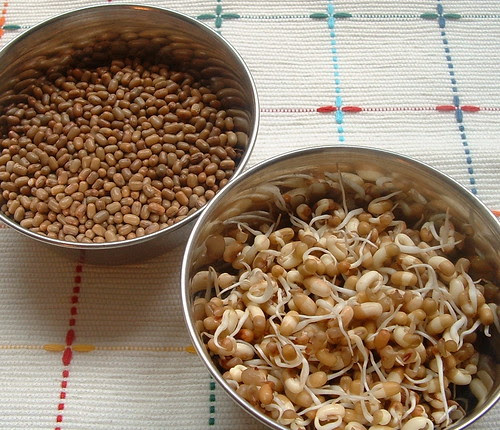 For a traditional misal feast, you first start by making the sprouted usal, which is a relatively dry preparation made by sauteeing the sprouts. Then there are many other "fixings" that are laid out to spoon onto the usal (I am describing the way it is made in Kolhapur, I expect that there are regional variations):
1. A thin soupy extremely spicy curry called "cutt", made with a spice mixture called "kolhapuri chutney"
2. Cubed boiled potatoes
3. Toasted peanuts
4. A medley of tiny fried snacks called "farsan" or "hot mixture", easily available in all Indian grocery stores
5. Minced raw onions
6. Minced fresh cilantro
7. Slices of fresh lemon
8. Whipped plain yogurt
9. Sweet and sour (jaggery-tamarind) chutney
10. Slices of bread

Lazy as I am, I drastically simplify the whole process. I make the "usal" soupy in the first place by adding kolhapuri masala right into the usal itself (thus eliminating the "cutt"). I also add peanuts and potatoes to the curry itself. Finally I add some jaggery and tamarind into the curry to get the sweet-sour taste in there. I feel like this really cuts down on prep time when you have a misal party. This is a great make-ahead one-pot dish, and a crowd-pleaser at that.

We start with the all-important spice mixture, the kolhapuri chutney. I get mine ready-made from Kolhapur (it is made by a women's co-operative food business and is absolutely outstanding). But it is not very hard to make and I give you a recipe below (sent by my mom).

(Kolhapuri Masala)
Ingredients
1 cup red chilli powder
1 cup coriander seeds
1 tbsp cumin seeds
1/2 cup shredded dry coconut (unsweetened)
1 tbsp sesame seeds
1/2 tbsp black peppercorns
1/2 inch cinnamon stick
1/2 tbsp cloves
1 tsp fennel seeds
1/2 cup onions, roughly chopped
8-10 garlic cloves
1 cup cilantro leaves, patted dry and minced
2 tbsp oil
Method:
1. Toast all the whole spices on a dry skillet. Set aside.
2. Fry all ingredients (except red chilli powder) together in oil till dry and browned.
3. Grind the fried stuff to a fine powder.
4. Mix with the red chilli powder.
5. Cool and store in an air-tight container in the refrigerator.
Note: This spice mixture is made with fresh onions so please take care that they get well-browned and dry, otherwise the chutney will spoil. You might want to cut the recipe down to 1/4 or so, since the quantities given are pretty large. Once the chutney is ready, usal is made in minutes. 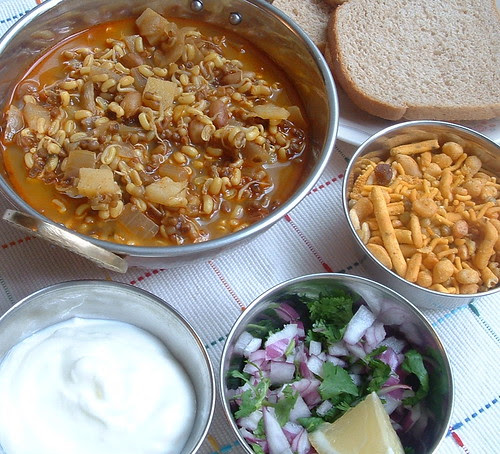 
Usal update
My mother tells me that my method for usal is a lazy, short-cut one. For misal that tastes much better, this is what she does. Instead of just adding the Kolhapuri chutney (in step 2), she makes a masala paste. In a pan, saute 2 chopped onions until browned, then add 1/2 C grated fresh/frozen coconut and 1 T Kolhapuri masala. Stir until toasty and browned. Cool this mixture and grind it to a fine paste. Add this paste instead of merely the spice powder in step 2. 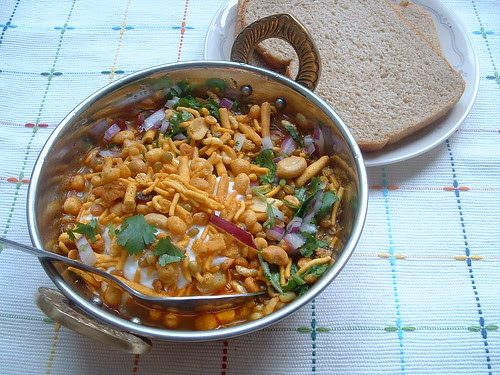 To put together the misal, set out bowlfuls of any or all of the fixings listed above: fresh yogurt, minced onion/cilantro, fresh lemon, "hot mixture" and slices of your favorite bread. Let everyone assembly their own misal to their taste.
A couple of notes:
1. If you have no time to make the masala, consider simply adding the components to the usal; I think garlic paste, coriander powder, cumin powder, red chilli powder and garam masala might be an acceptable approximation.
2. If you cannot find matki beans, try using some other ones like "moong" or even a combination of different beans (all sprouted of course).
3. I have used crushed potato chips as an alternative to the hot mixture and they work quite well to provide that "crunch".
4. You can cut down on the spice as much as you like. A mildly spiced usal combined with dollops of yogurt is an extremely nourishing meal in itself.

We meet soon for the "V" of Marathi food; as usual, I love your suggestions and look forward to them. By the way, One Hot Stove celebrates its first birthday this coming weekend, so I hope you will all join me for some cake!