Q is for QUICK BHADANG

Q is for Quick Bhadang.

The letter "Q" presented me with a challenge...this is the first letter for which I am unable to come with any Marathi food, so I am treating as a "wild card" to look at some foods that we missed along the journey. Q certainly stands for "quick", and here is a quick post with a quick recipe. Almost every home in India is stocked with a few sweet and savory snacks, for unexpected guests that might drop in, and for snacking on when mid-meal hunger pangs strike. We already looked at one such snack, Chivda, and this one called bhadang is a close cousin. Bhadang is made with puffed rice and can almost be considered "Indian popcorn". In my home-town of Kolhapur, fiery hot bhadang is sold in small paper cones by street vendors, and can be spiked with chopped onions, cilantro and a squeeze of lemon juice on request. It is one of life's little pleasures to eat handfuls of this spicy crunchy mix while sprawled on the couch reading a good book.
I made this bhadang today as part of the "chai hamper" that I pledged for the Menu for Hope fundraiser. The winner of the chai hamper is none other than Cathy! In my original pledge, I promised some chivda as part of the hamper, but Cathy visited me recently and I had made chivda then, so for a change, I made bhadang instead. I hope she likes it! Cathy, your hamper will be on its way tomorrow morning so please keep an eye out :)
Bhadang 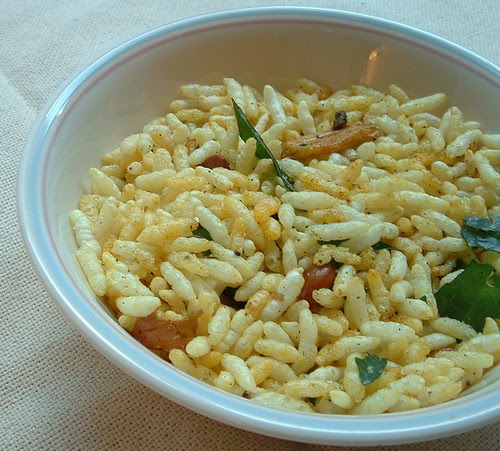 Ingredients:
6 cups puffed rice
4 tbsp oil
1 tsp cumin seeds
1 tsp mustard seeds
1/2 cup peanuts
5-6 garlic cloves
8-10 curry leaves
1/4 cup raisins
1 tsp salt
1 tbsp sugar
1/2 tsp turmeric
1 tsp red chilli powder
Method:
1. Heat oil in a large pot. Add cumin and mustard seeds and let them pop.
2. Add peanuts, garlic, curry leaves and saute till the garlic is lightly browned.
3. Add salt, sugar, turmeric and chilli powder and saute for a few seconds.
4. Add the puffed rice and raisins and saute on low-medium heat, stirring often till all the puffed rice is coated. Turn off heat after 3-5 minutes.
Cool and store in an air-tight tin, where it keeps indefinitely at room temperature. The garlic and curry leaves can be eaten as part of bhadang, though of course you can pick those out if you like. To make instant bhel, add some fresh lemon juice, chopped onion and cilantro to the bhadang. Come to think of it, Rice Krispies cereal could be substituted for the puffed rice, those too are very similar.
We shall meet very soon with a look at "R" so stay tuned!
Posted by Nupur at 2:26 PM