T is for THALIPEETH

T is for THALIPEETH.

Set out some cold water, have some sugar handy, and get ready; for in stark contrast to the sugary sweet letter "S", the "T" of Marathi food is fiery hot! We start with tikhat, the Marathi word for "spicy" which is also the word generally used for red chilli powder, a ubiquitous component of every Indian spice box. Salt and red chilli powder can be used to make simple puris or fried breads called tikhta-mithachya purya, a staple snack for picnics and on journeys, for they keep well and taste good even days after being fried. "T" is also the word for the spiciest chutney of all, thecha, in which chillies (red or green) are pounded together with salt and maybe some garlic to a paste that is eaten with thick flatbreads (bhakri) for a simple frugal meal. "Thecha" is actually the Marathi word for "pounding". Another "T" spice-box component is tamalpatra or bayleaves, lending their subtle flavor to so many dishes.
One "T" food that finds its way into many savory foods is tomato. You notice that the word is exactly the same in Marathi as in English? My friend M has the sweetest grandmom who told us that tomato was completely unknown in India till only a few decades ago, when they were introduced into the Indian diet by the British who were ruling India at the time. Back in those days, M's grammy tells us, some people who were strictly vegetarian for religious reasons would not eat tomato because tomato juice was red, like blood! Despite being such a late entrant to the produce section, the tomato has successfully invaded our palate, becoming one of the most important curry bases and souring agents used today. Two of my favorite Marathi dishes in which tomatoes play a leading role are: tomato omelet, a mixture of chickpea flour (besan), chopped tomatoes and onions that is spiced and made into yummy pancakes (vegan omelets!), and tomato saar, a spicy tomato soup that is just perfect for winter evenings. Ashwini of "Food for Thought", a new Indian blogger on the block, has a wonderful recipe for tomato saar.
In the produce section, "T" stands for tondli and Indira of "Mahanandi" has beautifully described this vegetable.
After all this spicy food, we need to cool down with some taak or buttermilk, which tastes wonderful as an accompaniment to all Indian meals.
Finally, we end on a sweet note: "T" stands for til or sesame, used in this season to make tilgul, small balls of jaggery (unrefined sugar) and sesame...delicious treats! Here is a picture of some that I bought from the store last week: 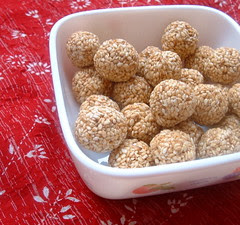 Now for the burning question: What am I making for the "T" food today? The answer really was obvious to me from the beginning...I am making a very popular Marathi dish called thalipeeth. It is a multi-grain mildly spiced pancake that is simply bursting with flavor and nutrition. The recipes for thalipeeth really vary widely, but I am giving you my favorite version here. In Maharashtra, a particular flour mixture called "bhajani" is widely sold (it can also be made at home). It consists of many different types of grains...wheat, sorghum, millet, rice, corn...plus some dals and spices, all roasted and ground into a wonderful aromatic flour. This can be used as a base for thalipeeth, as well as to make many kinds of savory snacks. I don't find bhajani flour in Indian stores in the US, so I simply mixed some flours that I had on hand to replicate the taste. Needless to say, the combination of so many grains is very tasty and nutritious. 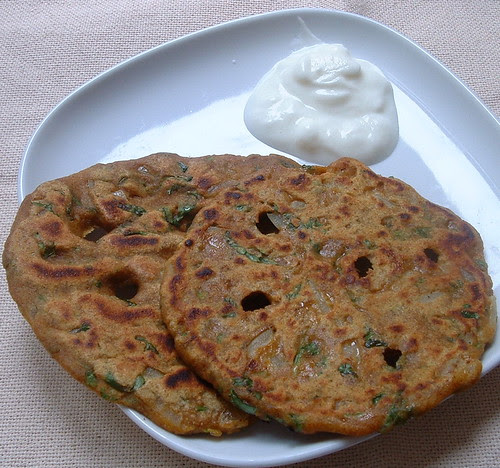 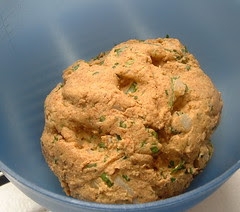 The dough is fairly sticky and the traditional way is to use your hands to pat it into a pancake before cooking it. A thick plastic bag rubbed with some oil is ideal as a work surface. Oil the bag, then oil your hands lightly and place a golf-ball sized ball of dough on the plastic. Use the tips of your hands to pat the dough into a flat shape. Make a few small holes in the pancake (while cooking, you can slip drops of oil into these holes to cook the thalipeeth more evenly). Heat 1 tsp oil in a non-stick pan. Gently turn the plastic sheet upside down and ease off the thalipeeth onto the pan. Use a small spoon to place tiny drops of oil into the holes in the thalipeeth. Cook till browned and crispy on both sides.
The traditional way to serve thalipeeth is with green chutney and either some plain yogurt or a dollop of butter.
See you soon, with "U" and I know what I will making! Can you guess?