S is for SOLKADI and SHEERA

S is for Solkadi and Sheera.

"S" is the Marathi letter of sugar, syrupy and sweet! It all starts with the basic pantry sweetener sakhar or sugar. The words in Marathi and English sound quite similar, don't they? The words for "sugar" seem to have ancient roots in different languages, and here is a very interesting study exploring those origins. Many Marathi pantry staples used to make sweet foods are also "S" words, such as saay or cream, which is often used to churn home-made butter, which is then clarified to ghee (and most Indian sweets are positively dripping with ghee!); shengdana or peanuts, used to make tasty "chikki" or peanut brittle; and shevaya or vermicelli, the only noodle I can think of that is commonly used in Marathi food, most often to make kheer. Another pantry staple is sabudana or pearl tapioca, used to make delicious khichdi and also to make a sweet kheer.
Other "S" desserts abound: the simplest one is called shikran, ripe bananas folded into some whole milk and sprinkled with sugar (one of those weeknight desserts that is popular with kids); shrikhand or flavored thick yogurt, and Lulu from the blog "Lulu loves Manhattan" gives a easy recipe for home-made shrikhand. More dessert, anyone? Sutarfeni is a rich besan-based dessert that vaguely reminds me of some mid-Eastern desserts; you can see a picture here.
An "S" snack is shankarpale, little fried diamond shapes that can be sweet or savoury. They are traditionally made for the festival of Diwali. "S" also stands for a whole family of beverages called sarbat, all fruit-based syrups that can be made and stored for months in the pantry, ready to be diluted with chilled water to make a quick refreshing drink. A great alternative to soda!
So what am I making for the "S" food today? Well, to be honest, all these endless desserts are cloying, and my tastebuds need a break: so I am going to make a beverage called solkadi. This is a drink made with coconut milk, flavors such as garlic, and an unusual fruit called "kokum"...the combination of which makes for a drink that has a unique sweet-spicy-sour flavor that is utterly and completely refreshing!
Now, most Indian dishes call for some sour flavor component that gives a slight tang: commonly these are yogurt or tomato or tamarind or lemon juice. The "kokum" is a sour tropical fruit. In its fresh form, it can be cut in half, seeds scooped out, the two halves of the fruit packed with sugar and stored in a jar in the sun. After days or weeks, the sugar dissolves into the fruit pulp, and the result is a tangy syrup...you guessed it, kokum sarbat. This can be made into a drink that is simply heavenly on a sweltering hot summer day (which in India, is almost three-quarters of the year). But another way to use the kokum fruit is to dry the peel, packed with salt as a preservative. It is used in this form as a souring agent in many curries etc. The "sol" in solkadi comes from the fact that kokum is also called "amsul" or "sol". The dark purple color of the kokum gives a pretty pale pink hue to the solkadi. This is what kokum looks like: 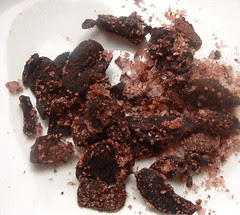 The two main components of solkadi are kokum and coconut, both of which grow abundantly in the hot humid coast of Maharashtra, and so solkadi is a coastal specialty. The solkadi can be served as a cold soup/appetizer, or in a small bowl along with the main meal. Some people also like sipping it at the end of the meal as a cooling digestive. My aunt CM in Bombay often serves the cool mild solkadi with spicy egg pulao. I simply love this combination and that is how I made it today. 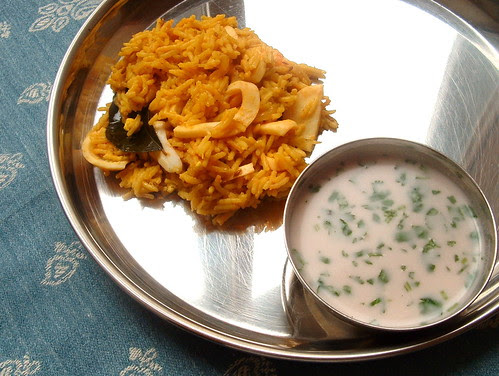 Ingredients:
8-10 dried kokum (about 1/2 cup loosely packed), shake off excess salt
1 can coconut milk
2 cloves garlic, coarsely chopped
3-4 green chillies, each cut into 3 pieces
1 tsp peppercorns, coarsely crushed
4 tbsp cilantro, divided
salt to taste
Method:
1. Place kokum in a bowl. Pour 1 cup boiling water on the kokum. Leave to steep for 1 hour.
2. Add garlic, chillies, peppercorns, 2 tbsp cilantro and salt to the kokum-water and leave to steep for another hour.
3. Add coconut milk and mix well (either use your hands, or place the mixture in a tightly-closed container and shake vigorously). The idea is to flavor the liquid well with the spices and extract all the sourness from the kokum.
4. Strain the mixture through a coarse sieve into a fresh container. Garnish with cilantro. Serve chilled in small bowls or glasses.

That was our main course, but I just cannot end the "S" post without a dessert: so here is an easy dessert in which the amount of sugar can be adjusted to suit your palate. Sheera is a stove-top semolina pudding and is best served warm, making it an ideal winter dessert. Traditionally, sheera is made for religious events and served in little paper cups as "prasad" or an offering to the diety. I love eating it with sliced bananas as a special treat. The method of making sheera is similar to that of risotto in that hot liquid is added to grain and stirred constantly for a creamy result. You can find cream of wheat in the breakfast aisle of any US supermarket while the same product is sold as "rava" in Indian stores. 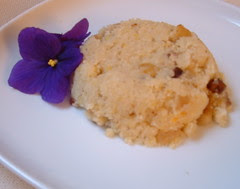 Ingredients:
1 cup rava (cream of wheat/semolina/farina)
2 tbsp ghee/butter
1 cup water
1 cup milk
3 tbsp sugar (or to taste)
1/2 cup chopped mixed nuts (any combo of almonds, cashews, pistachios, walnuts)
2 tbsp raisins
1 tsp cardamom powder
few strands saffron (optional)
Method:
1. Heat the ghee in a saucepan and saute the rava till it is toasty and fragrant.
2. Meanwhile, heat the water and milk together till it is simmering. Add the saffron strands, if using.
3. Add the sugar to the toasted rava and stir together.
4. Add the nuts and raisins and saute for a minute more.
5. Pour in the hot water/milk (carefully...it will bubble vigorously!) and stir constantly for several minutes till the pudding is thick and creamy.
6. Stir in the cardamom. Serve warm, topped with ripe banana slices, if desired.
I hope you enjoyed this sweet letter. We will meet soon with the letter "T". As usual, suggestions are appreciated!