P is for PITHALE

P is for Pithale.

"P" is a glorious letter for Marathi food. "P" is the letter of a whole lot of foods associated with feasting and in contrast, it also stands for one of the humblest foods that I can think of...we shall look at them all. First come a plethora of flatbreads: starting with the very simple poli (another name for chapati), a bread made with wheat flour and baked on a griddle. A more complicated version of the flatbread is the parotha or paratha, in which the dough is rolled into layers, separated by strokes of oil, resulting in a flaky puffy bread. Parothas can be enhanced by stuffing cooked spiced vegetables into them, for instance batata-parotha (or aloo paratha) is a favorite breakfast and lunch dish. The most festive flatbread, reserved for special occasions, is the puri or bread fried till is puffy and golden, often served with potato curry and a sweet yogurt dessert called shrikhand. All the above breads are savory, but one sweet flatbread reigns supreme in Marathi cuisine, the puran-poli, a bread stuffed with a delicious sweet lentil mixture.
Next come more feast foods: pulao ("pilaf") which not a single dish but a whole group of rice dishes; and a Kolhapuri specialty called pandhra rassa ("white curry") which is a very unusual coconut and yogurt-based meat stew that can be adapted to a veggie version. No feast can be complete with those wonderful fried or roasted papads, of course! In fact, the Marathi word for feast dishes is pakwann, also a "P" word!
One popular "P" food is actually a drink: panha. You take raw mangoes (tart!), cook them with jaggery (unrefined sugar), season the resulting pulp with a pinch of cardamom, and mix in with chilled water to make a refreshing beverage.
Two other "P" words are staples in the produce section: paalak or spinach and pudina or mint. So which of these delicious dishes am I showcasing for this letter? None, actually. I am going to tell you about the most humble "P" food. It is called pithale and is a curry made entirely of chickpea flour (besan) which is cooked into a kind of savory custard. Traditionally this is eaten with a flatbread called "bhakri" but I like eating it with rotis or rice or even with some crusty bread. The wonder of pithale is that about a 1/3 of a cup of chickpea flour produces enough pithale to become a meal that serves 4! 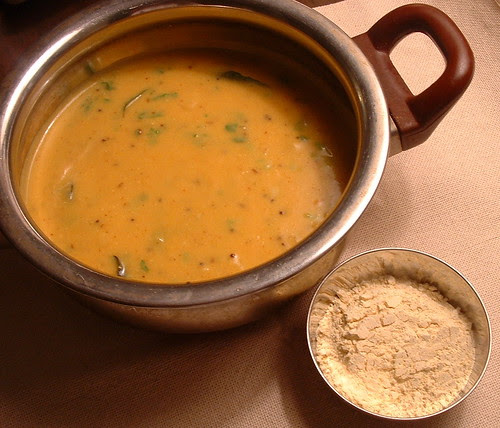 India is a land of great contrasts, where wealth and poverty, feast and famine are often painfully juxtaposed. The "P" letter foods show how this contrast is reflected in our cuisine. So here I give you the recipe for pithale, a food that uses a handful of flour to feed a family.
Pithale has numerous variations, such as these three recipes. I give you my own version, with precise quantitities that have worked consistently in my hands. As one reader said in a mail to me, "Pithale is one dish that is easy to make but easily screwable" :)

(serves 3-4)
Ingredients:
1/3 cup chickpea flour (besan)
1 small onion, minced fine
2 garlic cloves, minced fine
4-5 curry leaves
1 tsp cumin seeds
1 tsp mustard seeds
1/2 tsp turmeric
1 tsp red chilli powder
salt to taste
2 tbsp oil
1 tbsp lemon juice
2 tbsp cilantro, minced
Method:
1. In a bowl, mix the besan with 2 and a half cups water until there are no lumps (using your hands helps).
2. In a saucepan, heat the oil. Make a "tadka" with cumin and mustard seeds.
3. Add curry leaves, onion, garlic and saute for a minute or two until onion is transluscent.
4. Add turmeric, chilli powder, salt and saute for a few seconds.
5. Add the diluted besan and on low-medium heat, cook it, stirring often, till the besan cooks into a thick "custardy" consistency. (you might want to taste it to make sure that the "raw" taste is gone).
6. Take off the heat and then mix in the lemon juice and cilantro.
Serve right away with steamed rice/ bread/ rotis, with a dollop of ghee if desired.
We meet in a few days with the rather difficult "Q"!